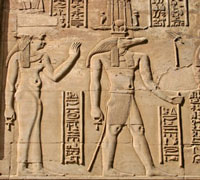 The Nile crocodile is a species that was well-known to the ancient Egyptians, who used these reptiles for a variety of purposes – even valuing their dung as a contraceptive about 4000 years ago. They actually worshipped a crocodile deity called Sobek, with this cult being based around the city of Arsinoe, in what is now known as Al Fayyum.

Variations in temperament and appearance
The ancient writer Herodotus recorded how the priests were able to recognize two different types of crocodile that lived in the River Nile, and were careful to pick the more docile and usually smaller desert crocodiles for their rituals. 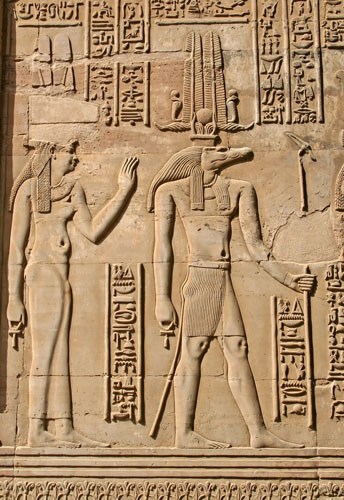 The crocodile deity Sobek, portrayed on the wall of an ancient Egyptian temple.

It became quite commonplace for these reptiles to be kept in pools in the grounds of temples. When they died, their remains were frequently mummified, and sometimes even their eggs were preserved.

Much later, in 1807, the French explorer Étienne Geoffroy Saint-Hilaire recorded distinctive variations in appearance between these mummified crocodiles, and true Nile crocodiles. Even so, for over two centuries, the so-called desert crocodile was considered to be nothing more than a localized population of the Nile crocodile at best. 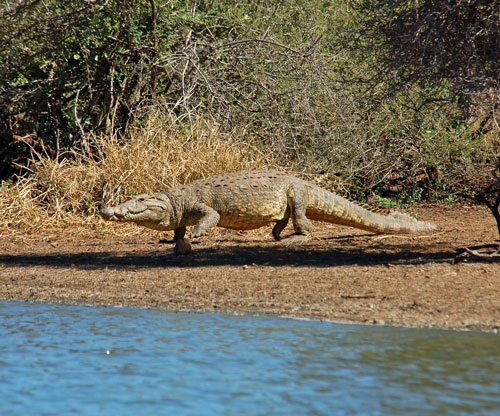 Differences in DNA confirm true status
But recent genetic analysis carried out in 2011 by a team including Dr. Evon Hekkala, assistant professor of biology at Fordham University, and Matt Shirley from the University of Florida, Gainesville has resulted in a major surprise. The results have revealed that lurking under the general description of Nile crocodile are indeed two distinct species.

Hekkala and her team analyzed DNA from eight ancient crocodile mummies from the same collections as the specimen corresponding to Saint-Hilaire's description of Crocodylus suchus, and samples from Nile crocodiles (Crocodylus niloticus) of today.

"Saint-Hilaire was very prescient in understanding the very detailed behavioral ecological differences between these two species," said Hekkala. "But the scientific community called him crazy and Crocodylus suchus was never recognized. We hope to change that with our research."

According to Hekkala: "This has shown that the habitat range of C. suchus has seriously declined since the turn of the century. Without proper recognition of this second cryptic species and proper management of it, we may lose it altogether."

Marlys Houck, geneticist with San Diego Zoo Global's Institute of Conservation Research added: "Even more remarkably, these species are not each other's closest relatives; one is more closely-related to New World crocodilians. The cryptic Crocodylus suchus is a unique entity worthy of a conservation strategy separate from the Nile crocodile populations of eastern and southern Africa."

A conservation problem
The Nile crocodile today is classified on the International Union for Conservation of Nature (IUCN) Red List as a species of "Least Concern." Thanks to the value of its skins, some governments therefore allow it to be hunted under sustainable use-based management policies and programs.

But with the discovery that two different species-not just one-are being hunted, Hekkala believes that any new conservation agreements allowing for sustainable harvesting of the Nile crocodile should be "re-evaluated." The researchers are calling for the new C. suchus lineage to be recognized, and for the IUCN to review its status. They emphasize that this species is not only an important historical icon but is now also thought to be critically endangered.