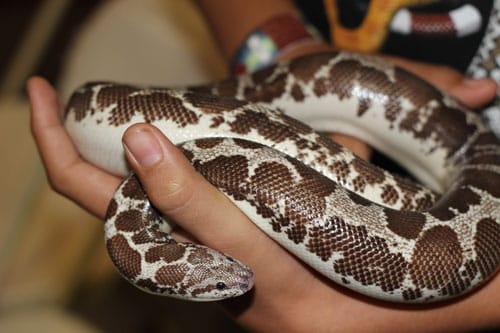 A Bevy Of Sand Boas

The Kenyan sand boa (Eryx colubrinus) is the most commonly kept and bred sand boa species. It is also the most readily available. However, it is not the only choice for sand boa enthusiasts. 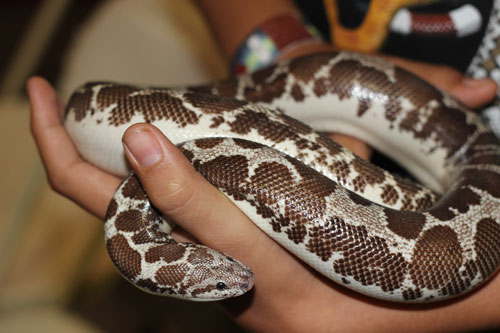 Rough-scaled sand boa (Eryx conicus): The second most common sand boa in North American collections, next to Kenyans. It is indigenous to India and Pakistan, and captive-bred babies are often available. Adults are known to become calm, like Kenyans, but babies and some wild-caught examples can be nippy. The first sand boa bite I ever received was from a young rough-scale. I was surprised at how hard it bit for its size! 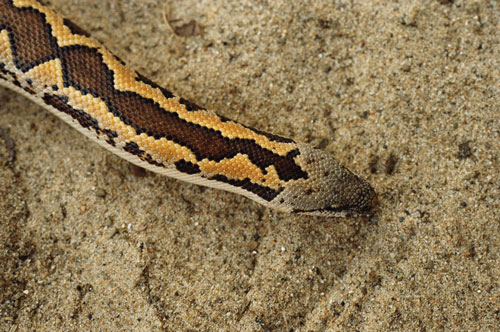 These boas should have a substrate that will allow them to burrow, as it is their nature to do so.

Smooth-scaled sand boa (Eryx johnii): Also known as the Indian sand boa, E Johnii is the largest sand boa, with adult females occasionally exceeding 4 feet!
This species is known for changing coloration as they mature. Babies start out orange with black bands, but they grow into and a more uniform brown snake, with some traces of juvenile pattern retaining on some specimens. The supply of captive-born smooth-scaled sand boas is still limited, but efforts are being made by breeders to increase the numbers. They are calm, attractive and willing to feed.

Tartar sand boa (Eryx tataricus): One of the largest of the genus, with females reaching almost 4 feet in length. The Tartar range is central Asia, but there seems to be some confusion with separate subspecies and range. As a result, some hobbyists with wild-caught Tartars don't always know which species or subspecies they actually have! It is also occasionally referred to as the Russian sand boa, as is Eryx miliaris. Tartars have been bred in captivity, but they are still not frequently available. Most specimens in collections are wild-caught.

Russian sand boa (Eryx miliaris): Also called the desert sand boa and Turkish sand boa (even though it does not occur in Turkey!). It is found primarily in the deserts of central Asia. This is one of the smallest species of sand boa, with females rarely exceeding 2 feet in length. They are becoming more common in collections, and some captive breeding in North America has taken place.

Saharan sand boa (Eryx muelleri): Also called the West African sand boa, this is an egg laying species! It is also called a Mueller's sand boa, and it looks remarkably similar to the more common Kenyan. It has a hook on the end of its tail, which the Kenyan does not have.