Ctenotus ora is about two inches long and lives in sand dunes.

A new species of skink has been discovered in Australia that scientists say may become extinct fairly quickly, due to factors such as urban sprawl and habitat destruction. According to a news release from Australian National University, the 2-inch long Ctenotus ora, or coastal plains skink can only be found in sand dunes south of Perth, along the Swan Coastal Plain. The skink is smaller than C. lancelini and has darker colorations and lacks vertebral stripes of its cousin. In addition, it features a white dorso lateral line and has a smooth copper-brown dorsum. 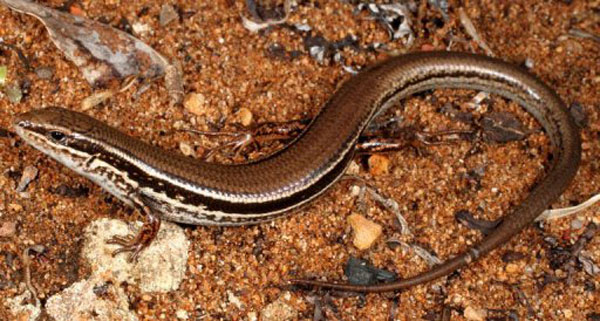 The coastal plains skink (Ctenotus ora) can be found in the sand dunes near Perth, Australia.

It was discovered by ANU ecologist Geoffrey Kay and Prof. Scott Keogh of the school's Research School of Biology. The scientists, who consider Ctenotus ora a habitat specialist,  were conducting research on the biological diversity of south western Australia when they made the discovery.

According to the scientists, the stretch of sand dune where the skink was discovered is currently under assault by developers who are building residential dwellings to accommodate the population growth of Perth and other areas. They recommend the skink be considered for immediate consideration for conservation attention.