Dakotaraptor steini was a massive 16 feet in length.

Imagine a raptor that is not about the size of a dog but rather a length of more than 16 feet with a killing claw that was 7.5 inches in length. That is how big this new species of Dromaeosaur was when it was an eminent predator in what is now South Dakota.

Dakotaraptor steini, was a beast of a raptor that lived during the late Cretaceous period. It sported quill knobs on the ulna, giving the scientists who discovered it pause. They speculate that the wings on this beast were not strong enough to give it flight capabilities, but think that Dakotaraptor steini used its wings to stabilize itself while it subdued its prey. 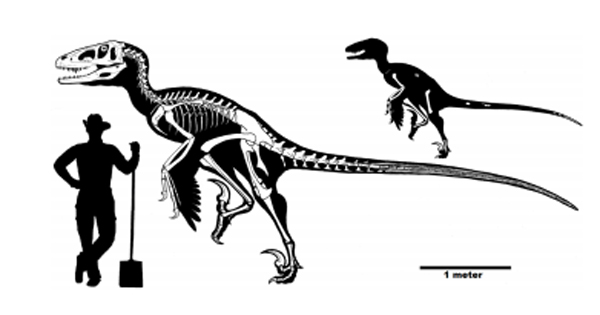 Skeletal reconstruction of Dakotaraptor holotype based on available material for Utahraptor, Dromaeosaurus, Deinonychus, and Achillobator, demonstrating overall proportions and the large size of the creature. Preserved elements shown in insert.

The scientists who contributed to the paper on this species include Robert A. DePalma, David A. Burnham, Larry D. Martin, Peter L. Larson, and Robert T. Bakker. The complete paper describing this species can be read on the University of Kansas website.