A new species of bush viper was discovered last year in Tanzania by the Wildlife Conservation Society and the Museo delle Scienze of Trento, according to the WCS website, atherismatildae.org, which is devoted to providing information on this new species. The venomous snake, called Matilda’s horned viper (Atheris matildae) is similar to the Usambara bush viper (Atheris ceratophora) but is larger and has different scalation properties. It is apparently relegated to the southwest of Tanzania's montane forest area. The exact location is secret. It feeds on forest frogs, lizards, and small rodents, Tim Davenport, director of the WCS in Tanzania and a member of the three-person group that discovered the snake told ReptileChannel. He also said that the snake's venom has not yet been investigated. 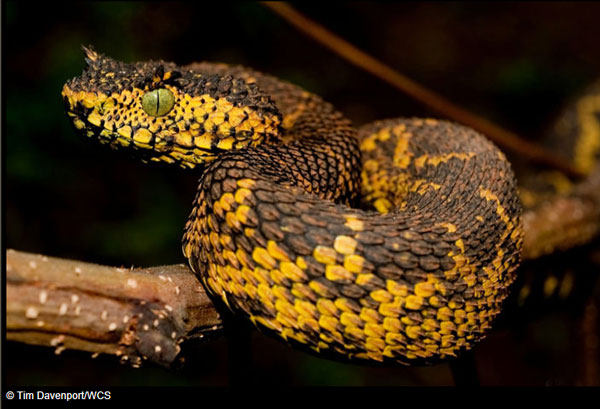 The Matilda hornded viper of Tanzania

The WCS has also started a captive breeding program in Tanzania with 12 snakes in an effort to ensure the reptile's survival in the wild. The program will provide for free the first few dozen offspring from the program to seed the market with captive bred specimens of the new species in an effort to discourage collection of wild caught vipers. The scientists are hoping that this will also raise awareness and build support for a community-based forest conservation program that will ensure the species as well as its environment can thrive in its natural state.