Feds claim the shoes were made with dog-faced water snakes, an endangered species.

Two years ago the Department of the Interior and the U.S. Fish and Wildlife Service seized a shipment of 300 pairs of Manolo Blahnik shoes at John F. Kennedy International Airport in New York City. The shoes were made with the skin of the dog-faced water snake (Cerberus rynchops), a species of snake that apparently has been on the endangered species list since 1973. 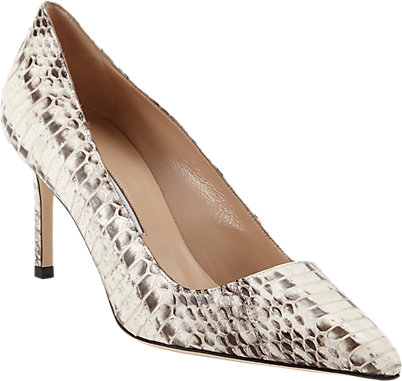 These Manolo Blahnik snakeskin shoes (Species unknown) will set you back only $935.

Courthouse News Service reports that the shoes entered the United States via Italy, but the skins of the snake were sent to Hong Kong from China, and then to Italy. The government seized the shipment of shoes because the bill of lading didn’t specify the production location of the shoes or what type of animal skins were used in the construction of the shoes.  The dog-faced water snake is not known to live in China.

The report doesn’t state why the government wants to keep the shoes, but speculation is that it doesn’t want the shoes to end up on peoples feet. What is bewildering is the snake is not listed as an endangered species by the IUCN, rather it is listed as a species of least concern.

The dog-faced water snake is found in mudflats, streams, ponds, tide pools, and other coastal waterways of Asia and Australia. It is a rear fanged, mildly venomous colubrid that in addition to being aquatic, is nocturnal. It feeds on fish and eels.

Reptile skins are widely used in the fashion industry, and especially for shoes. There is no real tracking system in place to verify the origin of these skins. In 2013, representatives of the Gucci fashion house attended the 16th meeting of the CITES Conference of the Parties in Thailand in an effort to garner support for a monitoring system for python skins. At the time, the company was concerned that illegally sourced python skins were making their way to the market and end up being sold to customers in the form of high dollar shoes and bags. A pair of Manolo Blahnik shoes can cost thousands of dollars. They start at around $500 and go up from there.