A Mexican beaded lizard (Heloderma horridum) that was found in a yard in San Diego, CA last week has been sent to the San Diego Zoo. The venomous lizard was initially thought to be a Gila monster after the people who found it did a google search on the lizard and thought it resembled a Gila monster. A herp expert from the San Diego Zoo determined the lizard was a Mexican beaded lizard and the zoo agreed to take the reptile and house it, most likely at the zoo's herp exhibits. The lizard, native to Mexico, is about 2 feet long, and San Diego county officials speculate the lizard was at one point someone's pet, though venomous reptiles are illegal to keep as pets in San Diego county. 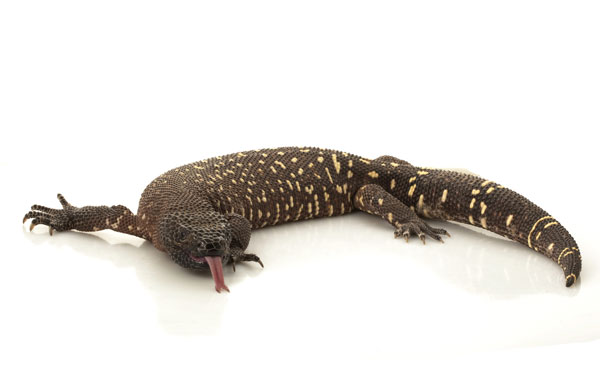 The Mexican beaded lizard grows to about 2 1/2 feet with some growing up to four feet in length. It is native to the West coast of Mexico from southern Sonora to an isolated population found in central Guatemala. While the lizard can be seemingly tame they are capable of administering a lightning fast and powerful bite. They are active when temperatures reach the 80s and eat a variety of food, including rodents, other lizards, snakes, bird eggs as well as young chicks. It is a relative of the Gila monster, which is found in the deserts and foothills of mountains of Arizona, Nevada, New Mexico, Utah, and Mexico.