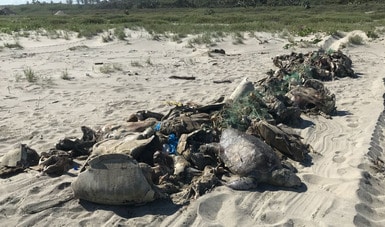 The dead sea turtles were brought to shore and buried.

A report from residents of the coastal town of Oaxaca led Mexican investigators to the grisly find of more than 300 dead and decomposing olive ridley sea turtles (Lepidochelys olivacea) entangled in an illegal fishing net.

Mexico’s Federal Attorney for Environmental Protection (PROFEPA) are working with the the Mexican Navy, the Mexican Turtle Center, the Universidad del Mar, local fishermen and government officials with the Municipality of Santa María Colotepec to investigate the crime.

According to a press release put out by the Federal Attorney for Environmental Protection, the turtles had been dead for more than a week, and drowned after getting caught in the net, which is illegal to use under Mexican law.

The turtles were collected from the ocean and buried on the shoreline.

The country’s National Commission of Aquaculture and Fishing CONAPESCA will work to inform local fishermen regarding the risks that illegal nets pose. 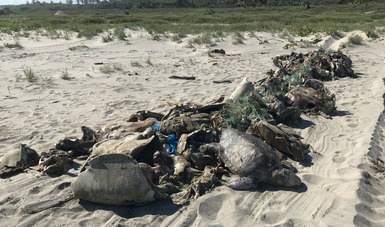 The dead sea turtles were brought to shore and buried.

Olive ridley sea turtles nest on a few select beaches around the world, according to the World Wildlife Fund. A single disturbance can have negative repercussions for the entire population. The 300 dead sea turtles will most likely negatively impact the population as well.