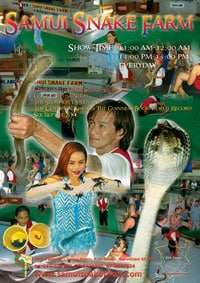 Last week I mentioned how it would be great if public vivariums existed that were on par with the hugely popular public aquariums many cities endorse these days. In response, Louis in Casper, Wyo., mentioned Reptile Gardens in South Dakota. Reptile Gardens has been featured in a past issue or two of REPTILES magazine, and it is indeed recommended to anyone who wants to visit a good reptile zoo. Speaking of Reptile Gardens, the place recently got a shout-out on the HBO series, Big Love. At one point during a stop on their cross-country trek, Bill Paxton suggests to one of his wives (the show is about polygamists in Utah) that she take the kids to Reptile Gardens.

Another show recently featured a reptile zoo of a different sort. The Amazing Race website includes the Elimination Station, which is a house where the contestants who get kicked off the race each week are sequestered until the race is over. There are short videos on CBS’ website featuring the people holed up there. This season the Elimination Station is located in Thailand, and one recent video segment showed the booted-off racers going into town to visit the Samui Snake Farm. The snake farm’s shows and advertisements definitely border on the sensationalistic, touting the venomous animals that are handled by people with their bare hands. The poster gives a good idea of what visitors are in for. The booted-off Amazing Race-rs looked at snakes in enclosures and attended a performance during which a handler (performer?) kissed a cobra on the top of its head. The snake was later held up close enough to the spectators watching the show to elicit a moderately startled response.

Back here in the U.S., in addition to Reptile Gardens, there are some other places that maintain impressive reptile collections. I’ll mention a few here, but because I don’t have the space here to go into a lot of detail about all of them, I would recommend that you read the article “Fun Reptile Vacations,” conveniently located right here on ReptileChannel. Written by Clay Jackson, a past managing editor on REPTILES, the article provides details on 40 different places to which you can travel to satisfy your urge for reptile viewing.

Clyde Peeling’s Reptiland is located in Allenwood, Pa. Peeling is a longtime reptile expert and Reptiland is one of the few herp-specialized facilities accredited by the AZA (Association of Zoos and Aquariums). In addition to the permanent educational exhibits and reptiles and amphibians on view at Reptiland’s permanent home in Allenwood, Peeling has a side business in Peeling Productions, which specializes in creating traveling exhibits. To date there are two with reptiles as their star attractions, and one featuring amphibians. These are Frogs: A Chorus in Colors, Geckos: Tails to Toepads, and Reptiles: The Beautiful and the Deadly. These “traveling zoological exhibitions” always feature live animals, and have made the rounds of museums, zoos and other locations across the country, where they have been met with much acclaim. But it all started with Reptiland, so consider paying the place a visit if you’re ever in the vicinity.

If you’re in the Great White North, the Indian River Reptile Zoo is worth a stop. Accredited by the Canadian Association of Zoos and Aquariums (the only reptile facility in Canada that has been), the zoo is located in Petersborough, Ontario, Canada. The 2007 meeting of the International Herpetological Symposium, held in Toronto, was hosted in part by the Indian River Reptile Zoo, and its curator, Bry Loyst, was the IHS program coordinator that year. He did an excellent job in lining up top-notch reptile experts as speakers. A highlight of the meeting that year was when we all trekked out to Petersborough to go to the reptile zoo. We IHS attendees had a great time, and I’m sure you would too. I remember, among the snakes we observed, seeing a pair of western diamondback rattlers engaged in mating behavior.

Returning again to the United States, there are a number of popular reptile attractions in Florida. Here I’m talking about alligator farms. Two of the more popular are Gatorland in Orlando and St. Augustine Alligator Farm Zoological Park in – you guessed it – St. Augustine. I remember visiting St. Augustine years ago when REPTILES was only a few years old. At the time Gomek was still the star attraction at St. Augustine. Now deceased, Gomek was a gigantic saltwater crocodile that was over 17 feet long and weighed nearly a ton. I’ll never forget the first time I laid eyes on him; he was a mind-boggling sight and it was a little difficult to comprehend how big that croc was.

When we arrived, a feeding show was about to take place, a common event at many gator attractions; often raw chickens are suspended over gator-infested water so the gators leap out to snatch the food. During Gomek’s feeding show, a skinned nutria would be offered on the end of a feeding pole. (Check out the video here.) I and then-REPTILES-editor Phil Samuelson were asked if we’d like to go inside Gomek’s enclosure during the feeding. We jumped at the chance and after signing a variety of legal documents in regard to various liability issues, we were ushered into Gomek’s domain.

Gomek was out of sight in the water. There was a pool, with a grassy lawn around the front edge of the water, and a Plexiglas wall around that. On the other side of the wall were benches where observers could sit and watch the huge croc lunging up for his nutria. Phil and I were a safe distance over to the left side of the enclosure, waiting for Gomek to emerge from the water. We were both squatting down, and I remember when Gomek did surface, he pointed his snout, ever so subtly, in our direction. It was for probably just for a nanosecond, but I’ll tell you, both of us immediately stood up straight from our original squatting positions. I also quickly formulated a plan in which, should Gomek start heading our way, I would subdue Phil, scramble up onto his shoulders or back, and catapult myself over the wall into the people sitting on the benches. I figured they would cushion my fall.

But Gomek didn’t care about us. His keeper was there with his nutria meal (and in case you don’t know, a nutria is a large rodent), and he lunged impressively at that instead. He sure was a sight leaping out of that water. Sadly, Gomek passed away in March 1997. His heart gave out, reportedly due to his huge weight. Imagine…a ton of croc! That day remains one of my vivid memories during my days so far on REPTILES magazine.

Read Clay’s article to find out about some of the other places you can go to look at reptile collections. There’s some cool stuff out there waiting for you.