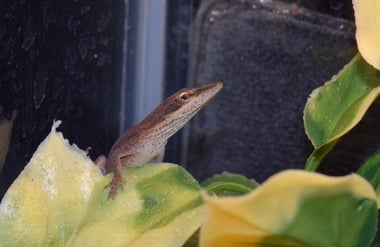 Consider this green anole (Anolis carolinensis) extremely lucky. After having seemingly escaped a lot of odds, from being picked in the fields to being washed, and then escaping almost certain death in a refrigerator, a 3-inch green anole popped out of some organic tatsoi and was saved by a school science teacher.

According to NJ.com, Sally Mabon bought the organic tatsoi at the Whole Earth Center in Princeton, a 100 percent organic produce center. As she unpacked the tatsoi, the lizard popped out. Mabon’s daughter brought the lizard to school where the science teacher, Mark Eastburn, set the lizard up with an enclosure.

"Interesting things can happen when you're working as a science teacher," Eastburn told NJ.com. "We set up a little cage for it. It really came back amazingly well." The student’s named the anole Green Fruit Loop.

The produce manager at Whole Earth Center, Mark Atkinson said that the lizard surviving is a testament to organic food.

"I don't think the lizard would've made it in a conventional, non-organic box," he told NJ.com. "It might normally surprise or freak out conventional shoppers, but the majority of organic shoppers realize that produce is grown on a farm and there's lots of bugs and animals that live on a farm too. It shouldn't be a surprise that one here and there makes it to the produce shelf."

Green anoles are native to the Southeastern United States and are found in abundance in Florida and much of the south. They are an introduced species in much of the world, including, Hawaii, the Ogasawara Islands in Japan and have also become established in San Diego, Calif.