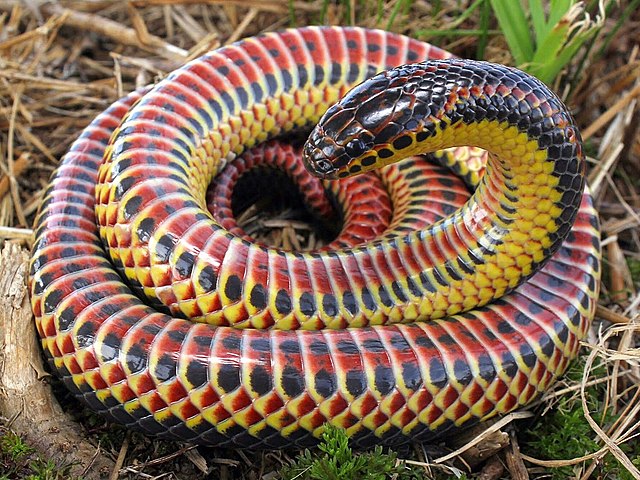 The non-venomous colubrid is also known as the eel moccasin.

The Florida Fish and Wildlife Research Institute is reporting the first documented sighting of a rainbow snake (Farancia erytrogramma) in the Ocala National Forest. It is apparently the first such sighting of the elusive species since 1969.

The institute wrote on its Facebook page that the Florida Museum of Natural History confirmed that the sighting is the first in Marion County, FL since 1969.

“Our biologists speculate the recent drawdown of Rodman Reservoir had this rainbow snake on the move,” the institute wrote on Facebook.

The rainbow snake, also known as the eel moccasin, is a non-venomous colubrid snake that is primarily aquatic and feeds on eels, frogs, tadpoles and other amphibians. In addition to being a strong swimmer, the reptile is a proficient burrower as well. It grows to about 36-48 inches (91–122 cm) in length, with larger specimens reaching up to 66 inches (168 cm). They are said to inhabit tidal mud flats, creeks, lakes and marshes.

A subspecies, the south Florida rainbow snake (Farancia erytrogramma seminola), was declared extinct in 2011. That population lived in the Lake Okeechobee region in southern Florida before it disappeared.