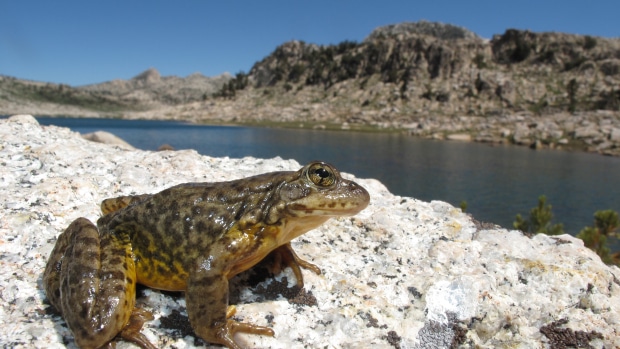 The Sierra Nevada yellow-legged frog was declared an endangered species in 2014.

University of California, at Santa Barbara ecologist Roland Knapp is working with the National Park Service, U.S. Geological Survey, and the U.S. Fish and Wildlife Service to translocate Sierra Nevada yellow-legged frogs (Rana sierrae), 20 at a time, from sites where they are thriving to locations where they once thrived but had been devastated by Batrachochytrium dendrobatidis, or Bd, the fungus that causes chytridiomycosis, or chytrid. 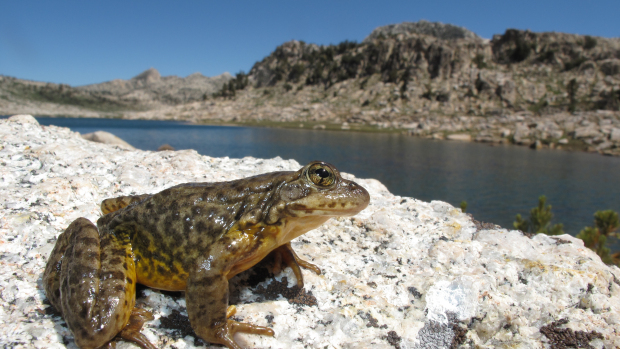 The Sierra Nevada yellow-legged frog was declared an endangered species in 2014.

The translocations are an effort to help preserve the species following the populations losses caused by chytrid, according to press release detailing the translocations.

Restoration Of Yellow-Legged Frog In Yosemite Could Take 10 Years

"Sierra Nevada yellow-legged frogs were devastated by Bd following its spread across these mountains," said Knapp, a research scientist based at the UCSB-managed Sierra Nevada Aquatic Research Laboratory in Mammoth Lakes. "But a few populations survived and appear to be evolving some degree of resistance to this pathogen, allowing them to recover despite the ongoing presence of Bd. Using frogs from those recovering populations to reestablish populations that were previously eliminated by Bd — that hasn't been done much before. It's good news for frogs for sure."

The initial translocation with this species occurred more than 10 years ago, and the researchers have been following these frogs ever since, gathering important data on how translocated frogs adapt to the new environments in which they were placed. The data enables the researchers to track their health and survival and figure out if the translocated populations are growing or shrinking. They are also measuring infection load with regard to Bd and how the disease and climate influences the survival of the new populations.

"What we really want to know is how infection load — a measure of how infected a frog is — changes over time, and we need to keep track for every individual in the population," Joseph said in a statement. "But we don't know exactly how many individuals there are in the population and we don't observe them all at every visit. So we decided, let's model the data that we wish we had for every individual and use the data from the subset of individuals that we caught to inform that model.

"For disease ecology as a field, being able to focus at the level of individual animals in wild populations is definitely a frontier," Joseph said. "We haven't had the necessary computational tools to do that until recently. With today's computational resources, we can better understand how differences among individuals affect the fate of populations — do they persist or do they go extinct?"

So far, one group of frogs are surviving and reproducing successfully while another group appears to be disappearing from the site in which they were translocated, the result of the lingering effects of Bd.

Knapp though is optimistic.

“Despite still having major effects on frog populations, disease is unlikely to doom this iconic species in Yosemite National Park," Knapp said. "Since the early translocations described in this paper, many additional translocations have been conducted in Yosemite and the majority of those populations show signs of becoming established.”

"Translocations are a viable conservation measure to re-establish populations of frogs that have been wiped out by Bd, assuming that large donor populations are available.