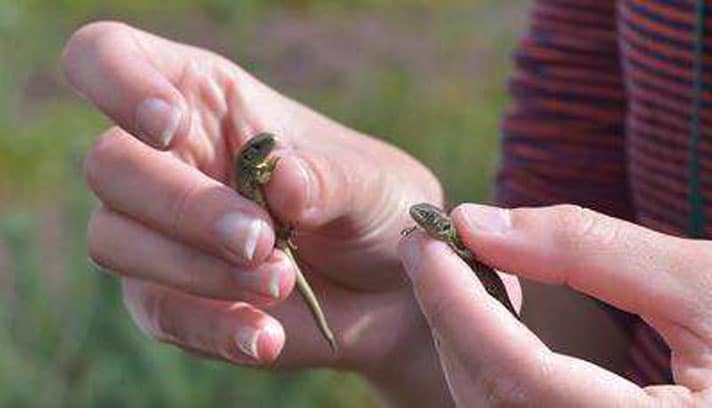 The sand lizard has experienced declines in England and Wales but is doing well in other parts of Europe and Asia.

The sand lizard (Lacerta agilis) population in the United Kingdom just got bigger thanks to the release of 80 juvenile sand lizards into the Eelmoor Marsh Site of Special Scientific Interest, a 79 hectare area set aside for wildlife.

The release is the first stage of a three-year release effort to bolster the populations of the lizard in England and Wales, where unlike other areas in Europe and Asia, the reptile has seen large declines over the years. The goal is to restore the reptiles to their natural habitat and historic range.

"As part of the close monitoring of the lizards after the release we hope to radio tag a portion of the population next year, in order to follow individuals more closely," Rachel Gardner, Marwell Wildlife and University of Southampton Ph.D researcher told the University of Southhampton news. "In total we intend for 240 individuals to be released during this reintroduction programme to establish a self-sustaining population at the site indefinitely."

Researchers hope to gain valuable insight into this species, which much is still not known.

“This is a rare opportunity to monitor this cryptic species after their release, to try to understand its habitat requirements and ability to survive,” Marwell Conservation Biologist Dr. Martin Wilkie said. “It will also be a chance to answer other fundamental questions around their ecology on a site that we are directly managing, which is very difficult elsewhere.”

Some had thought the sand lizard in the United Kingdom went extinct 60 years ago. The reptile is listed as threatened in the UK and is protected under UK law. It has experienced declines in part due to habitat loss, agricultural expansion and building developments. Hopefully with the release of these 80 captive-bred specimens, the wild populations can be further bolstered with successful breeding.