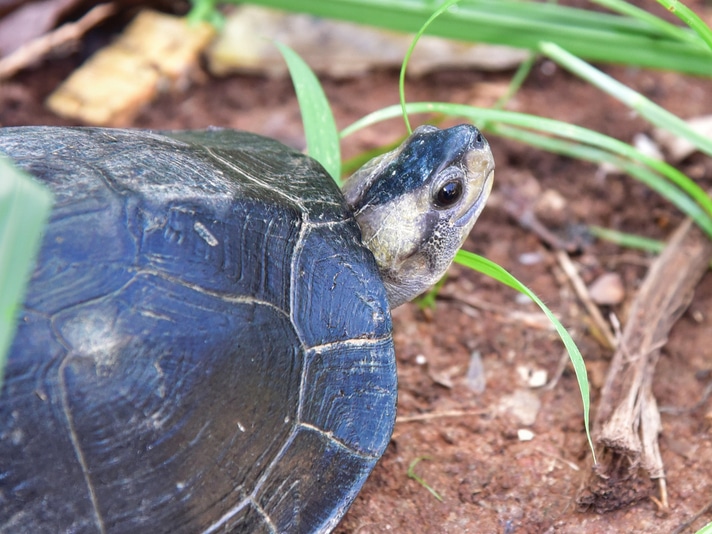 The Indian flapshell turtle is listed by the IUCN as a species of least concern.

On November 15, 2018, more than 1500 Indian flapshell turtles (Lissemys punctata) were confiscated by authorities in Uttar Pradesh, India. In a group effort with private and federal organizations, poachers were arrested in connection to this wildlife crime.

TSA to the Rescue! TSA India @turtlesurvivalindia conservationist Rishika Dubla reports that over 1500 Indian Flapshell Turtles (Lissemys punctata) were seized this morning near Lucknow, Uttar Pradesh, through a joint operation between the Uttar Pradesh Special Task Force (Police Department) and Uttar Pradesh Forest and Wildlife Department. A truck was intercepted by the team where the animals, apparently taken from a wetland complex of Etawa and Mainpuri, had been stuffed into 43 burlap gunny sacks. Two men were apprehended in the seizure and the animals were transported to the Kukrail Gharial and Turtle Rehabilitation Centre. Our TSA India team assisted with the primary handling and veterinary triage at the center, where the cohort will be evaluated with closer detail, and given appropriate medical treatment and proper care in the coming days. To support the TSA's mission of "Zero Turtle Extinctions" Click the link in our bio. #rescue #tsaindia #turtlesurvival #turtles #flapshell #savetheturtles #teamwork #conservation

The Turtle Survival Alliance, which is dedicated to worldwide turtle and tortoise preservation, stepped in right away. The TSA wrote on its Instagram page that the Kukrail Gharial and Turtle Rehabilitation Centre is helping to rehabilitate, inspect, and treat these confiscated specimens. On the night of November 15, 2018, organized efforts intercepted a van full of 43 bags stuffed with Indian flapshell turtles that were poached from the wetlands of Etawa and Mainpuri in India. The species lives along a “variety of aquatic habitats, ranging from rivers and streams to reservoirs, marshes, ponds, lakes, and even salt marshes, rice fields, gutters, and canals in metropolitan areas.”

They are a resilient species, being able to survive drought with estivation in the mud for an extended amount of time. They are omnivorous and adaptable to many habitats, but like all turtle and tortoise species, they are helpless against the illegal wildlife trade.

The Indian flapshell turtle is a small and unique freshwater turtle species native to Southern Asia and surrounding countries. Little to no research has been done on their behaviors and population, and they are currently listed as least concern by the IUCN.