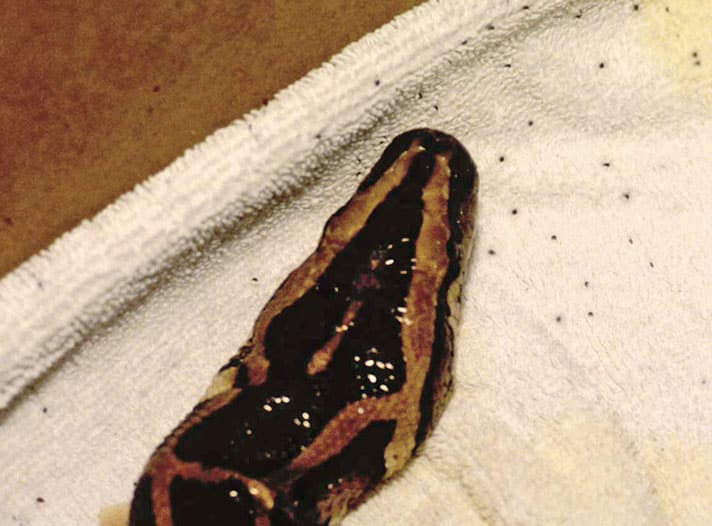 Mites can be both a nuisance and a costly problem in any reptile collection.

In the first issue of REPTILES magazine, I wrote an article on mites and ticks. I mentioned several suggestions for treating these ectoparasites. A young reader over interpreted one suggestion, and using the old adage that if a little is good, a lot is better, he killed his pet lizard. This was a sad situation. To make things worse, his father, an attorney, tried to sue me. Fortunately, he did not win. But he did bring it to the forefront that his son was not the brightest kid on the block. 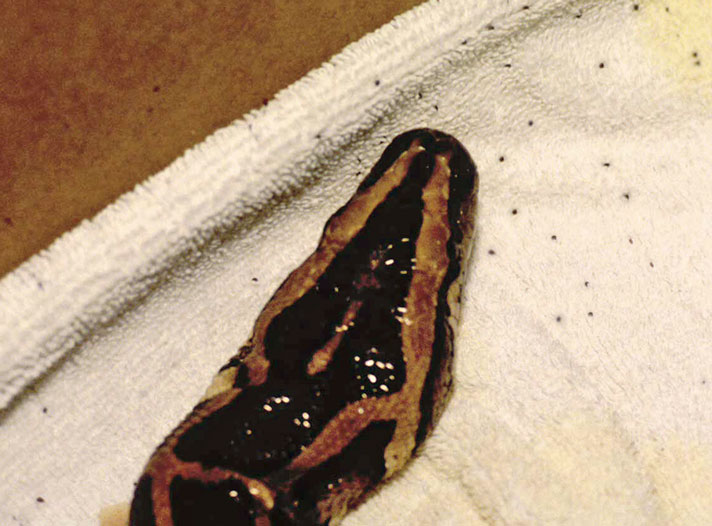 This Burmese python was covered with so many snake mites that the mites were leaving the host and invading the cage.

Mites can be both a nuisance and a costly problem in any reptile collection. Once the ectoparasites have been identified, they can be treated, but it can be a challenge.

There are more than 250 different species of mites that parasitize reptiles. The three most commonly encountered are the snake mite (Ophionyssus natricis), the lizard mite (Hirstiella trombidiiformis) and the chigger mite (also known as grain mites, in the family Trombiculidae). Most adult mites are hematophagous, meaning that they suck blood, but the chigger mite is only parasitic in its larval form.

Acariasis is the term for an infestation with mites (and ticks), and is commonly associated with unsanitary cage conditions, poor husbandry practices, and recent imports or acquisitions. Mites commonly enter a collection arriving on newly acquired animals that have not been quarantined properly. Once established in a cage, mites quickly spread to other animals.

It should be pointed out that mites are found in both captive and wild populations. However, in captivity, where the parasites are confined to a limited space, their concentrations increase dramatically. In the wild, the parasites will disperse, thus the host is not so heavily affected.

Mites are capable of causing serious problems in captive reptiles. Heavy infestations of mites can consume a large enough quantity of blood from their reptilian host to cause a potentially life-threatening anemia.

The snake mite has been implicated as a vector for various infectious disease-causing agents in reptiles, such as Aeromonas hydrophila, Leucocytozoon and certain hematozoa. Aeromonas hydrophila is a bacteria commonly associated as a cause of pneumonia and infectious stomatitis, or mouth rot, in snakes. There has also been speculation that mites may be involved in the transmission of inclusion body disease of boid snakes.

Also worth noting, there has also been one report of the snake mite causing skin disease in humans.

Mite infestations are usually quite obvious. In the worst case scenario, the reptile will have mites visibly crawling all over the body. Mites vary in color, depending on the species and how recently it has taken a blood meal. The snake mite may be either black or tan, depending on the sex of the mite and its age. The lizard mite and the chigger are usually red to orange in color.

Mite-infested animals will usually have a dull, lackluster appearance. The mites tend to accumulate in areas of the reptile’s body that afford the most protection from the environment, including under the chin, or gular folds in snakes; the eardrums of lizards; under the scutes, the peri-ocular regions around the eyes and inside the skin folds around the cloaca.

Female mites lay eggs (up to 90 in number), off of the host, and in the cracks and crevices of the terrarium. This is why cleaning the infested animal’s environment is so important in mite control.

Treat animals severely debilitated from concurrent disease, or from a mite-related anemia with resulting weakness, first before attempting to treat the mites. If a snake is anemic and dehydrated from blood loss, it would be prudent to have a veterinarian administer fluids or perform a blood transfusion, if necessary, prior to treating the animal for mites. It is also a wise idea to start the animal on antibiotic therapy because mites can potentially carry many reptile diseases.

Mites and ticks can cause havoc in any reptile collection. The parasites are easily diagnosed and, with the right plan, can be exterminated. Given that some of the suggested treatments can be just as toxic to the patient as they can be to the pests, it is wise to get advice from someone with experience before trying to treat your animals by yourself the first time. And whatever you do, don’t sue your veterinarian if you don’t follow instructions.