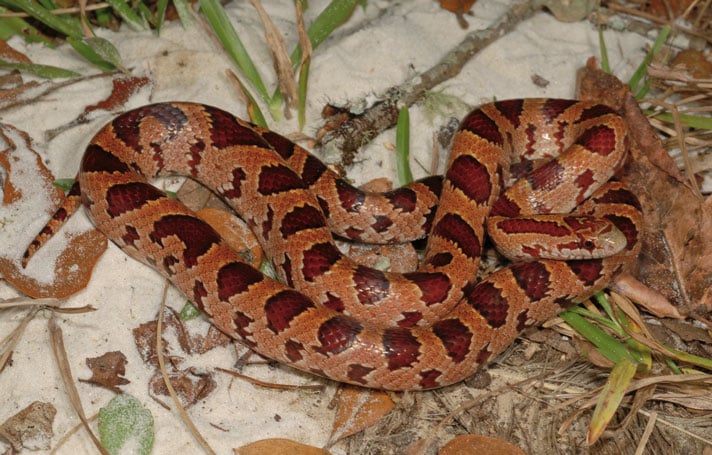 What Is The Rarest Color In Reptiles?
Herp Queries: Use Good Judgment With Children And Reptiles
Is The Blue-Tongue Skink An Ideal Lizard For Those New To Reptile Keeping?

Question: I found a snake that looks like a corn snake but isn’t. It’s almost 3 feet long. I caught it on a back road near my home at dusk. It looks like a corn snake, but it doesn’t have the arrow on the head, and it doesn’t look right in other ways, too. I hope you can tell by my cell phone picture what it is. It ate some baby mice for me already. I’m thinking of keeping it. 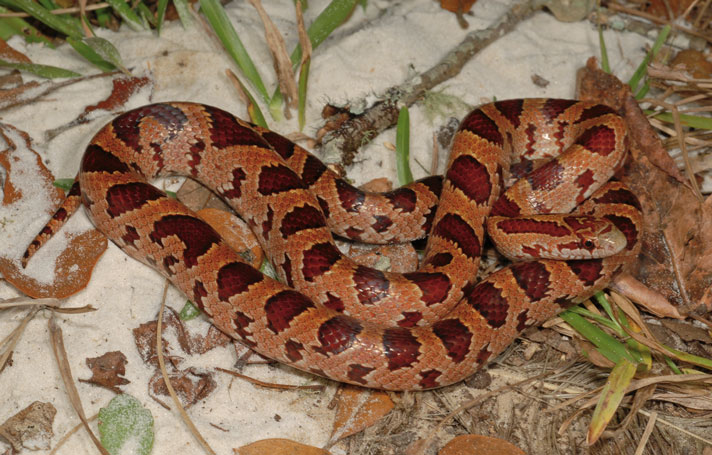 Answer: Your cell phone photo isn’t clear enough to publish, but I can barely identify the subject as a mole kingsnake (Lampropeltis calligaster rhombomaculata). It’s a largely fossorial species that spends a good deal of its time underground, just below the surface, and is presumably more common than it appears because of this habit. People seldom see them unless moving objects under which they are sheltering, or when plowing the earth for agriculture or construction. Mole kings also crawl about more frequently in morning and evening, and especially after heavy rains saturate their subterranean abodes.

How to Care for Mole and Prairie Kingsnakes

Mole kings can make satisfactory captives if allowed a deep cage substrate in which to burrow and hide. This means you’ll have to dig them out to see them very often. They’re shy and not very prone to biting. They usually feed well on baby rodents, but they may also accept other small animals like frogs and smaller snakes.

Bill Love photographs herps in nature, writes and lectures. He assists his wife, Kathy, with her business, CornUtopia, and via his company, Blue Chameleon Ventures, leads nature tours to view herps in Madagascar