A loggerhead sea turtle (Caretta caretta) that had its jaw and face damaged by a boat propeller has a new lease on life thanks to 3-D printing technology. The turtle, name AKUT3, was found lifeless on the surface of the Mediterranean Sea. It was taken to the Sea Turtle Research, Rescue and Rehabilitation Center at Pamukkale University (PAU). It was unable to eat on its own due to the severity of the damage to its face and jaw, so scientists began to get to work while workers at the center were able to force feed the turtle, nursing it back to health.

Tortoise That Lost Legs to Rat Bites Gets Wheels

The doctors at the center decided that a 3-D printed jaw would be the best hope for this turtle and turned to BTech Innovation, a Turkish 3-D printing specialist that specializes on 3-D printed devices such as implants, 3-D models and prosthetics. The company worked up a 3-D model after scanning the turtle’s head and jaw area and with close consolation with the veterinarians and the surgeons who would fit the new jaw, created a medical grade titanium prosthetic device for the turtle, free of charge. 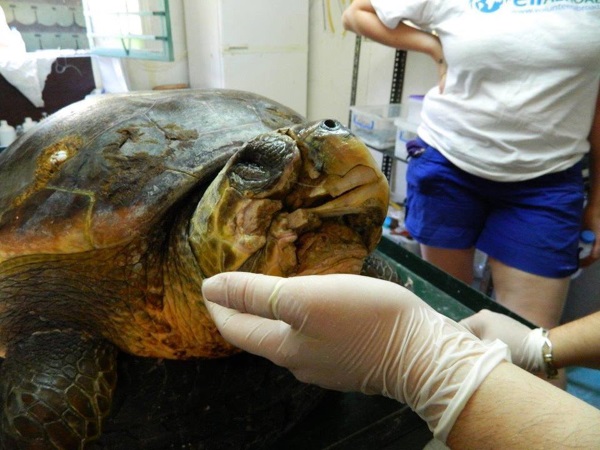 In all the design of the device took two months, using existing models designed for humans and customizing them for the turtle’s damaged jaw and face. The surgery was a success and the turtle will be released back into the wild when it is fully rehabilitated.

The loggerhead sea turtle can grow to about seven feet in length and reach a weight of approximately 300 lbs. The turtle's range includes the Atlantic and Pacific oceans, the Indian ocean and the Mediterranean Sea. The turtle reaches sexual maturity in as little as 17 (20 to 30 years is the norm) years and has an approximate lifespan of up to 67 years, though are known to live longer.  The loggerhead sea turtle feeds mainly on invertebrates, including sponges, shellfish, jellyfish, shrimp, squid, and sea urchins.