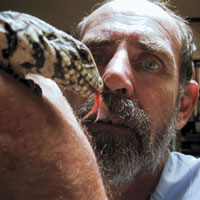 Reading Russ Gurley’s new book, Lizard Man: The Life and Adventures of Bert Langerwerf, feels just like Bert is talking to me. Sadly, Bert passed away on August 11, 2008, almost exactly a year ago as I write this. He dictated much of the text of the book to Russ from what would become his deathbed in the hospital.

I met Bert in 1994 in New Orleans, when I was there for that year’s International Herpetological Symposium. It was the year of several happy firsts: my first visit to New Orleans, my first IHS, the first time I saw leucistic alligators (at the Audubon Aquarium of the Americas; they look like they’re made of white chocolate and have blue eyes) and my first chat with Bert Langerwerf. I was with BowTie for just about a year, and REPTILES magazine had only published a few issues at that time. Original editor Phil Samuelson and I were still learning the ropes when we arrived in New Orleans, and I still vividly recall getting slammed by the humidity the minute I stepped off the plane into the gangway. I had felt high humidity before, but nothing like that. I think I’m still sweating from it.

We were soon mingling with a variety of reptile folk at the IHS, and in one conference room we introduced ourselves to Bert. He was immediately likable. Bert was very interested in the magazine because one of his primary goals in life was to share his vast reptile knowledge with other people, and he knew the magazine would provide him a terrific outlet with which to do so. Bert was well-known in the industry for his openness and willingness to share reptile husbandry and breeding information with others in an arena where not everyone is always as open. But Bert exuded warmth and approachability and quite simply loved to talk about reptiles, especially lizards.

That meeting in New Orleans led to a long-time association between Bert and REPTILES, much to the benefit of our readers. The first article Bert wrote for us was “Super Mealworms,” published in the October 1994 issue. He was the first person to breed Zophobas morio, otherwise known as the super mealworm, and it has since gone on to become a staple in the diets of many a reptile.

Bert’s articles didn’t stop at worms, though; far from it. He wrote about a lot of reptiles, and other Langerwerf-authored articles covered three species of basilisks, tegus (his last article for REPTILES was “Totally Tegus,” in the June 2008 issue), Chinese crocodile lizards and the Drakensberg crag lizard.

I e-mailed with Bert often, though only got to visit with him face-to-face about once a year, at the National Reptile Breeders Expo in Daytona. He was always there, manning the Agama International booth. He was always just as friendly and in his typical good spirits, even when I saw him for the last time at the 2007 show after he had already been dealing with illness for some time.

Gurley’s book is jam-packed with many of Bert stories. I’ve learned a lot myself. For one thing, I never knew that the shoe size Bert wore sometimes depended on whether or not he had clipped his toenails. Can you tell by this that Bert was willing to tell all? Of course, in addition to such off-the-wall factoids there are tons of stories about Bert’s herping adventures around the world; the creation of Agama International; the many reptile industry figures who were friends of Bert’s; his towering accomplishments in breeding lizards (he was especially known for his Australian water dragons); and his reptile research, including the discovery that temperature played a role in the sex determination of some lizards.

If you are interested in a real dose of authentic herp history as told by the man who lived it, you should get a copy of Lizard Man: The Life and Adventures of Bert Langerwerf.” Once you’ve read it I’m sure you’ll feel that you, too, knew Bert Langerwerf — and he was definitely a guy worth knowing.