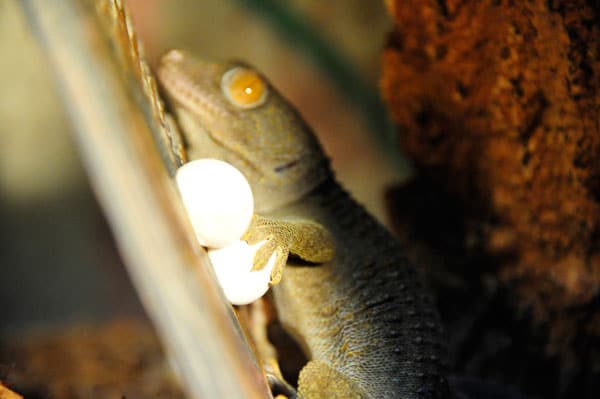 Tokay geckos (Gekko gecko) are fairly easy to breed.  Some captive Tokay will breed year round once they become acclimated to their new

Tokay geckos (Gekko gecko) are fairly easy to breed.  Some captive Tokay will breed year round once they become acclimated to their new home.  Others will follow the typical cycle of the seasons.

Breeding season starts in late October and runs through May.  This corresponds to the wet season in Indonesia.  I will add an extra misting during a local thunderstorm.  Tokay sense the barometer drop and the rain is a good breeding trigger.

The female will lay two eggs approximately one month after mating, if there is a good vertical nesting site available.  She can hold sperm if conditions are not acceptable. She will glue her eggs onto the vertical surface of bark, slate or other suitable areas within their nest.

A nest consists of the space between two solid vertical surfaces.  Usually an inch or two apart is perfect.  The top to bottom space in the hide or nesting area should be 18 inches to 24 inches in height to allow room for both parents and the egg clusters. 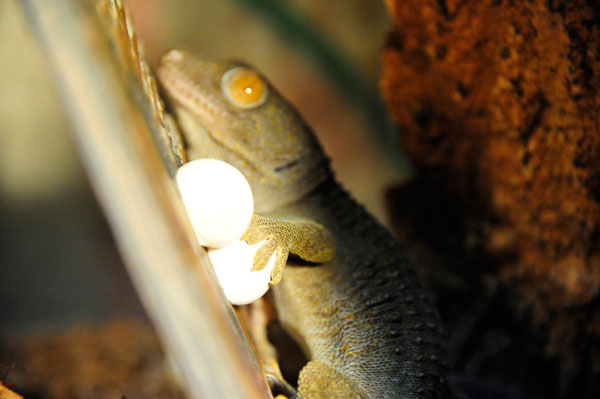 Do not try to remove the eggs from that surface.  Also, if you remove the slate or bark from the enclosure to incubate elsewhere, she will stop laying.  Actually if there is any disturbance in cage furniture the female will stop producing eggs, often until next season.

Tokay will brood their eggs if needed to regulate temperatures.  I leave the eggs to hatch in the enclosure.  The female Tokay will continue to lay another pair of eggs every 30 days or so after the first set for a total of 6 to 8 eggs.  She will lay them in the same place as the first pair.  If the male is not removed after the second or third set, she may continue laying eggs.  This can exhaust her mineral reserves and result in egg binding due to kidney failure.

So let’s dispel a well publicized notion that Tokay are prone to eat their own eggs.  This is not true.

Another unrelated female will eat the eggs that are not her own.  Females will eat infertile eggs as well or the shells of previously hatched Tokay, but not their own fertile eggs.

Female Tokay will compete for a male.  Keeping more than one unrelated female in with a male is never going to end well in the typical sized enclosure.  One female will continue to bite the back haunches of the other until she breaks her back, or she leaves.

Related females can be different.  I have observed sibling females using the same egg laying site simultaneously without incident in a very large enclosure area of 10’ x 12’ x 8’.   I still do not recommend this without sufficient space. 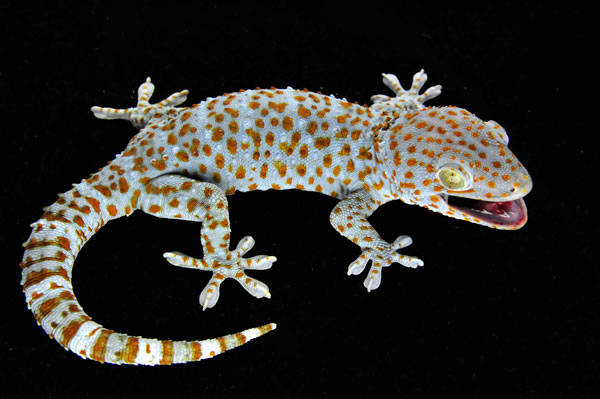 There is evidence that Tokay hatchlings benefit from ingesting feces from adults to establish their gastrointestinal track.  It has also been observed that young Tokay are able to take down and break up larger prey items.  Although providing appropriate sized insects is suggested, they still will tackle larger ones and pull them apart.

Both parents will protect their young.  If the enclosure is large enough and has the proper hiding places, males will not eat their own young.  Accidents in smaller enclosures during feeding time have been observed.

Now if the first set of eggs was really produced from retained sperm from a previous breeding to another male, the new male will sense this and eat these hatchling as they are not his.

Like some other geckos, Tokay pairs will bond.  It is not always possible to bounce your key male from one female to another.  He may be rejected by the subsequent females.  There is also evidence that siblings can recognize each other and may not breed without sufficient separation first.

All hatchlings should be removed within 60 days.  The adult male will start to nip at juvenile males long before you will be able to identify them as such.

Breeding females should be rested and allowed to refortify their mineral reserves before breeding them again.

Tokay can usually be visually sexed after about 6 to 8 months of age.  Males will develop
obvious waxy excretions from their femoral pores.  You can run your finger tip from the tail to the belly over the “V”.  Females will feel smooth and males will feel sticky.  Males will also display their hemipenes if gently coaxed.

Overbreeding past the nutritional limits is the number one cause of death in captive female Tokay.

Tokay egg shells require that they become firm or solid prior to the female pushing them down the oviduct.  If she is unable to calcify the eggs to a sufficient state of firmness, they will remain soft and gelatinous, causing a blockage, exhaustion and death if not surgically removed.

General causes for egg binding, (Dystocia), are malnutrition, weak muscles from lack of  exercise, injuries to the pelvis and improper temperature or humidity.  Specifically in Tokay, kidney failure has been the underlying  cause of death noted in necropsies.  Poor nutrition, lack of usable calcium and undersized organ development compared to total body size are all contributing factors.  Wild caught fresh imported Tokay tend to be undernourished.

Adult females from Indonesia are about 30 to 40 grams at best when they arrive.  They do not usually possess the needed stores of calcium and other minerals for immediate egg production.  Stress from not eating for weeks during collection and import does not help either.

As captives, they may put on a lot of extra weight, typically doubling in size.  One may see this as a healthy Tokay, but really the kidneys stopped growing some time ago and are only big enough to handle the 30 grams of the imported adult animal.  Now they have to try to work double time to support a 70 gram body.  The kicker is when egg production is added to this.  Those undersized kidneys may not be able to produce more than a couple sets of eggs before they fail.  I've seen females drop on their first set, or after their 6th set.  It's not always easy to predetermine what they are able to produce.

In captive bred Tokay, the female will basically stop growing the minute she starts egg production.  So whatever size she is when she starts breeding is the size she'll be for life.   She most likely will not grow much bigger if regularly bred.  This is particularly dangerous if she is too young or too small when first bred.  She can suffer from lack of stored reserves because her body was still putting energy into her own growth and maturity, and had not started reserves for egg production.  Or she may not have fully developed an adult-sized pelvis which will restrict egg passage.

Long term captive, sedentary, overweight female Tokay may not have the muscle strength required to push their eggs out and can pass from exhaustion.  Wild caught females may have pelvis damage from fighting with another female.  Female Tokay bite the lower back and haunches of an intruding female to protect their territory around a male.  This damage is rarely visible to the casual observer.

How to prevent an overweight Tokay Gecko

Other contributing factors to egg binding are oversized or joined eggs, no nesting options, incorrect temperatures, dehydration, stress, overcrowding or an enclosure that is too small.   Proper husbandry is essential.

Tokay Genetics and What We’ve Seen and Proven So Far

Multiple visual genetic mutations, (multi-gene) wild caught Tokay are not that uncommon.  The trick will be to work backwards to isolate each of the traits so we can understand what they do visually. 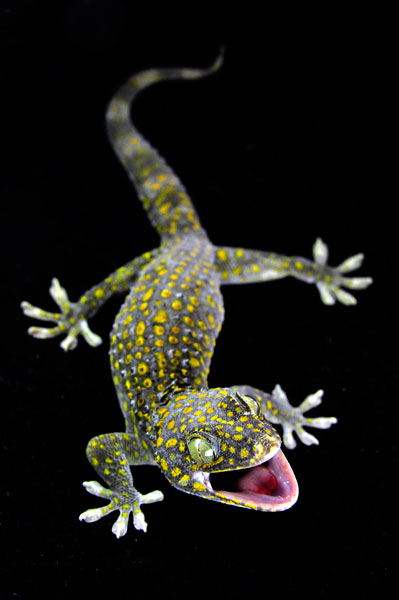 Blue Headed Greens have proven to be Co-dominant.  I’m still not sure if that is all of them, or just certain groups.  I’m also thinking that they might be a super form of sorts.  I’ve produced green based Tokay with dark green spots and blue dots out of Blue Headed Green breedings.  Line breeding these Aberrant Greens might be interesting.

The other patternless Tokay appear to all be simple recessive at this point.

The Super Reds that I have act co-dominant as well.  I bred an F-1 Super Red male to a Granite/pied female and produced a couple of Super Red offspring in the mix.  I’m assuming the are het for that females’ line of Pied as well.

The other observation is that some of these same-type recessive genetic traits, when paired together, do not produce a visual copy.  As an example, if you breed Granite to Granite you get all normal looking offspring.  The same goes for almost all of the white Tokay.

I’ve hypothesized that the genetic markers, or alleles for a certain visual phenotype are in a different location in each parents’ DNA strand therefore they do not line up to create the morph.  My guess is that the offspring are actually double-hets for the same trait.

To prove this, I’ve started line breeding these double-hets back to their visual parents.  This is starting to produce results.

I’ve line bred within a couple of Pied groups.  One produced an all white, Leucistic-like Tokay with black eyes.  She has sense started to show her color patches which makes her a progressive pied.

The progression from white to black, and black to white and several variations in between have been observed in most white Tokay.

The other pair of Pied, when line bred, produced a Blue Granite.  I can’t wait to see what line breeding the other wild caught Granite will produce.  Will we see more Granite, or Pied?

I could end up with a handful of different lines within the pied Tokay groups.  It will take years to out cross them to see what might be comparable.

The other breakthrough is with two different females and a male of what I’m calling a true Calico/Pied.  Their visual offspring has been either a copy of the large patches of yellow/gold, light and dark green and white with orange specks like their parents, or all of the colors speckled together to create a Molten look.  Again, I’d like to see if we breed the Molten, will we get the Calico patchwork at all, or is this a completely different genetic trait.

It should be obvious that we are just starting to unlock Tokay genetics, but we’ve only scratched the surface.  There is a huge backorder of projects yet to be proven out.