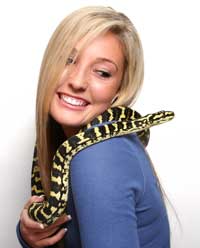 Move over guys, because women love reptiles, too!

For years, the reptilekeeping hobby was considered guy territory, with women peripherally interested, or at least tolerant of their guys’ involvement with all things cold-blooded. When I was a kid growing up, it was not unusual to see the image of a little boy holding a snake or lizard out to a little girl who was running away screaming, whether this was in cartoons, TV shows or, occasionally, real life. Personally, I don’t remember ever using a reptile or amphibian as a scare tactic, but I did witness such playground behavior once in a while. (TANGENT ALERT – Have you ever seen the show Scare Tactics? I must admit I derive sadistic glee from watching people get scared witless. The most hilarious Scare Tactics segment I’ve seen to date was the PETA activist who was confronted by the Rat Monster. You can see this clip, and many others from Scare Tactics, on YouTube – END OF TANGENT.)

Boys and herps were a natural together, pure Americana, with many of us badgering our mothers to please, please let us have a snake (or frog, or turtle, or lizard). I’m sure many mothers, especially those who were nervous around reptiles to begin with, regretted granting that permission when confronted by the escaped reptile of the week in the living room. Of course, there have been little girls who liked reptiles all along, but historically, reptiles were usually considered a guy thing.

Somewhere along the way, things changed. The next time you’re at a reptile expo, pay attention and you’ll notice just as many women wandering the aisles and enthusiastically examining the reptiles on display as there are men. And they’re not just in the aisles – you’ll see plenty of women vendors selling reptiles and amphibians, too. REPTILES magazine conducted a survey in April 2010, and we found that 66 percent of our readers were male and 34 percent were female. I don’t have any official numbers for the reptile industry as a whole, but I would guess that the number of women keeping reptiles is slowly catching up to the number of men. I feel safe in saying that male hobbyists still outnumber the females, but I wouldn’t be surprised if the gap is closing.

You’ll find women involved in every aspect of the reptile world, including scientific research, retail and wholesale sales, conservation, education, manufacturing, zoos and museums, expos – everything. I can mention many that come to mind, but I would inevitably leave somebody off, so I’m not going to go down that road. It would take a long time to tally up all the women who are enmeshed in this industry. When gauging interest in the animals on the enthusiast level, you can simply examine activity here on ReptileChannel. There’s no shortage of female Club Reptile members, and you’ll often see comments from people of the female persuasion right here on my blog pages. I’m active on the REPTILES Facebook page, too, and women and girls post on there all the time.

Of course, the “women in reptiles” trend is reflected in my own REPTILES magazine editorial staff, with Managing Editor Stephanie Starr and Associate Editor Carrie Brenner. Plus there’s the magazine’s National Sales Manager, Sandy Quinn. Hey, I’m outnumbered! And many women have written articles for REPTILES over the years.

Right now, the women and reptiles theme is being promoted to help a conservation effort for coqui frogs. With a variety of collaborators, Jen Stabile, an amphibian keeper at the Central Florida Zoo and Botanical Gardens, organized the production of the Florida Girls of Herpetology 2011 calendar. Jen also appears in the calendar, as the model for November. The calendar features, in the words of photographer Bill Love, “herp babes” posed with an assortment of reptiles and amphibians, from Komodo monitors and eastern indigo snakes to gaboon vipers and Chinese alligators. Biographies of all 12 models are provided, and their reptile-related credentials are very impressive. For example, Denisse Abreu, the model for January, is the assistant director of Medtoxin Venom Laboratories and the Reptile Discovery Center, and she maintains a collection of more than 800 venomous snakes. February model Jennifer Evans is a Florida Fish and Wildlife-authorized gopher tortoise agent. March’s Candace Donato works at the St. Augustine Alligator Farm and is involved with various conservation efforts, and September model Tara Dodson is president of Keepers of the Coast, an organization committed to the conservation of sea turtles.

Sales from the calendar will provide financial support to aid in the construction of a Central Florida Zoo and Botanical Gardens amphibian conservation facility for Puerto Rican coqui frogs (Eleutherodactylus spp.) as part of the Coqui Conservation Initiative (CCI). According to Jen Stabile, of the 17 species of coqui, three are extinct and 11 are either threatened or endangered. You can buy the calendar from various outlets, including Amazon.com, or by going here. It’s for a good cause!