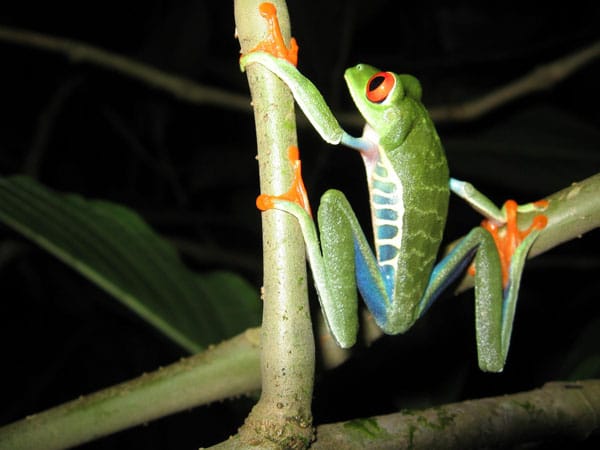 Nestled in the heart of the Caribbean lowlands of Costa Rica, in the welcoming, sparsely inhabited community of Chilamate, the Selva Verde Lodge & Rainforest Reserve (SVL) is built along the banks of the Sarapiqui River, with a beautiful suspension bridge leading to the 500-acre primary rain forest reserve on the other side. Established by Giovanna Holbrook in 1985 and owned and operated by the Holbrook family and Holbrook Travel in Gainesville, Fla., SVL is a pioneer in the Costa Rican ecotourism movement. 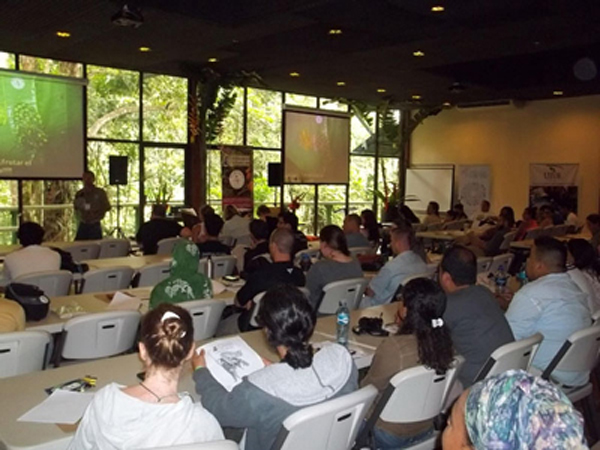 Presentations by herpetological experts were just one of the many activities attendees enjoyed.

I am a teacher who first visited SVL 10 years ago with my then-8-year-old son, and have rarely missed a year since. As a herper since birth, I remain convinced that I have stumbled upon herp heaven. After sharing my experiences with other herpers here in the states, I convinced a group of peers to join my son and me on future excursions, even taking groups of my students in the summers of 2006, 2007 and 2008. In spring of 2013, Andrea Holbrook approached me with the idea of hosting a herp symposium at SVL. She didn’t have to ask twice, and thus the groundwork was laid for the 1st Costa Rican International Symposium & Field Exploration. 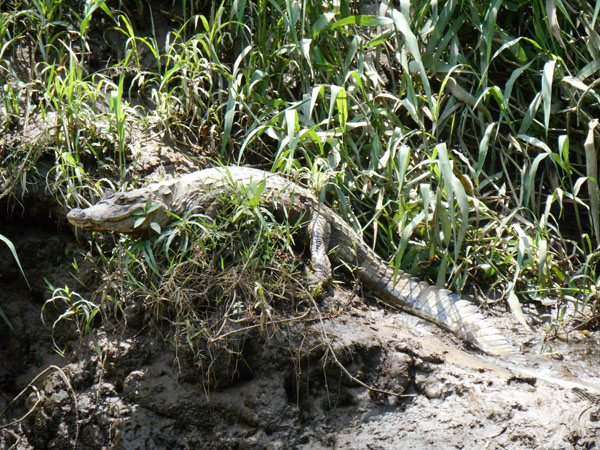 A first in the vicinity of Selva Verde Lodge, this white-headed snake was found during a night hike in the primary forest.

I have attended many reptile-related conferences over the years, and while they are always enjoyable, informative and a great opportunity to re-connect with herper friends and colleagues, what’s generally missing from these traditional events is actual live herps. We may learn about eyelash vipers, dart frogs, herp morphology, anatomy and much more, but wouldn’t it be nice if such presentations could be followed by treks afield where the animals being discussed could be observed in their natural habitats, exhibiting their natural behaviors? This is what we sought to offer at SVL in a safe, affordable and easily accessible slice of tropical paradise. 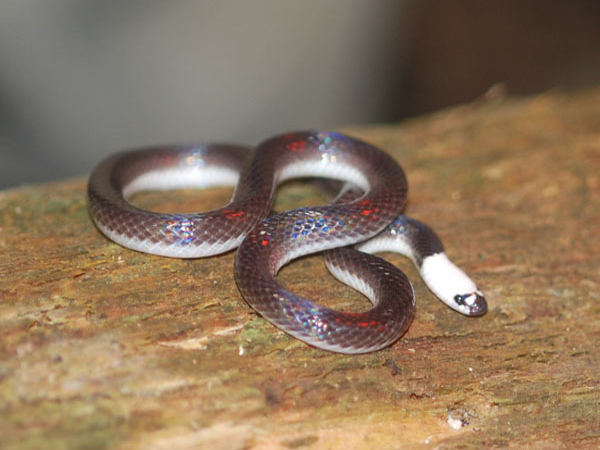 A spectacled caiman sunning alongside the Sarapiqui River.

A collaborative effort flew into high gear with SVL Assistant Manager Sergio Arias, Andrea and Giovanna Holbrook, myself and others all working to secure speakers and sponsors, and to work out all the necessary logistics to pull off a successful event. It was a daunting task, but with the help and support of a great many individuals, a dream was realized and an unforgettable event came to pass in September 2013. Approximately 50 participants representing 10 countries, including all the Americas and Europe, converged for nearly a week of fun, learning and exploration in one of the most herpetologically rich areas of the planet. 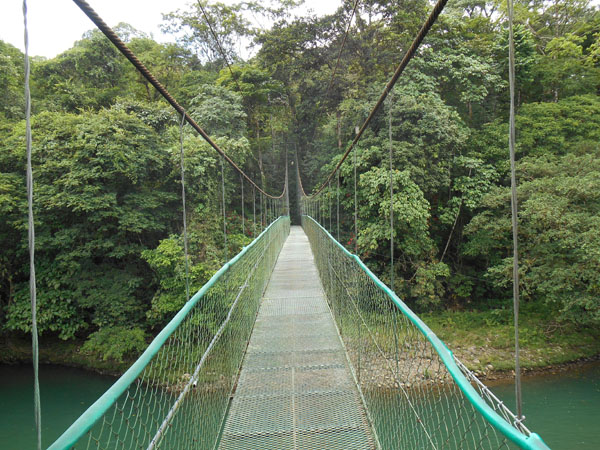 This suspension bridge connects the lodge to the primary forest reserve on the other side of the Sarapiqui River.

Highlights from the 1st Costa Rican International Symposium & Field Exploration included engaging presentations from Dr. Bill Lamar, whose contributions to neotropical herp research and conservation are legendary; Mahmood Sasa, researcher at Clodomiro Picado Institute; and Cesar Barrio-Amoros, a published taxonomist and tropical herp explorer. Alejandro Solorzano of the National Serpentarium was scheduled to present but had to bow out due to a family emergency. Quetzal Dwyer, Director of Parque Reptilandia in Costa Rica was kind enough to come in his stead, only a few weeks after presenting at the International Herpetological Symposium (IHS) in New Orleans. 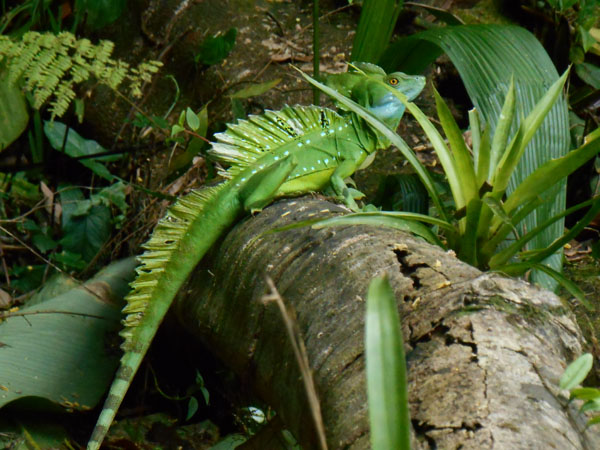 Stunning green basilisks are a common sight while walking the sidewalks that traverse SVL.

Many informative and enjoyable talks were given by students from universities throughout South and Central America. One of the largest groups of attendees traveled from Ecuador, representing Tropical Herping (www.tropicalherping.com). Their presence and contributions to the symposium cannot be understated.

A number of organized, guided treks were built into the program, and in between presentations, everyone grabbed cameras, snake hooks and other gear to venture onto the nearby trails both day and night. A white board in the conference room provided a running tally of herp species participants found. 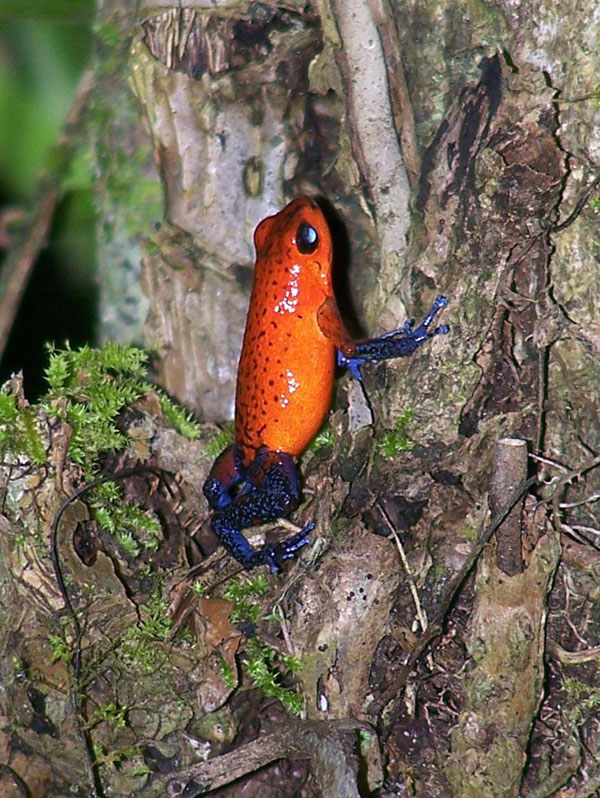 Stunning green basilisks are a common sight while walking the sidewalks that traverse SVL.

The complete species list can be found at the SVL website, but suffice it to say that if you were there, just walking from the lodge’s reception area to your room, or your room to the dining hall or bar area, you would likely have seen green basilisks (Basiliscus plumifrons), a massive green iguana (Iguana iguana), various species of Anolis and Ameiva lizards, red-eyed tree frogs (Agalychnis callidryas), green and black dart frogs (Dendrobates auratus), strawberry dart frogs (D. pumilio), spectacled caiman (Caiman crocodilus), blunt-headed tree snakes (Imantodes cenchoa) and many other animals. Spilotes, a boa constrictor, eyelash viper, hognose viper, helmeted iguana, fer de lance and many other species were found across the bridge in the primary forest. I believe 19 species of amphibians and 20 species of reptiles were recorded during the four-day, five-night event, including some that were never before see at SVL, including the white-headed snake (Enuliophis sclateri). 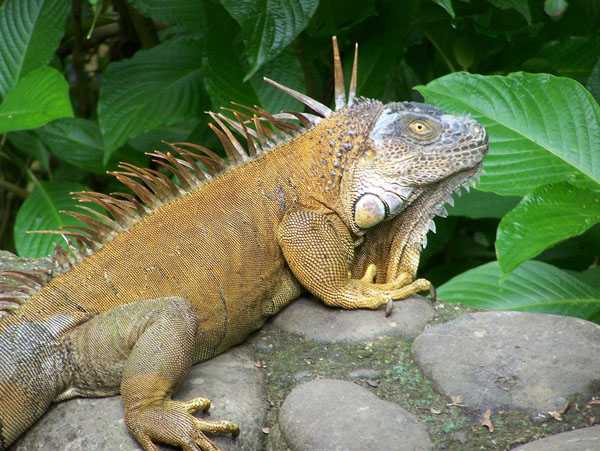 Visitors checking in to Selva Verde Lodge for the Costa Rican International Herpetological Symposium & Field Exploration were sometimes treated to views of large green iguanas basking on a rock wall near the reception area.

Herps were plentiful, but symposium attendees also were frequently entertained by the resident troupes of howler monkeys, keel-billed and Swainson’s toucans, and several species of aracari. There were also encounters with kinkajou, tamandua (vested anteater), three-toed sloth, a prehensile-tailed porcupine, white-faced capuchin monkeys and many other amazing bird and mammal species. With the exception of the capuchins, all these mammals were spotted within a stone’s throw of the dining hall/gift shop/pool area. One really doesn’t have to venture far to see myriad species of amazing flora and fauna.

Field trips to La Selva Biological Station and a boat trip down the Sarapiqui River were included, and there was also time for optional activities, such as whitewater rafting, zip line tour, horseback riding, etc. 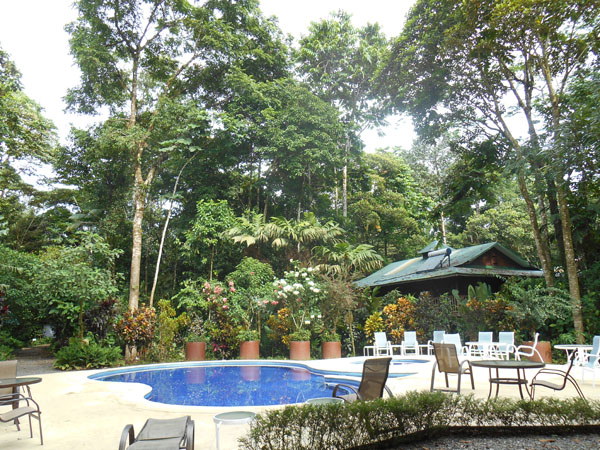 Much wildlife, herpetological and otherwise, can be seen from SVL’s pool area.

Aside from combining traditional talks with adventures afield, the real beauty of the 1st Costa Rican International Symposium & Field Exploration was the diversity of attendees. It was truly an international event. While some presentations were in Spanish and some in English, most presenters were bilingual, and there were always people eager to assist with translations when requested.

Many thanks are due LLL Reptile for being a proud sponsor. Scott Waters and Morelia Radio generously allowed us to spread the word via an online radio interview, and REPTILES magazine helped us with assembling and publishing beautiful ads in the magazine. We are eternally grateful to everyone who helped us pull off this unique event in grand fashion!

If you missed out last September, consider marking your calendars now for the Costa Rican International Congress of Herpetology (the name of the event was changed to avoid confusion with IHS) on August 2-8, 2014, with an optional week of herping the southern Pacific area of Costa Rica following the symposium. For additional info, please refer to the event’s Facebook page.