Baby turtles are sealed in plastic bag and sold as trinkets in China.

An image of live turtles being sold in sealed plastic bags as "turtle trinkets" in China surfaced again last week on Facebook and other social media sites. These hapless turtles and other animals, including salamanders, goldfish and other small animals have indeed been for sale in China since at least the 2008 Beijing Olympic games, when goldfish housed in sealed plastic bags were sold on the streets of Beijing and other cities in China. CNN reported in 2011 that the practice is widespread on the streets of Beijing, with all manner of live small animals put into plastic bags and sealed with what one vendor said was "crystallized oxygen and nutrients." The live animal bags were being sold at the time for about $1.50 each. Animal rights groups have condemned the practice, hoping to highlight the lack of animal protection laws in the world's most populous country. 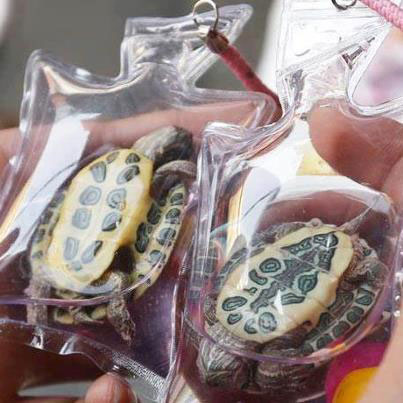 Live turtles sealed in bags and sold as trinkets in China.

Many of the comments on social media and news sites that carried the images then, and now, had a decidedly western bent to them, with some criticizing how the Chinese treat animals, while others ranting right back, citing there is no real difference between how these vendors treat the turtles and how commercial chicken or cow farmers treat their animals in the West. As of this writing, the REPTILES Facebook wall had 451 comments and 527 shares about the turtle trinkets, with the vast majority calling the practice "sick, disgusting, and cruel, while others came to the defense of the trinket sellers, saying that they are culturally different. There were also many choice comments that were too inappropriate to print. ReptileChannel sent an inquiry to the Embassy of the People's Republic of China in the United States of America in Washington D.C. for comment on the practice last week. The embassy has not yet called or emailed back.