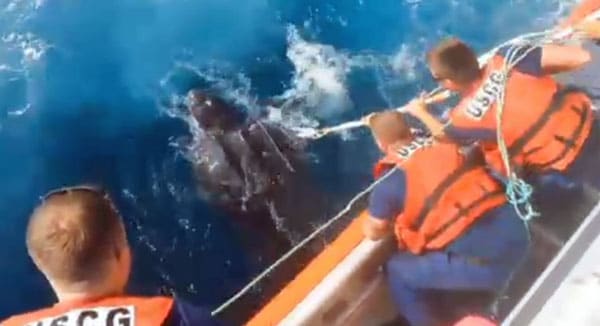 You have to love the U.S. Coast Guard. You can hail them on Channel 16 when you are on the water and your boat is in distress. They perform some of th

You have to love the U.S. Coast Guard. You can hail them on Channel 16 when you are on the water and your boat is in distress. They perform some of the most dangerous water rescues every year protecting people who get in trouble on the ocean. And they save turtles in distress. All in a day's work.

Coast Guard rescuers off the coast of New Jersey helped to free an estimated 800 pound leatherback turtle (Dermochelys coriacea) that was entangled in fishing gear off the coast of southern New Jersey. The USCG received a hail on Channel 16 from a boater who provided the guard with the information and the GPS coordinates so the USCG could find the reptile. Guardsmen from the Coast Guard’s Cape May station, along with a representative with the Marine Mammal Stranding Center found the turtle, definitely in distress. They then proceeded to methodically work together as a team and successfully removed the gear from the turtle’s flippers. The guardsmen were definitely thrilled and should be commended for reducing the endangered turtle 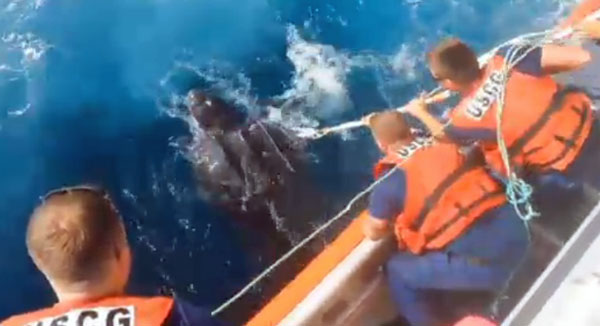 Leatherback turtles are the largest turtles in the world, easily exceeding 1000 pounds in weight. The turtles are called leatherbacks because rather than a hard shell that other sea turtles have, the leatherback has a leathery skin and lacks a bony carapace, or shell. Things that have contributed to the decline of this species includes entanglement in fishing gear, plastic bags, which they mistakenly ingest thinking that the bags are jellyfish, which is their main source of food at adulthood. The Pacific leatherback has one of the longest migration patterns, crossing some 6,000 miles across the Pacific Ocean from Indonesia to California, where they feed on jellyfish.