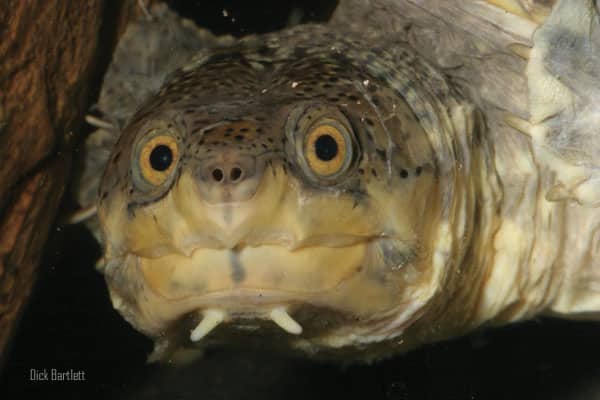 Exactly what is a Claudius? Proponents of one side of the argument feel that Claudius is a monotypic staurotypine musk turtle, a turtle most closely a

Whichever it may be, Claudius is a turtle—its full name being Claudius angustatus, with a common name of narrow-bridged musk turtle—and once you get to know it, you will find that it is a very interesting turtle.

What makes Claudius of interest to hobbyists? It is neither particularly attractive nor is it even remotely friendly (although, it does soon come recognize a keeper as a food source). And neither is it inordinately small nor excessively large. What is there about Claudius that makes the species so memorable? 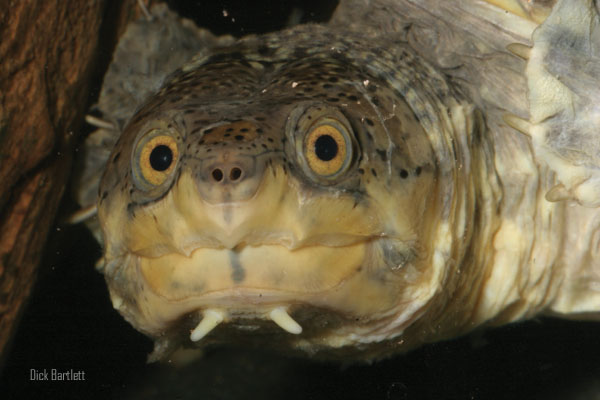 Claudius angustatus is adult at between 4 and 6½ inches in total length. Most are from 4½ to 5 inches long.

If you are lucky enough to have one, you will soon learn that it is the physiology and the attitude of this turtle that keeps it at the forefront. The more you work with Claudius, the more interesting this rather nondescript little turtle becomes.

Turtle research guru Carl Ernst attributes the generic name of this Latin American turtle to a single oft-used adjective: defective. And this may well actually be the descriptive that best fits this turtle. If you compare the bridge (the narrow bit of shell that connects the plastron to the carapace) of Claudius with the bridge of other turtle species, it will be found to be “defective.” On Claudius, this connector is very narrow (giving rise to the common name of narrow-bridged musk turtle) and consists of ligaments rather than rigid shell.

But whenever I think about Claudius, I think of the ancient Roman, Claudius, a tribal leader who was a ruthless enforcer of the laws pertaining to debtor and creditor—and the key word in that sentence is ruthless. In my estimation, the word ruthless describes the reputation of the turtle Claudius to a T!

The narrow-bridged musk turtle is often aggressive (but not always fatally so) to congenerics, as well as to turtles of other species. In fact, because of its aggressive interactions with other turtles, no matter the species, C. angustatus reminds me most of the cheloniophilous (turtle-eating) alligator snapping turtle (Macrochelys temminckii) than it does of any of its musk or mud turtle relatives.

Although it apparently is not found on Mexico’s Yucatan Peninsula, this interesting musk turtle ranges southward from central Vera Cruz and northern Oaxaca to northern Guatemala and Belize. Although usually associated with shallow water habitats, this turtle has also been known to aestivate in burrows some distance from the water. It may be encountered in ponds, oxbows, shallow river edges and creeks, and they are said to prefer water bodies with muddy bottoms.

Claudius angustatus is adult at between 4 and 6.5 inches in total length. Most specimens are 4.5 to 5 inches long. The robust hatchlings are about 13⁄8 inches in length. 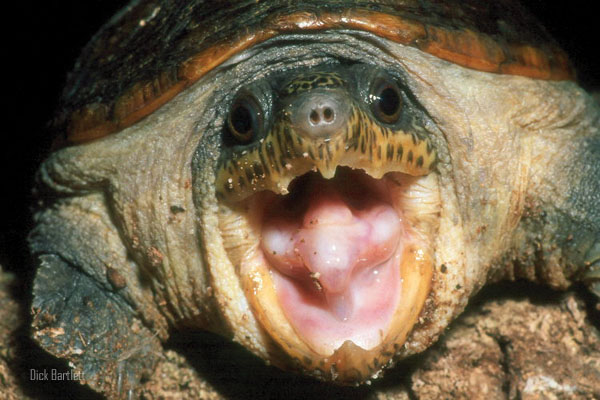 Claudius have powerful jaws, and they are not shy about using them.

The ground color of the high-domed, broadly oval, weakly tricarinate carapace varies from olive black (many examples from the wild are this color) to olive-gray, or olive-horn. There may be thin darker markings radiating outward from the carapacial areolae. The scute sutures are darker than the surrounding shell. The carapace of aged examples may be pitted. This is especially so on wild specimens. The tiny plastron and the bridges are an unmarked horn to egg-shell white or pale gray.

Ventrally, the skin is an off white to light gray. The dorsal surfaces of the legs, tail, neck and head are darker gray to olive-charcoal and are flecked or peppered with darker spots. The mandibles are light with darker spots or vertical barring. A small light area, hardly larger than a pin point on the immature Claudius but increasing in size as the turtle ages and bearing dark spots, is present on the top of the snout. The upper mandible is tricuspid. The bottom mandible is strongly hooked medially.

Claudius are carnivorous. The principle diet of my Claudius is sectioned nightcrawlers, but these turtles also eat snails, minnows, thawed fuzzy mice and some prepared food. Although not insatiable, it does take a considerable amount of food to satisfy them. While feeding, be very careful of where you place your fingers. In their eagerness to eat, these turtles will roar to the surface, elevating the anterior of their shell well above the water line. The neck is long and the feeding response is a fast and remarkably hard strike. The jaws are strong enough, and the hold tenacious enough, to have the most staid hobbyist quickly cry uncle! Believe me, with my fingertip punctures, I speak from experience!

As hatchlings, I kept my Claudius one-each to small, easily cleaned, plastic shoeboxes. On their ample and varied diet, the little turtles grew quickly and the shoeboxes quickly graduated to a sweater box, then to a 10-gallon tank, and soon to a 20-gallon long aquarium containing 10 inches of water and a landing space. Unlike other musk and mud turtles that I have kept, all of which were very much bottom dwellers, it became obvious that the Claudius spent most of their waking time swimming actively in the mid-water column. They continued to grow, and I came to realize that these active turtles would actually utilize as much space as I could (or would) give them. So I pulled a 125-gallon tank out of storage. This tank has a footprint of 2 feet wide by 6 feet long by 18 inches tall. I decided, although warned otherwise, to try to keep them communally. 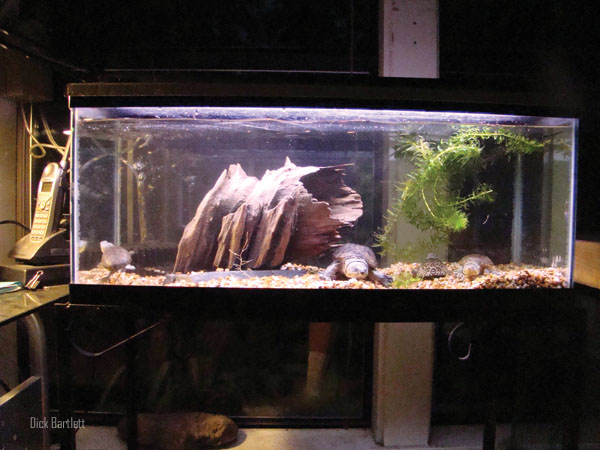 The author took a chance and housed his Claudius communally, but this is something that required careful monitoring to make sure all tank residents were tolerating one another well.

I readied the tank-10 inches of conditioned water, several large chunks of driftwood to provide visual barriers and an area of 6-inch deep sand to afford the females a nesting area if the turtles ever bred. Two power filters provide a current and assist with water clarity. The water is kept at room temperature (78 to 82 degrees Fahrenheit). As an afterthought, I placed a basking light above one of the pieces of driftwood floating at the water’s surface.

I introduced the turtles-three Claudius (one male and two females, and one similarly sized Mexican giant musk turtle (Staurotypus triporcatus), simultaneously to the setup, stood back and held my breath. At first all turtles just dropped to the bottom and sat. Then the Claudius noticed each other (the Staurotypus was ignored), and the chase was on. Snapping at each other, the turtles scooted here, they darted there, they swam under the driftwood and over it. In pursuit of each other, the Claudius all traversed the length of that 6-foot-long tank and back in an instant! Hmmmm, I thought. This just isn’t going to work. And then, about when I had decided to separate them, as suddenly as the chase had begun, it stopped. The Claudius dropped to the bottom of the tank and began slowly walking about. As they neared each other and then came in contact, I waited. They sniffed and prodded each other, and then, with no adverse interactions, continued to plod along.

Of course, active though they may be, Claudius do not swim continually. That said, except for the occasional break for basking, mine swim most of the time that they are awake. They are truly a pleasure to watch.
As they became more familiar with their tank, the turtles began clambering atop the driftwood to rest and bask. And to my surprise, the Claudius began to actually partake, often singly but sometimes communally, of the illuminated and warmed basking site. Once arranged suitably they sprawl out, neck and limbs fully extended, for a half an hour or more.

Although I hope to soon breed Claudius, because I have not yet done so, from this point on, most comments made are merely speculation or hearsay, and should be considered unsubstantiated. I do have 1:2 (the male is on breeding loan from a friend) that are now sexually mature and copulation was witnessed on one occasion. At the moment, there appears to be only one successful breeder of this taxon in the United States, and almost all of the babies supplied by him to hobbyists are females.

Current wisdom leans toward acknowledging at least three forms of sexual determination in turtles. In two forms, the sex is determined by the nest temperature (temperature-dependent sex determination, TSD or TDSD species [also known as ESD, environmental sex determination]) during the second trimester (perhaps ground moisture or other environmental cues also figure in). In the third form, the sex is determined genotypically (GSD [genetically determined] sex). Where temperature sensitivity is involved, the sex-determining middle trimester is referred to as the thermosensitive period (TSP). Simply stated (in some cases this is actually oversimplification), lower incubation temperatures of TSD turtle species produce males while higher incubation temperatures produce females.

Although there is a paucity of literature pertaining to Claudius, that which does exist proclaims them to be one of the GSD species. But at this point, I am questioning this supposition. If the little that I think I know about the single sex hatchings of the one successful breeding program in the USA is correct, it would seem that TSD applies in some manner. Were the species GSD, the regular hatching of both sexes would seem inevitable and at least a few males would become available-and they do not seem to be.

Again, taken from published statistics, Claudius reportedly has from two to eight hard-shelled eggs, and a female probably lays two or more clutches annually. In his lab, Michael Ewart found that incubation may take up to 150 days at a temperature of 84 degrees. Dr. Ewart did not mention the necessity of a diapause in the incubation.

They Fly Through the Air With the Greatest of Ease. . . ”

Well, not quite. But change two words in that line of the old man on the flying trapeze ditty—fly and air to swim and water—and you then have an accurate description of the swimming abilities of this remarkable "aquabat." I have had many turtle species, but I have never had another, no matter how aquatic or how specialized, that equals a swimming Claudius in overall speed and agility. They not only easily keep up with the live minnows that I drop periodically in their tank, but they overtake and eat the fish while hardly missing a beat.

At times, rather than pursuing their prey, Claudius may become a wait-and-ambush predator. At such times, they position themselves in what they probably feel are strategic positions (often in hollows of the driftwood) and quietly lie with mouth widely agape, apparently angling for a careless minnow. The turtles will snap furiously at anything (including other turtles) that bump against their open jaws.

Today, captive-bred (usually female) Claudius are occasionally available to hobbyists who wish to keep an alert, active and somewhat-defensive turtle. The turtles are rather expensive—usually between $500 and $1,200 each at the time of writing. The asked price seems to be dependent on size and carapacial pattern. If a male were to become available, it is likely that it would be more expensive than the females. Perhaps, with time and additional breeding programs, the price will become more affordable. At least can all hope so.

Dick Bartlett is a herpetologist/herpetoculturist who has written hundreds of articles and many books, some with his wife, Patti. He has bred 175 captive herp species. A frequent lecturer, he has participated in field studies in North and Latin America, and he led tours to the Peruvian Amazon.