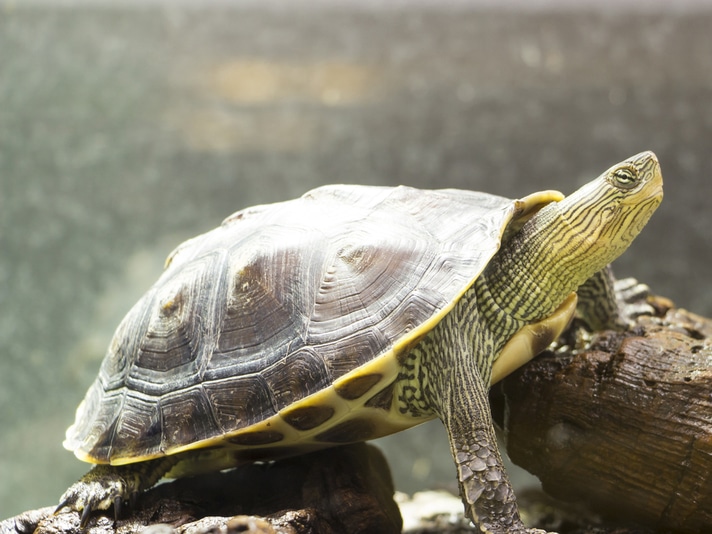 Although Ocadia sinensis is endangered in the wild, it is available in the hobby. Captive-bred turtles are your best bet.

Hailing primarily from eastern China southward to central Vietnam and eastern Laos, this species also occurs on the islands of Hainan and Taiwan. It is well-adapted to a wide range of climatic conditions, including temperate, subtropical and tropical zones. A true aquatic generalist, it inhabits virtually any type of freshwater habitat from large lakes and rivers to small ponds and drainage ditches. Its muscular limbs and fully webbed feet make it a strong and able swimmer, even in rivers with moderate currents. 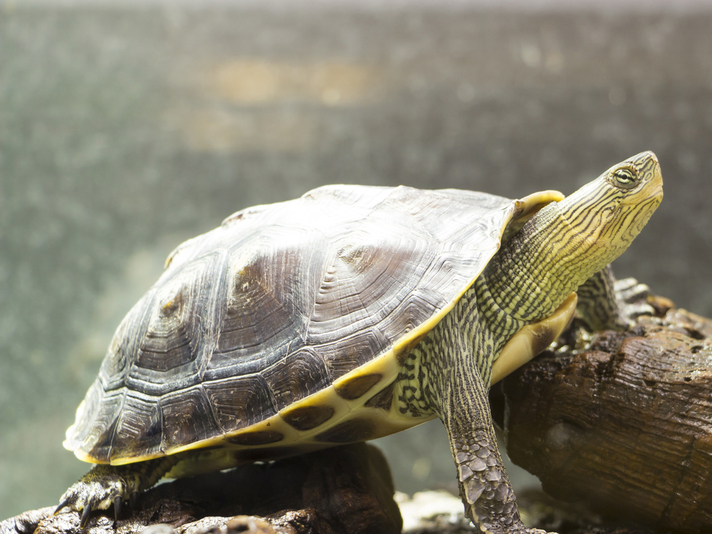 Listed as Endangered on the World Conservation Union’s Red List of Threatened Species, O. sinensis faces a very high risk of extinction in the near future. Human activity presents the primary threat within its native range. Human population growth and the corresponding expansion of cities and towns into rural areas have destroyed much of the turtles’ habitat.

In addition to this large-scale habitat loss, turtle harvesting for the international food and pet trades has greatly reduced wild populations. Although it is difficult to curtail the negative impacts of urban growth and development, there is some hope that the increasing frequency of captive breeding will help alleviate some of the pressures on the few remaining wild populations.

The golden thread turtle’s pattern consists of bright yellow stripes contrasted with darker stripes (ranging from green to brown to black) on the face, neck and limbs. The head’s crown is deep-green to black, and eyes are a glowing gold with a dark horizontal bar through the iris and occasionally several partial bars or spots, as well. Usually broad yellow swirls are on the underside of the limbs and soft tissue within the shell cavities.

Upon hatching, this turtle’s shell bears a moderate medial keel and weak-to-moderate lateral keels. The tail of hatchlings is remarkably long. The carapace’s surface texture is rather granular, but this gradually subsides with growth, and so does the prominence of keels and tail length in relation to body size. In profile, the shell is typically moderately deep, but some individuals can be somewhat flat. Marginals are slightly recurved along the front and sides, and rear marginals are somewhat flared.
Hatchling turtles range in size from just less than to slightly more than 11⁄2 inches. They can reach 4 inches in their first year, but slower growth is more often the norm. Growth rate can be controlled to a large degree by the amount of food offered; the more food available to a turtle, the faster it grows.

Like other turtles, sexual maturity is a function of size rather than age. Sex can typically be discerned when turtles are about 4 inches long. Males have longer, thicker tails and slight plastral concavity. The species reaches maturity when males measure about 5 inches and females about 7 inches. Maximum size for males is roughly 8 inches, but females can reach up to 12 inches.

In captivity O. sinensis is a very undemanding charge. At a minimum, five items are required to provide them with a safe, healthy environment: a secure, suitably sized container; a sturdy basking platform allowing the turtle to emerge from water and dry completely; a quality, full-spectrum light source; temperature control for air and water within the tank; and a nutritious diet.

Hatchlings can be maintained in virtually any container with a water depth not less than 11⁄2 times the straight length of the turtle’s shell and a minimum volume-to-size ratio of 10 gallons per inch of turtle for a single animal. For each additional animal, add 5 gallons per turtle inch to the total water volume. Glass tanks, sweaterboxes and plastic storage bins work well. Stock tanks are highly recommended, especially for larger turtles. Considering the above rule of thumb, a 10-inch adult female requires no less than 100 gallons of tank space. A breeding group of one 5-inch male and two 10-inch females would need at least 150 gallons.

Tank furnishings should be appropriate to the size of the turtles housed within. Small turtles can accept smaller basking accommodations, but never underestimate the ability of even the smallest turtle to destabilize piles of stones or driftwood. Turtles can easily get pinned by shifted rock and wood, or trapped underwater by narrowed openings in hidy-holes and caves. Shifting stones or logs can also crack or smash glass tanks, so take the utmost care to prevent potential catastrophes.
As previously mentioned, turtles must be able to dry thoroughly. Ocadia sinensis is highly adapted to a basking lifestyle, and allowing it to completely dry aids its shedding process, and prevents fungal and bacterial infections that can sicken or even kill the turtle.

Many excellent brands of full-spectrum lighting are available. The key is to select a bulb that provides UVB rays — not just UVA. UVB is the portion of the light spectrum that allows the turtle’s skin to synthesize vitamin D3, which is essential to calcium metabolization. Ambient temperature and any other temperature control devices being used will determine whether UVB-producing fluorescent or mercury vapor bulbs are appropriate. Generally speaking, fluorescents generate considerably less heat than mercury vapor bulbs, so use of fluorescents typically necessitates an additional heat source, such as an incandescent bulb, for basking.

What Do Golden Thread Turtles Eat

A true omnivore, O. sinensis consumes practically any type of edible plant or animal material. In the wild the turtles are known to feed primarily on vegetation, but they also readily consume carrion or any animal slow enough to be caught.

Captive turtles seldom refuse food, and even new hatchlings usually accept commercial pelleted food for their first meal. As with any turtle, however, provide a balanced diet with roughly 30 to 40 percent protein content, high calcium and low phosphates, and a wide variety of vitamins and minerals. Romaine lettuce, water lettuce or water hyacinth, and duckweed can also be left floating in the water for them to nibble on.

When selecting a golden thread turtle, there are several points to consider. This species is in serious trouble in its native range. This point cannot be overstressed, so with that in mind, the first selection criterion should be captive bred versus wild caught. It is always better to select captive-bred turtles. Purchasing them does not contribute to the depletion of wild populations. Additionally, captive-bred turtles are generally healthier and better acclimated to life in captivity. If they are to be introduced into an existing collection, there is also a considerably lower likelihood that they will introduce harmful diseases into your collection.

Another point is that golden thread turtles make fine cohabitants in community tanks. They are gregarious in nature and comparable to American cooters and sliders (Pseudemys and Trachemys spp.) in virtually every respect. As with any turtle community housing, I strongly recommended that the largest turtle is not more than twice as large as the smallest turtle in the tank. This limits the potential for accidental injury, especially during feeding time.

A third point is related to the second: The disproportionately long tail of hatchlings and juveniles seems to be irresistible to fellow hatchlings of any species. It is rare for a young golden thread turtle to reach 4 inches in length without having some of its tail bitten off. This tail-nipping rarely results in severe injury, and in some cases tails have partly regenerated. Moreover, by the time the turtle reaches maturity, it may be virtually impossible to tell that nipping ever occurred.
Overall, Ocadia sinensis is an undemanding and indisputably gorgeous species for the hobbyist. Given proper care and attention, this engaging turtle will reward its keeper with years of satisfaction and enjoyment.