Dermochelys coriacea ingested an 18-inch by 18-inch piece of plastic.

A leatherback turtle (Dermochelys coriacea ) found dead last summer near Bar Harbor, Maine likely died due to the effects of ingesting sheet plastic, according to Fenceviewer, a community news website that covers Hancock County, Maine. The 400 pound turtle was found dead off Schoodic Point on Aug. 22 and had been stored in a freezer at the George B. Dorr Museum of Natural History at the College of the Atlantic. Allied Whale, a marine mammal research group, recently performed a necropsy on the turtle and during the process removed an 18-inch by 18-inch piece of sheet plastic that was obstructing the turtle's stomach. Although the plastic was not conclusive evidence that it caused the turtle's death, the researchers speculate that it could have caused its death. 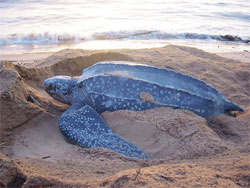 Leatherback sea turtles (Dermochelys coriacea) represent the largest sea turtle species. They can reach between 5 and 6 feet in shell length and weigh up to 1,000 pounds.

“Finding the plastic there was the lesson of pollution, of finding garbage in the ocean,” Rosemary Seton, Marine Mammal Stranding Coordinator for Allied Whale told the Fenceviewer.

The IUCN's Marine Turtle Specialist Group lists discarded plastics as a major threat to sea turtles, and especially leatherbacks. These turtles as adults feed almost exclusively on jellyfish, and they often mistake floating plastic bags, balloons, and other trash that ends up in the ocean as a food source.