The Ozark Hellbender (Cryptobranchus alleganiensis), and the eastern hellbender salamander were named to a top 10 list of American species threatened by freshwater pollution in a report released today by the Endangered Species Coalition. In its report, "Water Woes: How Dams, Diversions, Dirty Water and Drought Put America’s Wildlife at Risk" the coalition outlines how the loss in water quality and quantity has detrimentally affected the two hellbenders and other animals in 10 ecosystems in the United States. Other popular areas in the report that are listed as at-risk include Florida's Everglades, the Colorado River, Tennessee River, and the Sierra Nevada Mountains. 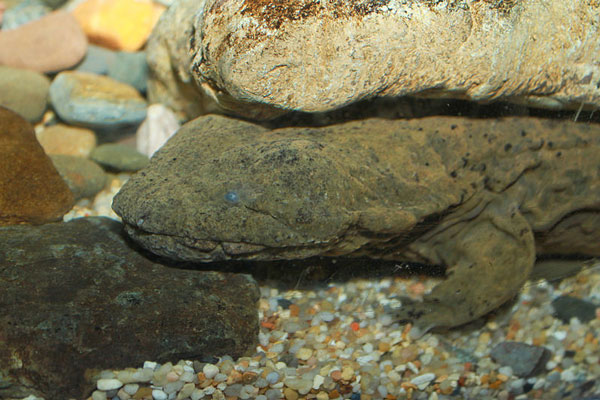 According to the U.S. Fish and Wildlife Service, the Ozark hellbender has declined approximately 75 percent in the last 30 years and the eastern hellbender has declined by as much as 30 percent. It is estimated that there are less than 600 Ozark hellbenders left in the wild. The salamander's range is limited to the White River of southern Missouri and northern Arkansas. No figure was reported on the eastern hellbender, which has a much larger natural range than its Ozark counterpart. The Ozark hellbender was added to the Endangered Species List in 2011, with the U.S. Fish and Wildlife Service citing fungal diseases and physical abnormalities as factors that contributed to the listing. Hellbenders are flat in shape with wrinkled and folded skin. They can live up to 30 years with their entire life spent living in water. They can grow up to two feet in length and live in bodies of water that maintain constant levels of dissolved oxygen.

A captive breeding program between the St. Louis Zoo's Ron Goellner Center for Hellbender Conservation and the Missouri Department of Conservation yielded some success last year as more than 60 hellbenders hatched at the zoo. When these specimens reach 3 to 8 years old, they will be released back into the areas that they are known to inhabit along the White River.

To read more on how you can help the hellbender, request a brochure detailing its history and ecology, and learn how you can assist with the conservation of this species, visit Purdue University's Help the Hellbender page here.