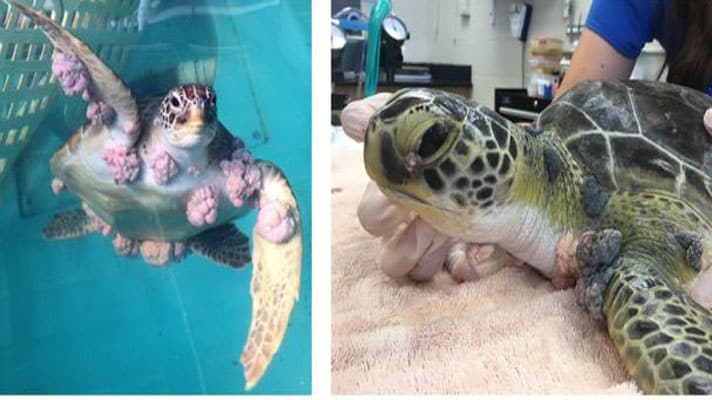 Fibropapillomatosis is wreaking havoc in sea turtles around the world.

Fibropapillomatosis, a herpes-like disease that is negatively affecting sea turtles around the world can be successfully treated with therapies that are used to treat human cancers, according to a new University of Florida study published in Communications Biology. 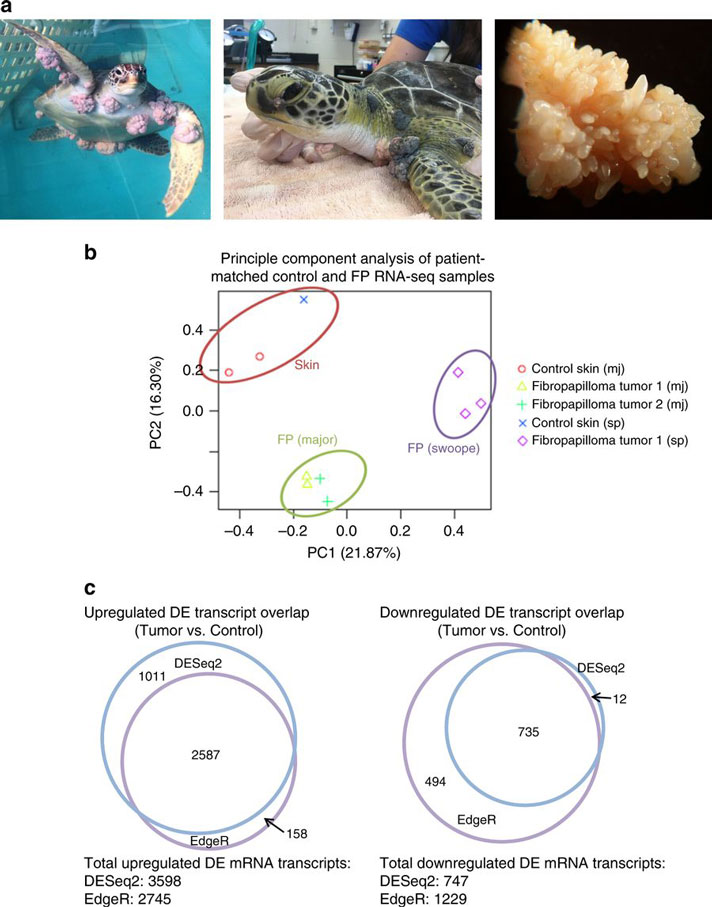 Fibropapillomatosis tumors and differential transcript expression. a Fibropapillomatosis-afflicted green sea turtles (Chelonia mydas). Left and center: Turtles at the Whitney Sea Turtle Hospital, FL, prior to tumor removal surgery. Right: High magnification image of a fibropapilloma tumor, which was profiled by RNA-seq. b Principle component analysis of patient-matched control and fibropapillomatosis RNA-seq samples. Upon admittance to the hospital, Swoope (sp) had a tumor score of class 3 (Hawaii classification system)105, and severe (FPI > 185.5) (Southwest Atlantic classification system)106, while Major (mj) had a tumor score of class 2105, and moderate (FPI = 81.5)106. c Overlap of transcripts differentially expressed in fibropapillomatosis tumors, independently called by DESeq2 and EdgeR from the RNA-seq data. Area-proportional Venn diagrams were generated using BioVenn (http://www.biovenn.nl/)107. Transcripts were considered to be DE if passing the following cut-offs: false discovery rate (EdgeR) or adjusted p-value (DESeq2) of <0.05 and log2 fold change of >2 or <−2

According to the University of Florida, researchers have been treating sea turtles with anti-cancer drugs that have had positive effects in keeping the cancerous tumors from regrowing. In the course of their study, researchers also noted a potential link between the fibropapillomatosis tumors in sea turtles with prolonged exposure to ultraviolet light.

“During this research, we found that we had seen the same underlying genomic traits before – in human cancer types,” lead author David Duffy, courtesy assistant professor at UF’s Whitney Laboratory for Marine Bioscience told the University of Florida News. “Sea turtles around the globe are rapidly contracting this disease, so we need to understand how it is spreading so quickly and how to stop the tumors from growing. With human medicine techniques, it takes only a few tumor samples to make significant process toward combating both factors.” “These same turtles are already endangered and face a host of other man-made problems, including pollution, oceans awash with plastic, entanglement, boat-strikes, and nesting habitat and coral reef loss. The last thing they need is a virulent cancerous disease.”

Duffy said his team was able to prove they could uncover the secrets and mysteries surrounding the sea turtle tumors using human oncology techniques.

“It gives us the ability to quickly understand the disease and identify new ways of treating and rehabilitating turtle patients,” Duffy said. “Imagine the benefits of applying this kind of knowledge to other emerging wildlife diseases.”

The study, “Sea turtle fibropapilloma tumors share genomic drivers and therapeutic vulnerabilities with human cancers" can be read in its entirety on Nature.com.