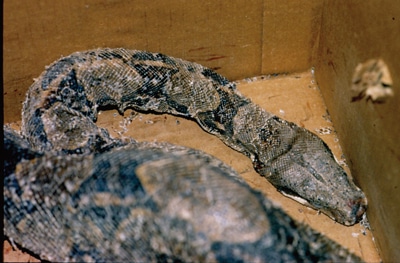 How to Recognize and Treat Reptile Ectoparasites

Ectoparasites can quickly do serious damage to your reptiles.

You may not see them until it is too late. They seem to spread like wildfire, and they multiply like rabbits. They suck blood, spread disease and kill before you even know what is happening. They are. . . ectoparasites!

Ivermectin Treatment For Snake With Mites

This may sound like some campy 1950s horror movie about mutant, radioactive monsters invading a small town, but ectoparasites are real. And they can be a real threat to our pets. If you keep reptiles long enough, sooner or later you will have to deal with them. This article will give you some insight on what they are, why you should worry about them, and how you can stop them before they stop your reptile. 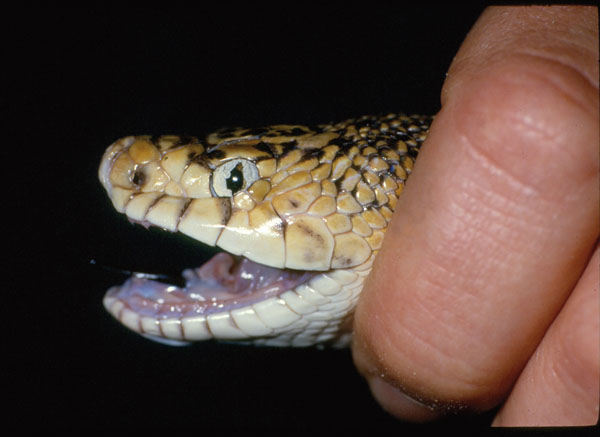 Mites lodged around the eye of this pine snake caused the poor shedding and a retained eyecap.

Ectoparasites are organisms that live upon another to the benefit of themselves and the potential detriment of the host. In many cases, they are little more than an annoyance to animals in the wild, but they have the potential of creating severe disease. A reptile may sleep in one spot, bask in another and shed its skin somewhere else, and ectoparasites may never reach high numbers. In captivity, our pets are kept in comparatively smaller areas. The parasites are confined as well, which can potentially create huge populations of these blood-sucking vermin.

The least common ectoparasites that I’ve come across are leeches. These soft-bodied, wormlike organisms are found in aquatic turtles and crocodilians. In my practice, I’ve only seen them located on wild-caught turtles. They can cause anemia or infection at their attachment site. In my experience with leeches, I have found them easy to remove with a pair of forceps. A little salt solution placed on the leech helps with any stubborn individuals.

Ticks and mites are the most common ectoparasites encountered in herpetological medicine. Abnormal behavior in your pets may be the first sign of infestation. They may spend atypical amounts of time in the water bowl or show increased activity in trying to rub off the parasites. Severe infestation may cause problems with shedding, blood loss, decreased appetite, lethargy and even death. These parasites have also been implicated in the transmission of diseases, such as paramyxovirus and inclusion body disease (IBD) infections in snakes. 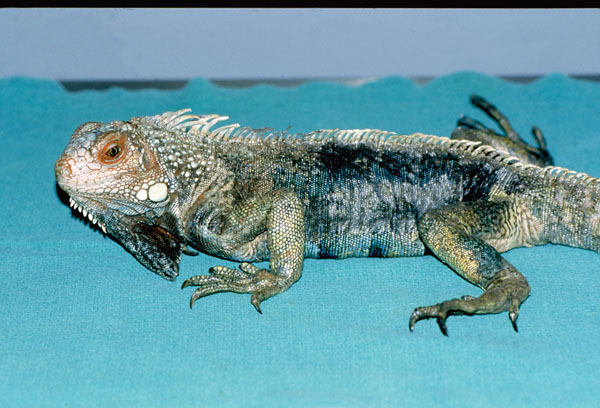 The large patches of dead black skin were actually caused by huge numbers of chigger mites in this green iguana.

Because of their large size, ticks are usually observed before they become a problem. They may be located under the scales of snakes and lizards, and along skin folds or the soft skin of tortoises. Minor skin irritation may be noticed at the attachment site. In monitor lizards, ticks may be found in the nostrils, which could lead to breathing difficulty.

Not long ago, a tick species capable of feeding on ruminants and transmitting the exotic heartwater disease was found on imported African tortoises in Florida. This led to the ban on importation of several tortoise species from Africa as well as requiring health certificates for the interstate transportation of even captive-born specimens.

Mites are more difficult to observe due to their small size. Close examination using magnification of both the animal and the environment may aid in diagnoses of mite infestations. Mites may be observed drowned in water bowls or hidden along crevices at the tops of cages. Examine around the eyes, gular skin folds and around the vent for these tiny parasites. Snake mites (Ophionyssus spp.) generally appear like small black poppy seeds. Lizard mites (Hirstiella trombidiformis) and chigger mites (from the Trombiculidae family) are red and may stand out readily on the skin’s surface.

There is no 100-percent safe and 100-percent effective treatment for reptile ectoparasites. Our goal is to kill one organism without harming the other. No matter what product is used, follow all manufacturer directions closely. Improper use of antiparasite products may be toxic to both the host and the owner. Debilitated animals may be more susceptible to the toxic effects of insecticides. Both the animal and the environment must be addressed or reinfestation is almost guaranteed. 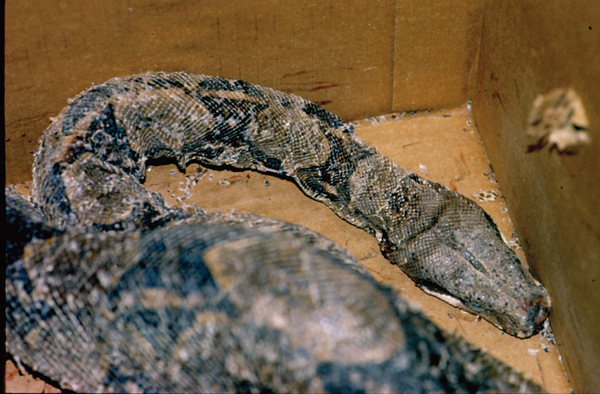 Poor husbandry and dirty, wet conditions created a debilitating mite infestation on this boa. You can see it is having difficulty shedding its skin because of the problem.

The first step to avoiding infection is to quarantine all new animals before adding them to your collection. Some authors recommend quarantine periods from three to six months. During this time, regular examinations can identify parasite as well as other health problems. Consider a moat system, where the cage is placed in a shallow pan of water with a few drops of dishwashing detergent to prevent any mites from spreading to other cages.

Ticks can be removed with forceps. Grab under the head on the mouthparts or abscesses may form if the parts are left in the skin. Apply an antibiotic ointment to any irritated skin. A safe and effective treatment regime for tick infestations has been described in veterinary literature using a permethrin product. It was sprayed directly on infested tortoises (a one-second burst into the leg openings of small tortoises or two seconds for larger specimens) or on the substrate of lizards and snakes ( a one-second burst per square foot of cage surface from a distance of 12 to 15 inches), and the animal is returned to the cage after several hours when dry. If you are concerned about tick infestations in outdoor habitats, there are protocols for treatment, but it may be wise to contact a qualified pest control specialist to help.

Dirty, moist cages are ideal for mite infestations. Remove the animal and clean all surfaces of the cage thoroughly. A diluted bleach solution (1:20) is an inexpensive and effective cage treatment. Next, treat the cage with an insecticide (see “Insecticides” section). Wipe the surface down with a damp cloth to remove any residual. Allow drying and airing out for at least 24 hours before returning the pet to the enclosure.

Infested animals should be kept in disposable, nonporous substrate and furniture to prevent hiding places for the parasites. Paper works well. The cage and substrate should be cleaned at least twice weekly.

The environment must be treated for successful eradication of snake mites. In one stage of the life cycle, mites can live for up to 40 days without feeding, and a single female can lay 60 to 80 eggs after just two to three feedings. If you only treat the infected pet, mites will reappear somewhere down the road. Mites can travel from cage to cage. Consider treating the surrounding cages even if mites are not found.

Daily water soaks and baths are a nontoxic treatment that has the ability to drown mites and decrease parasite load but will not be effective in eradication. This is a good choice for severely debilitated pets until they are healthy enough to handle other treatments. To prevent drowning, do not leave animals soaking unattended. The water should be warm but not scalding.

A light coat of olive oil over the entire animal is another nontoxic method of killing mites by suffocation. Leave the oil on the pet for an hour then rinse it off. Yes, this can be as messy as it sounds, and the environment must be treated or the infestation will return.

A number of insecticides have been recommended for use on live animals and the environment. Pyrethrins and pyrethroids can be effective for snake mites, but avoid products that contain oils or insect growth inhibitors, as they may cause increased absorption and toxicosis. Some dog and cat flea products may have concentrations higher than what is considered safe for reptiles. Two products that veterinary literature has found safe for use on reptiles are Durakyl by DVM Pharmaceuticals (0.35 percent resmethrin) and Mite and Lice Bird Spray by 8 in 1 Pet Products (0.03 percent pyrethrin).

Spray the insecticide on the pet to kill the mites, and then rinse with warm water to reduce pesticide absorption. Repeat every 10 to 14 days. Provent-a-Mite by Pro Products can be used for treating the environment but I do not recommended applying it directly on snakes and lizards. You may lightly sprinkle 5-percent carbaryl powder, a carbamate insecticide, on the animal and the cage surfaces. Rinse an hour later and repeat every seven days.

Dichlorvos strips, such as No Pest Strips by United Industries, another organophosphate, have long been used for mite treatment in snakes. The strip is cut to 6 millimeters per 10 cubic feet of cage and placed there for three hours, three times per week for two weeks. Both you and the pet should avoid direct contact with the strip. There are many varying times periods recommended in the literature, and unfortunately, overexposure is common. This was the treatment of choice when I started out in this hobby so many years ago. However, because of all the other products now available, dichlorvos is not as commonly employed.

Ivermectin has been used as both an injection and topical for treating ectoparasites. To create a topical spray, use 0.5 milliliters of 1-percent ivermectin to 1 quart of water. Shake vigorously, and spray the animal and cage every two weeks. The solution is light sensitive, so keep it in an opaque container. Do not use ivermectin on or around turtles and tortoises, as they seem to be much more sensitive to toxicosis.

I have had good luck using Frontline Spray by Merial (0.29 percent fipronil) for mites and ticks. A light spray over the animal can be repeated weekly. Some recommend washing the spray off the pet after five minutes to decrease toxicity.

This is just a sample of some of the ectoparasite treatments available. No matter what product you choose, use common sense to prevent problems. Heavy infestation of ectoparasites can kill but so can insecticides, so be sure your pet is stable before beginning treatment. Seek professional veterinary care if you are in doubt, as supportive care including fluids, antibiotics and even blood transfusions may be required before exposure to toxic insecticides. Overexposure is a common problem, so follow all labeled directions closely. Seizures, lethargy and death may be signs of insecticide toxicity.

Toxic exposure to insecticides is not only a concern for your pets, but it is for you as well. Apply sprays in a well-ventilated area, and wear protective gear, such as rubber gloves, aprons, and face shields or goggles. Thoroughly clean any spilled material, and wash skin surfaces with soap and water if exposed.

Does this sound a little scary? It can be. Because ectoparasites can be fatal or even transmit other diseases to our pets, it is well worth the effort to eliminate them from your home. A combination of quarantining all new acquisitions, good husbandry and cleaning practices is highly encouraged and recommended. Treating infested pets and their environment, treating long enough to break the life cycle, and catching infestations soon enough before they have a chance to run rampant through your collection are all keys to effective eradication.

Once your animals are safe and healthy, then you can rest assured that you did your due diligence. Now you can sit on the couch with a big bowl of popcorn and break out your copies of the 1959 cult classic "The Giant Gila Monster" or 1965 "Gammera the Invincible." Now those are good herp horror movies.

Tom Greek, DVM, is a graduate of the University of Wisconsin, Madison, and a Southern California native. His interest in reptiles began at the early age of 5 when he received his first pet snake. He currently practices small- and exotic-animal medicine at Greek & Associates Veterinary Hospital in Yorba Linda, Calif.