Know your snake inside and out with this snake immune system anatomy overview.

Snakes, unlike mammals, do not have lymph nodes. When a snake is sick, you won’t see swollen lymph nodes under the chin or arm pits like you might in people, dogs and cats. Snakes have a lymphatic system, but it just is not as easy to find. In some species, such as boids, a tissue similar to tonsils is found in the esophagus. 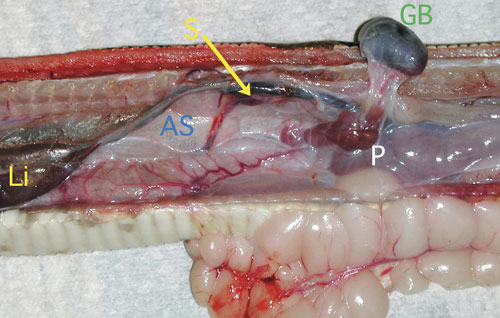 Found in the third quarter of the snake are the liver (Li), air sac (AS), pancreas (P), gall bladder (GB) and spleen (S, yellow arrow).

The spleen is a small, spherical, reddish organ located between the gall bladder and the pancreas. In younger animals it functions in the creation of red blood cells, and in older animals it helps in the destruction of cells and in blood storage. In most snakes the spleen is usually tightly adhered to the pancreas, and the two organs are often collectively referred to as the “splenopancreas.”

The pancreas is found just behind the gall bladder and just after the end of the stomach. It is a major endocrine organ. Among many things, it helps regulate the body’s blood-glucose levels and produces digestive enzymes.

Interestingly, a snake’s gall bladder is not associated with the liver like it is mammals, lizards and turtles.

Reptiles have one or two pairs of parathyroid glands found either just in front or just behind of the thyroid. These difficult-to-find glands regulate calcium and phosphorus levels in the body. Because most snakes eat whole prey, the parathyroid glands do not play as significant a role in disease as they do in other reptiles, such as the green iguana.

About three-fourths of the way down a snake’s body are a pair of adrenal glands commonly called “stress glands.” These glands are found closely associated with the gonads (testes or ovaries) and urogenital structures (kidneys and ureters). The adrenals are pinkish, tubelike structures found adjacent to, or just in front of, the gonads. These glands are very important and function similar to the mammalian glands. When a reptile is stressed, the adrenal glands produce corticosterone, a type of steroid. This is important because the hormone suppresses an animal’s immune system, thus making it more susceptible to disease.