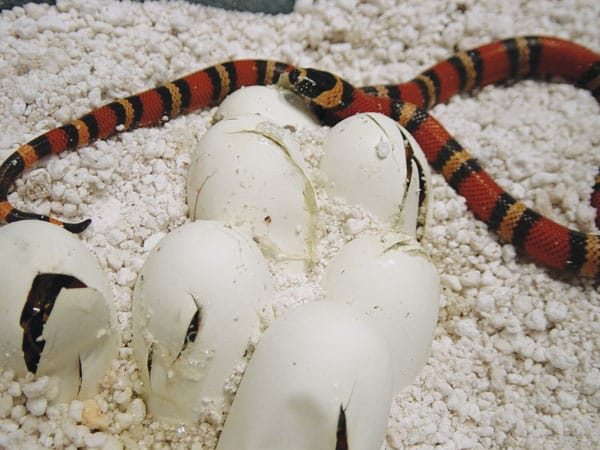 Native to the leaf litter of rain forests in Honduras, Nicaragua and northeastern Costa Rica, the Honduran milk snake (Lampropeltis triangulum hondurensis) is a medium-bodied snake with black and red bands. Females tend to be larger than males, but both sexes average about 5 to 6 feet long. Some, however, can top out at 8 feet.

Sometimes called “hondos,” these snakes become sexually mature as early as 3 years old, and they can be productive for up to 15 years. Easy to sex visually, males have longer, thicker tails. Females should be at least 3 feet before breeding, but I prefer mine to be more than 31⁄3 feet.

I keep my adults in enclosures measuring 48 inches long by 12 inches wide by 16 inches tall. Heat tape provides a hotspot of 84 to 86 degrees Fahrenheit. The enclosure’s cool end is in the mid to low 70s. Night temperatures can drop into the 60s, but I provide a heat gradient 24 hours a day except during brumation. Water is always available in the cool end in a bowl large enough for a snake to soak. 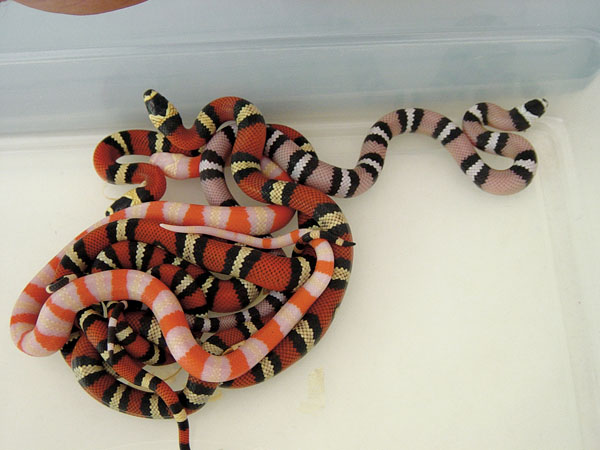 Hondos like to burrow and require a substrate that allows it. I use pine or aspen. Dark, tight hides are also necessary to help these snakes feel secure. I place a humid hide with damp sphagnum moss on the cool end and a dry hide on the warm end. These can be as simple as a plastic shoebox with a hole cut into the lid, or they can be as elaborate as a ceramic cave. My hides measure about 6 inches long by 9 inches wide by 2 inches tall.

Compared to North American milk snakes, hondos are big eaters, and most quickly take to thawed frozen rodents. A feeding schedule of one meal every eight to 10 days works well for adults. Growing hatchlings are fed every four to six days. A 12-inch-long baby receives one pinky mouse, but a15-inch-long baby gets three pinkies or one hopper. Adults receive up to six adult mice per feeding. Occasionally I feed them weanling to small rats, quail or chicks.

On the first of November I switch from a light cycle providing 12 hours of daylight to one providing only eight hours. I only use ambient room light, not direct lights, in my enclosures. Last meals are given mid-November. By the beginning of December I turn off the heat tapes and reduce light to only four hours per day. By mid-December the room is dark the entire 24 hours. 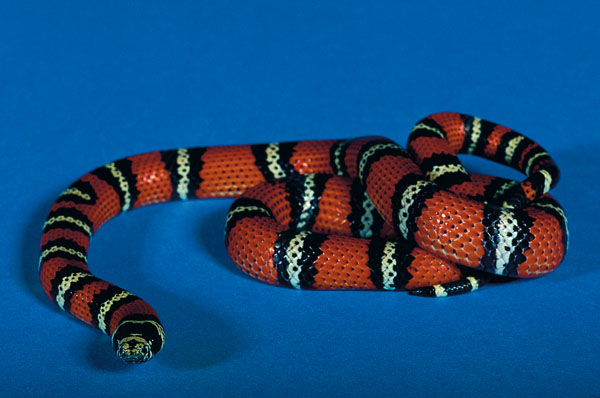 Room temperatures range from 45 to 70 degrees with an overall average of 60 degrees. I believe the absence of light and external heat is equally, if not more, important than trying to achieve a set temperature when brumating hondos. By the beginning of February I turn heat tapes back on and provide eight hours of light each day. Meals resume within the first week. By the end of February lights are back to a 12-hour cycle.

Male and female Honduran milk snakes are ravenous coming out of brumation. Fed heavily, females ovulate and shed by mid-March to early April. However, sometimes a female doesn’t ovulate until her second shed around June or July. Ovulation is obvious because the last two-thirds of a female’s body swells with ova. Around the same time, males usually stop feeding and are ready to mate.

Breeding usually occurs immediately upon introductions. Females not ready buck advancing males with tail slapping. Females that have ovulated and are ready stretch out, accept male advances and lift their tails in what is called “cloacal gaping.” After I’ve witnessed several copulations, I remove males after a week and feed females heavily.

Eggs are laid within four to six weeks of copulation. I place a 20-quart plastic egg-laying box, which measures about 12 inches long by 8 inches wide by 6 inches tall, around the enclosure’s midpoint and use sphagnum moss inside. This acidic medium inhibits mold while retaining moisture. Gravid females usually stay in these boxes and only come out to eat, drink and defecate.

To breed hondos, I simulate seasonal change by cooling them. Brumation starts in November and lasts about 60 days. Potential breeders are fed heavily in the spring and fall with a meal every four to five days. 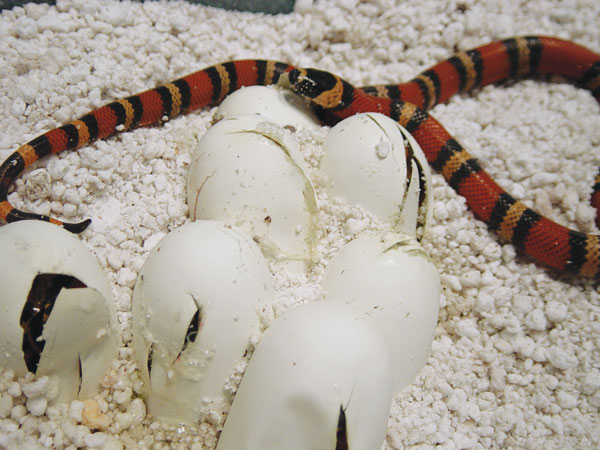 Hondos have large, tubular eggs white to cream in color and firm to the touch. Infertile eggs are small, yellow and waxy looking.

Females have a pre-lay shed about 10 days before depositing eggs. If the female crawls in and out of her egg-laying box and moves around the enclosure after this pre-lay shed, then something is wrong. Check temperatures to ensure they are not above the high 70s, and make sure the moss isn’t too wet or soggy; it should be damp and fluffy. Check daily for eggs after the pre-lay shed, but remember that egg laying is physically taxing for the snakes, so keep direct contact to a minimum. 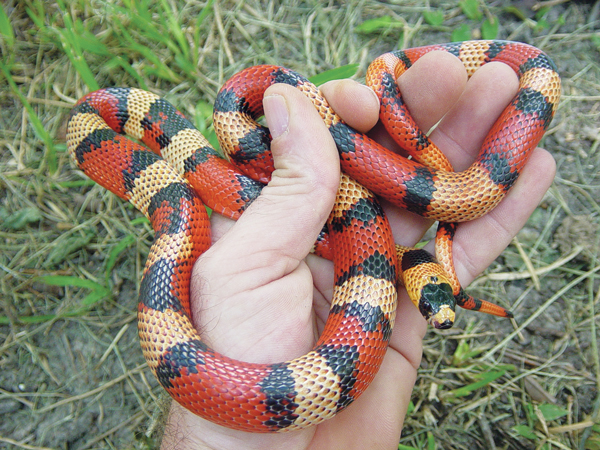 Typically females lay three to 24 eggs at one time, and eggs laid before or after the initial event are usually infertile. Hondos have large, tubular eggs white to cream in color and firm to the touch. Infertile eggs are small, yellow and waxy looking. Often eggs are stuck together in one mass when laid — do not separate them! Orientation is important. A snake embryo adheres to the egg’s wall; changing orientation can cause the embryo to dislodge, resulting in its death.

Incubating eggs requires high humidity and stable temperatures. I use plastic shoeboxes and completely cover eggs with damp vermiculite or perlite. These boxes are placed on the top shelf of my bathroom closet, and the temperature is kept at 80 degrees. Avoid temperatures of 85 degrees and higher; they result in spinal kinks and deformities. Hatching occurs in 65 to 75 days.

Bloated with yolk when they emerge, usually within 48 hours of pipping, hatchlings won’t eat for a month or so. For a first meal, most take thawed frozen pinky mice. Problem eaters are rare and can usually be traced to a husbandry issue. I keep hatchlings in 10-gallon aquariums with the same kind of setup as the adults. Although I have never seen cannibalistic behavior, keep a close eye on babies housed together, and feed them separately.

Many recessive morph traits have been refined in the hobby for Honduran milk snakes. Some double homozygous morphs, which exhibit two recessive traits at the same time, are fairly common now. Snows (double homozygous albino and anerythristic) and ghosts (double homozygous hypomelanistic and anerythristic) are examples. Many breeders sell offspring that carry recessive traits but don’t physically display them at a fraction of the cost they sell the visual morphs, so buying and then breeding these snakes is an affordable way to attain the morph you’re after. Add pattern aberrancies, such as striping, splotching and vanishing patterns, to recessive morph traits, and the sky is the limit on what  will be produced. 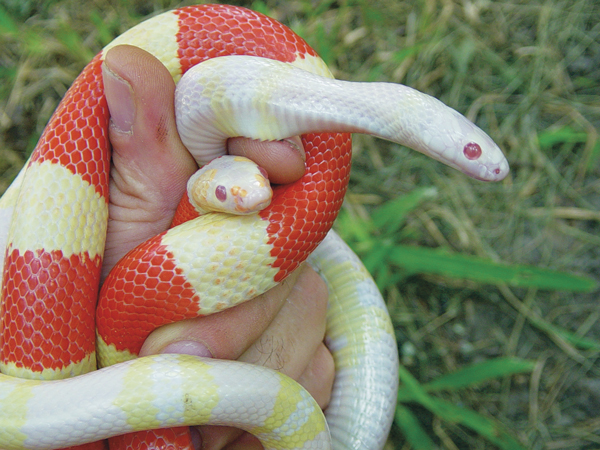 Many recessive morph traits have been refined in the hobby for Honduran milk snakes.