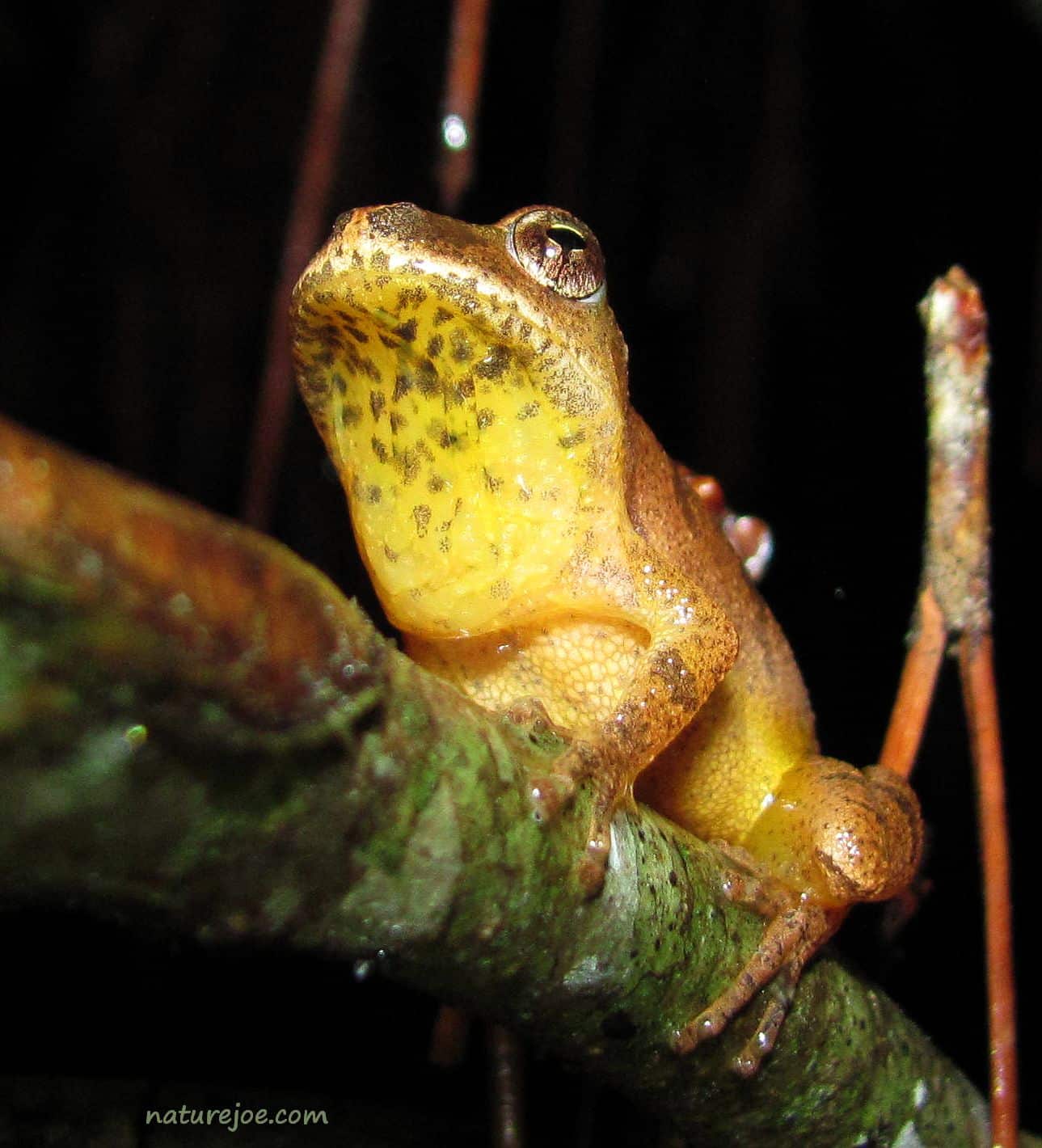 Spring peepers literally dominate the Florida nightscape on winter evenings, and stepping outside in the evenings may reveal a chorus of them in

Spring peepers literally dominate the Florida nightscape on winter evenings, and stepping outside in the evenings may reveal a chorus of them in a variety of places. A large distant chorus sort of reminds me of sleighbells, which is appropriate since I usually start hearing them around Christmas!

There are some differences between these (Hyla crucifer bartramiana) and the northern spring peepers (Hyla c. crucifer). One thing that's noteworthy about spring peepers is they are often the only frog heard calling in the winter even though on warmer nights they are often joined in chorus by the Florida chorus frog (Pseudacris nigrita) and the little grass frog (Limnaoedus ocularis). During a really warm spell of winter weather a chorus of Florida froggage can be quite impressive!

A rainy and warm 70-degree January night for example can also bring others out as well, and in addition to the two listed above, they can also be joined by the Aesop's frog (Rana aesopus), the Florida leopard frog (Rana s. sphenocephal) the spadefoot (Scaphiopus holbrookii), and the common toad (Bufo terrestris). This is the exception rather than the rule though, and when it gets too cold for the crickets to chirp, the peepers are the only sound that can be heard on a cold and near-freezing Florida woodland night. 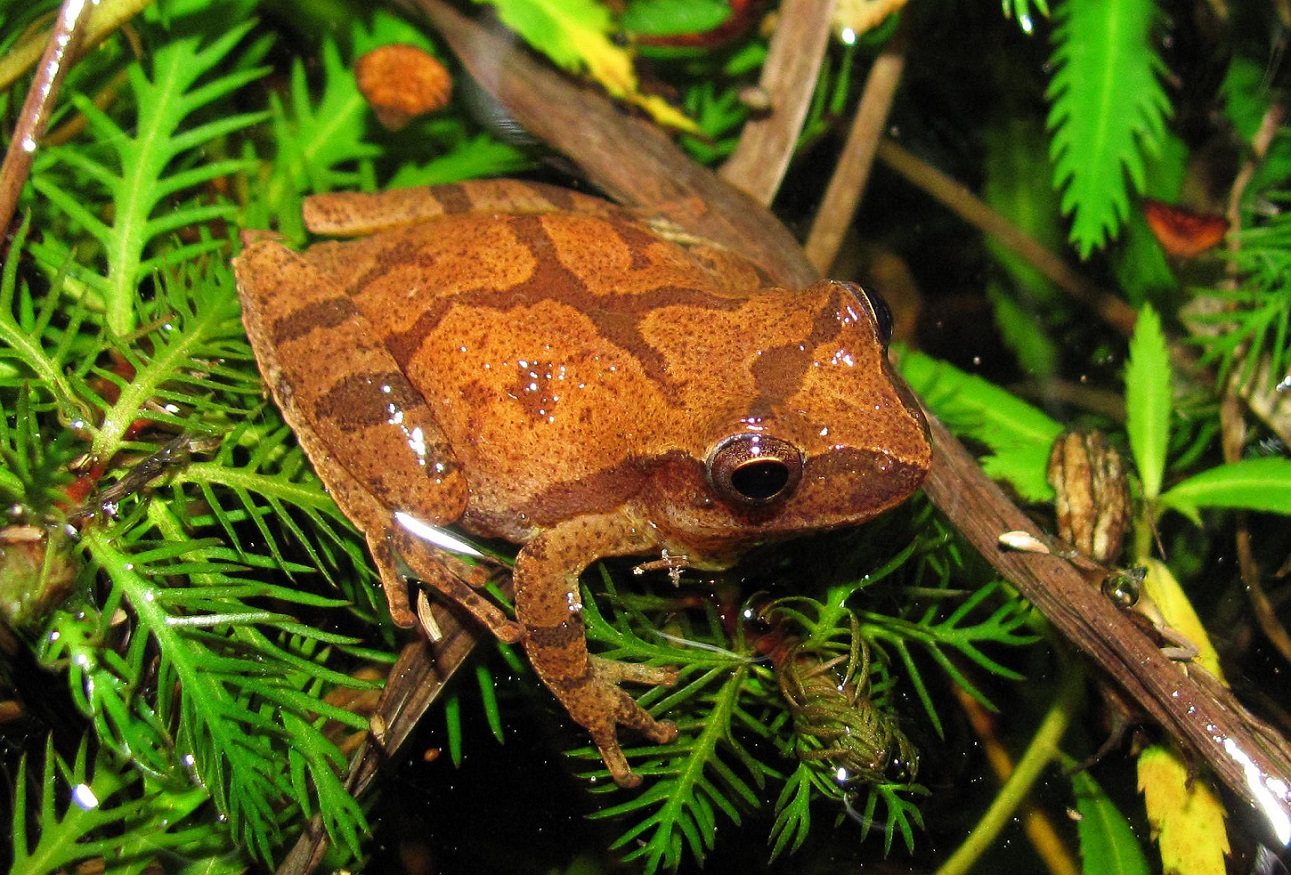 When comparing the two peepers (the northern and southern), the southern peeper appears to be more orange in color. Seldom is a true gray or brown one encountered, without at least a hint of orange, and this makes them often easy to spot among the backdrop of drab-and-green that so easily accompanies them at the breeding site. When I compare these to the Pennsylvania populations I have encountered, which are the Northern peeper, these seem to have a richer, fuller, and deeper "Peep!" than the Northerns, and when I first heard them in the woods I mistook them for some sort of squeaky machinery or farm equipment! Another difference I noticed is the Southerns seem to have a more spotted belly, especially with the females.

As far as the spring peepers go, part of the scientific name is "crucifer," as in "crucifix," and it is true that many have the X on the back in some shape or form, but the perfect X is hard to find. Among a good crowd of peepers you'll see all sorts of patterns – usually with some resemblance of the X but in some individuals there's not even a hint! Some are spotted and dotted, others have large blobs or blotches, while others have a washed-out pattern that shows practically nothing at all. If these individuals weren't seen right there peeping happily among the crowd, they could easily be mistaken for other species of treefrogs. 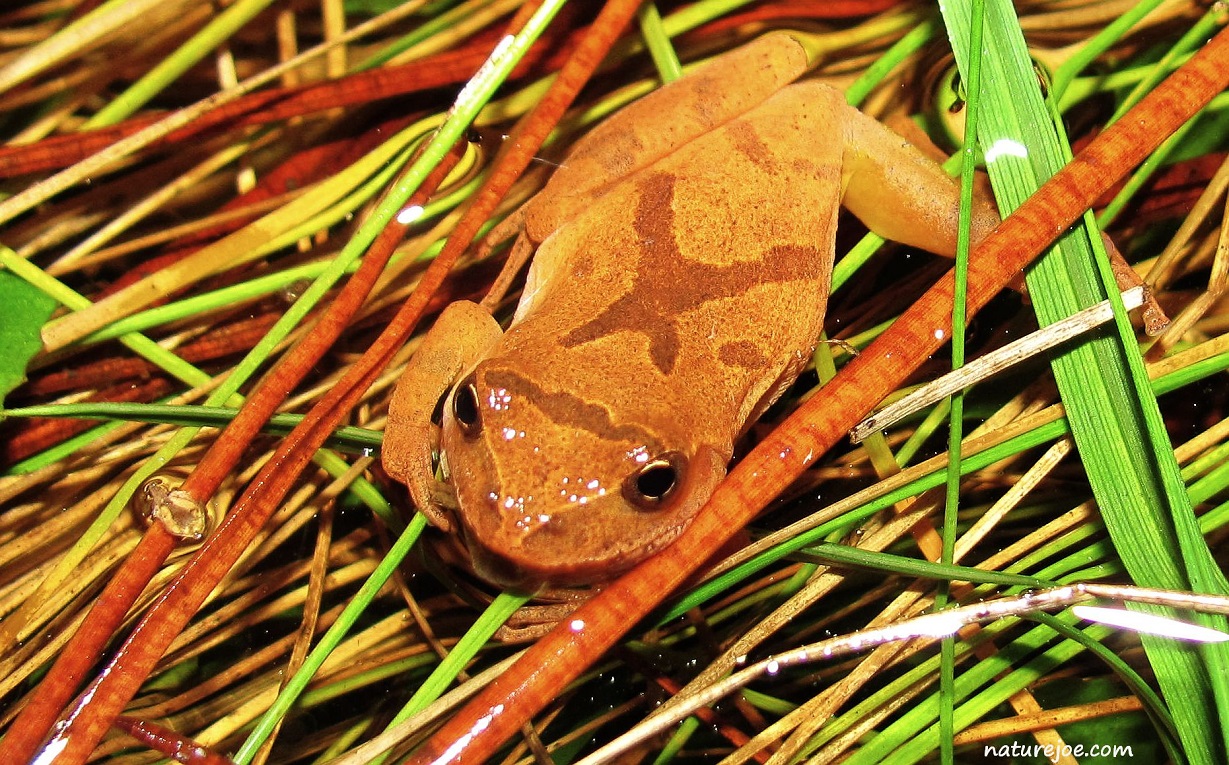 The spring peeper is best recognized by the "X" pattern on the back.

An interesting study I did was to collect a pair one year and place the resulting eggs in a large plastic container, which was filled with a variety of native vegetation, as well as a single guppy to keep the mosquitoes under control. The eggs hatched and the rearing was a success, and two years later I had a yard full of spring peepers! I since tried this with other species with grand success, and this shows how they seem to return to the spot from which they metamorphosed. Concerning keeping these in captivity, it's not really recommended, since the small size of the adults may make it a frustrating task to find food small enough for them. From experience I like them for photography subjects, since these can be seen in a lot of wild poses as they clamber through the low vegetation, and even off-season encounters are sometimes made of these, and in some cases can be confused at quick glance with the Pinewoods treefrog (Hyla femoralis), and this brings up their pattern.

Another thing concerning the spring peeper is their reaction to temperature. Of course a deep-freeze will stop them in their tracks, but really warm weather seems to do about the same on them. Let a strong January warm front come through with nighttime lows in the 70's, and these are much reduced in activity, but when the temps are in the 50's to near 60, the choruses can be almost deafening, and your ears are left ringing after leaving the swamp! A few can even be heard when the frost is forming on the grass. On frigid nights they call from beneath thick clumps of dead grasses that overhang the water, which will "buy them time" on such a cold night by trapping in the warmth of the water.  As the warm rains come and a 60-degree night is upon them, they will be sitting boldly right up on top of the same clumps of grass that once sheltered them from the cold.

Seasonally, the breeding choruses (at least in north Florida) begin around mid-December, and will continue until about the first of April, but a late-season cold snap will have them peeping several weeks after that. Occasionally a spell of dull cloudy weather in November or May will cause a few to peep from back in the bushes, up high in the trees, or from beneath the shutters of your house. In the hot summer months you'll never even know these are in your area. They dig into moist ground during extreme heat, and I sometimes encounter them while unpotting/repotting plants in my yard. 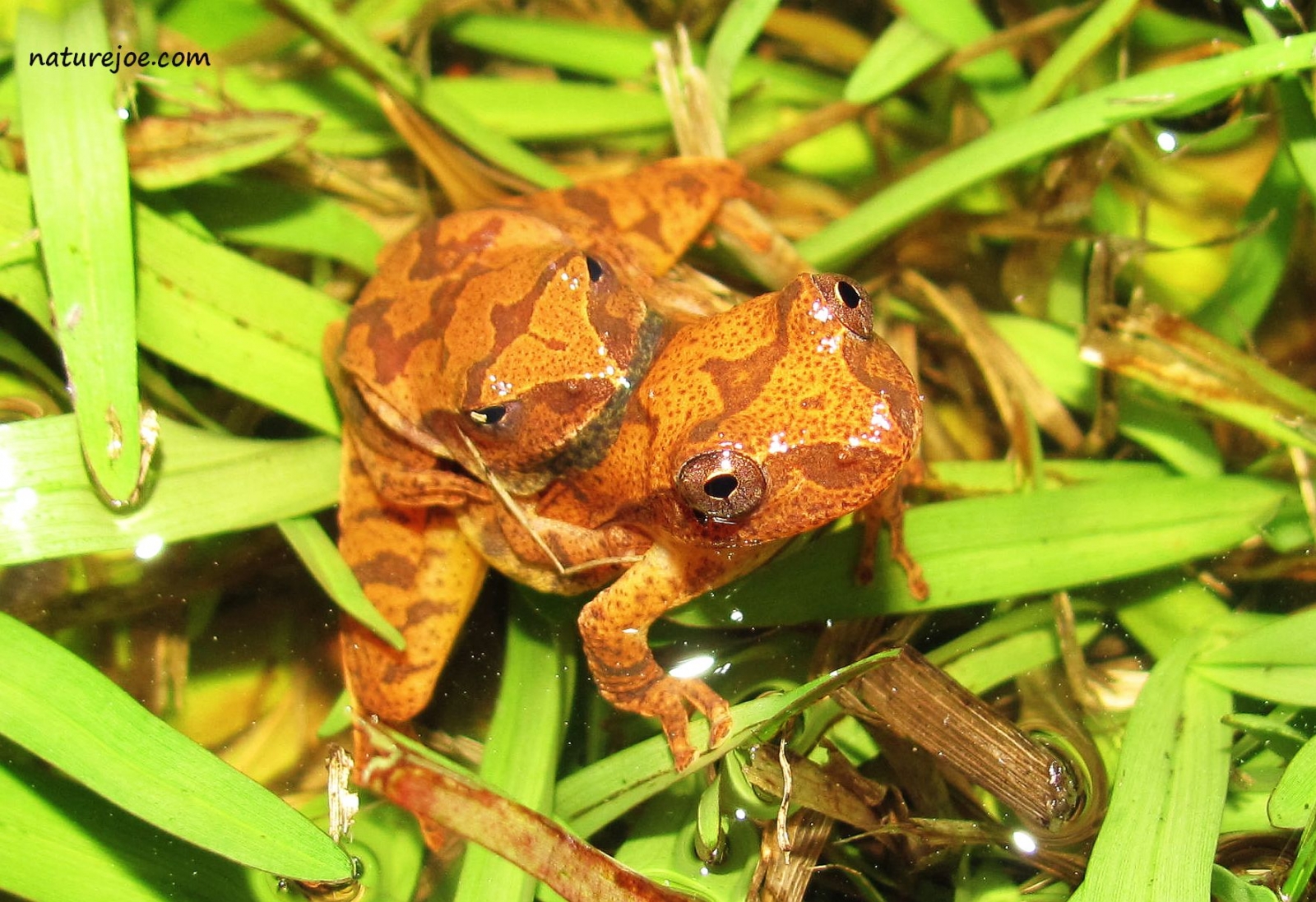 Spring peepers normally breed in Florida from December to April.

To "manage" a breeding place for these, if you're a land owner with an old field that naturally collects water in season, allow that area to remain natural and unplowed, and about once a year cut down any small trees that develop and allow the branches to lay where they fall, and you'll soon discover these noisy peepsters as well as creating a nice little habitat for other things too. If this little wetland is able to hold water for a month or more without drying up you'll have just what it takes for these, and the cutting of the invading trees will keep the area open to sunlight. This will speed up the process of development of the tadpoles. Even in a woodland pond, the eggs are laid in the areas that receive the maximum amount of sunlight for this very purpose.

"Nature" Joe (Myers) is a nature photographer, and has been an active field herper since the late-1970's, and working with groups of people of all ages in an outdoor educational setting since 1986, and can be followed on Facebook https://www.facebook.com/n.joe.myers where his nature photography and time-lapse videos can be seen publicly.