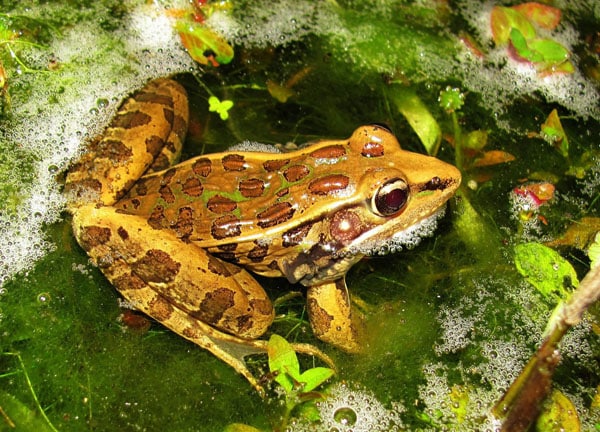 After spending much of my life living in Ohio, among the flatlands near Columbus where open-field marshes dotted the countryside, (and the Northern Le

After spending much of my life living in Ohio, among the flatlands near Columbus where open-field marshes dotted the countryside, (and the Northern Leopard Frog (Rana pipiens) was a big part of my childhood), my move to Florida was something else! When I started frogging in Florida (with my camera), I realized almost immediately that everything was different- warm steamy jungle-like growth and palmettos, water the color of iced tea, and sounds like I have never heard before back in Buckeye country.

It wasn't long before I was surprised by the presence of a Leopard frog! My first encounter with this frog was along a reedy ditch near a sand road near Leesburg, and I felt "a little closer to home" knowing I had leopard frogs down there too! 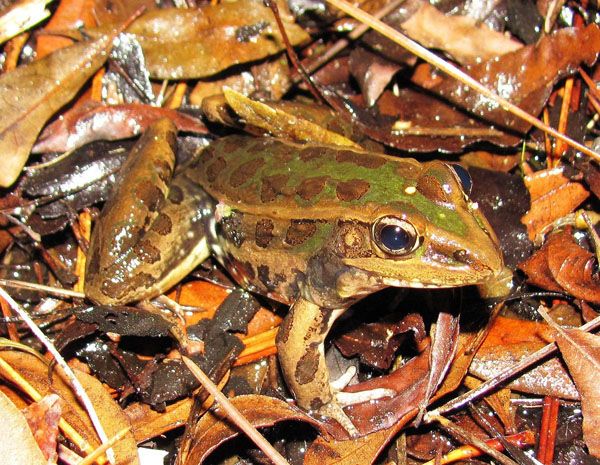 The Florida leopard frog lacks the light borders around the spots like the Northern has.

As I spent time afield and out among them I noticed both similarities and differences in them, namely the differences! The color, pattern, shape, and habitat are all very different upon knowing them, and I realized that seeing them streak through the grassy glades is about the only real similarity! The Florida leopard frog is much more nocturnal, and on rainy nights especially they can be seen far from any real habitat. I think I have seen these in just about every wet place except for the ocean! Big alligator-infested lakes, golf course ponds, Cypress swamps, bogs, rivers, wet fields, ditches. . . the list goes on and on! If there is water in it they are usually there. In Ohio, the leopard frogs were a little more choosy on where they called "home", but in Florida I even saw them hopping across the downtown streets of cities such as St. Augustine and Panama City! It also amazes me how they can all but disappear into thin air in the heat of the day, but at night they suddenly appear often in great numbers in areas where there wasn't a single one spotted just a few hours before. 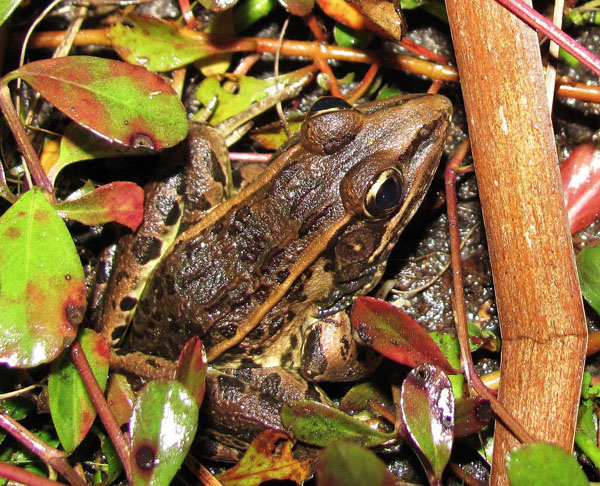 This one shows how in dark individuals the spots are often very hard to see.

As far as the color goes, I think the Northern leopard wins hands-down, since many of the Floridians are very drab in comparison, but when I explore their area in detail, some stunning patterns and varieties are encountered! I have seen them range in color from greener-than green to gray/black, and because the spots lack the light borders of their northern cousins, many dark ones appear to be spotless until looked at closely, and often I'm so convinced they are without pattern I must actually take a picture of one and look at the picture right up close to see the spots! Also the light dot in the center of the eardrum says "Southern,” since the Northerns don't have this. Also the Floridians have longer, more-pointed noses and larger eyes. 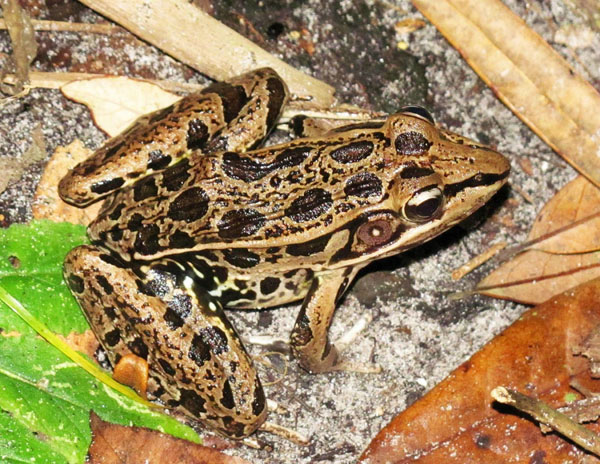 Like the Northerns, the Florida leopard frog can be nearly all green, or entirely lacking green, as seen in this individual.

One thing that amazes me about Florida is the fact I can go frogging in the dead of winter! Leopard frogs there are pretty much winter breeders, with February being a popular month for them. I remember a very froggy night on New Year's Day evening 2014, when they were calling vividly from a field that was recently flooded from heavy rains. They seem to have a really long breeding season, and I have heard them calling literally every month of the year, with a preference for breeding between January and April. I'll never forget one night a friend and I did a little experiment with them by playing recordings of other frog calls for them one night in October, and the closest Leopard frog call on the recording was the Southern leopard (R. utricularia), which left them all silent, but once we played the call of the Cuban treefrog it started them all croaking! The call is very similar. 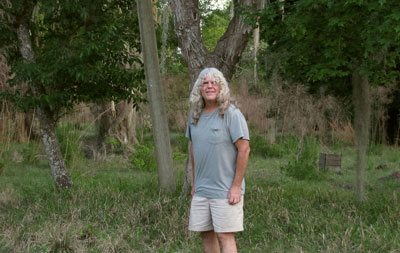 The author in the middle of a field full of Florida leopard frogs.

It's a pleasure to add many of the frogs (and toads) I meet to my website – Fabulous Froggage http://www.angelfire.com/folk/njoe57/Froggage/Froggage.html which is a photo gallery of the frogs I come across as I travel, always keeping a lookout for more species as time permits, and you'll also come across plenty of frogs and toads on my Facebook page Frogs and Toads of North America https://www.facebook.com/nafrogs where you too can join and post photos and share your frogging ventures with us.