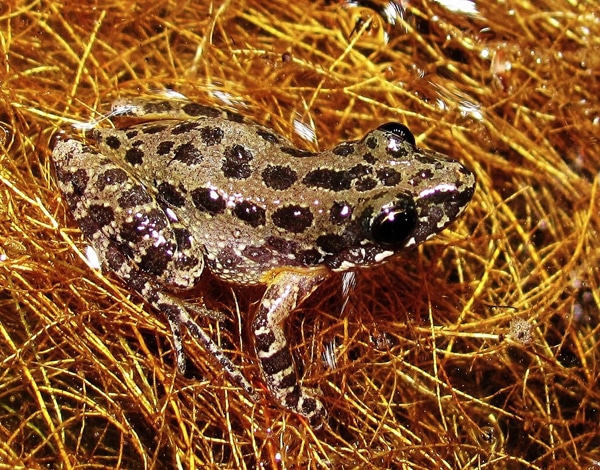 The Florida chorus frog (Pseudacris nigrita) is one of the prettiest little frogs I have ever encountered, and yet one of the hardest to find, even th

The Florida chorus frog (Pseudacris nigrita) is one of the prettiest little frogs I have ever encountered, and yet one of the hardest to find, even though hearing them during the Florida winter is nothing unusual, since these are quite common during the winter months, and can be heard from nearly a mile away. 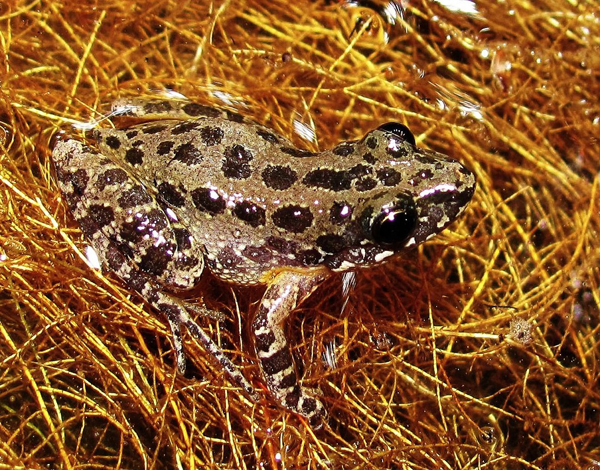 These are among the prettiest small frogs I have ever encountered.

These noisy little croaksters can be heard from great distances on calm nights, and unlike most frogs and toads they will call even in the broad daylight. When I used to go looking for the Western Chorus frog (Pseudacris triseriata) in Ohio, it was no big task (except for getting cold, wet feet!), since the Westerns would call from often open positions with only minimal vegetation in some cases, but the Floridas have a way of really hiding. These are nearly impossible to see even when you're bent right down over them and looking for them with a bright flashlight! The spring peepers (Hyla c. bartramiana) are often right there among them, as well as others such as the Florida leopard frog (Rana s. sphenocephala), which are both very easy to spot, with the "bright glowing orange" of the peepers giving them away, and with the leopards – being sheer giants over the other two!

During a typical season for the Florida chorus frog, the breeding season starts in December, and continues through March, but I have encountered breeding populations as early as late-October, and as late as mid-April. By April they are pretty much gone, but if a week or so of cool, rainy weather comes during that time, it'll bring them out for one more round. Sadly the offspring usually fails to survive from such a late breeding, because the strong April sun will usually dry up their breeding area within a week or so after the eggs have been laid. Also scattered individuals can sometimes be heard during nearly any month during heavy rains. 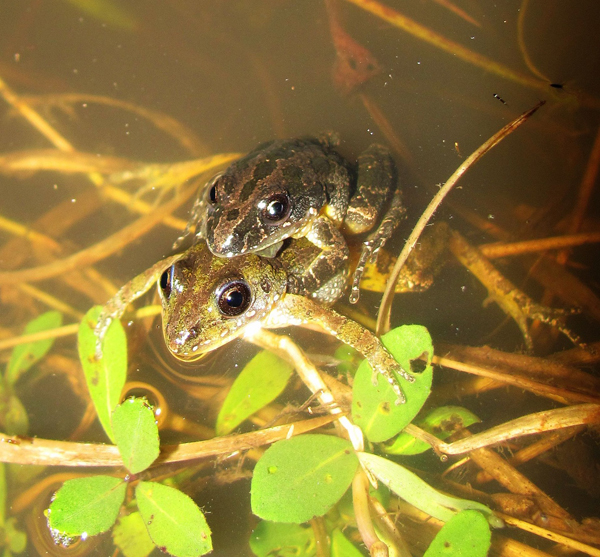 Often a breeding pair is easier to spot than a calling male. The female selects the spot where she will eventually lay her eggs.

Their breeding area is usually shallow and grassy, and is often exposed to a lot of sunlight. The spring peepers on the other hand prefer slightly deeper, more-wooded settings, but will often breed along with the Florida chorus frogs. They will breed in such areas as grassy roadside ditches, flooded sections of old fields, and the grassy/weedy edges of old water-filled tire tracks along the edge of fields. On cold, dry nights a few can still be heard, but during a heavy rain it can get quite noisy out there!

The Florida chorus frog seems to prefer temperatures in the 50's to about 70, but strangely if it gets TOO warm for them, few are usually heard until the next cold front. Their raspy trill sounds a bit like a fingernail slowly clicking along the teeth of a comb, increasing in pitch, and each call lasting about two seconds. 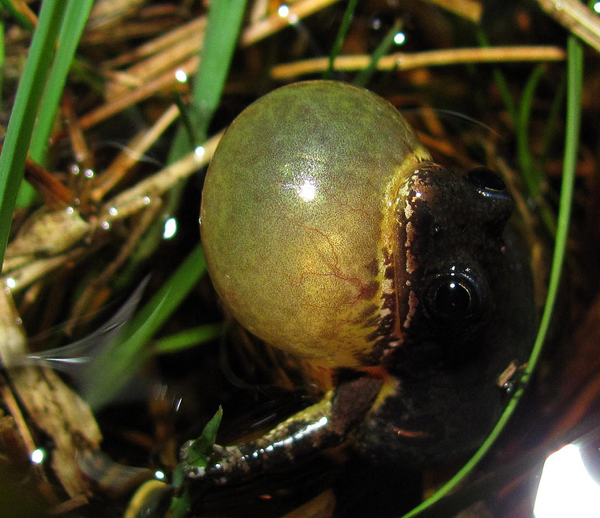 Their raspy trill sounds a bit like a fingernail slowly clicking along the teeth of a comb, increasing in pitch.

The thing that amazes me the most about this frog is how well they can hide! They usually croak loudly while hidden beneath a clump of grass, and these aren't necessarily big clumps either, but a small clump barely big enough to nearly cover the frog.  The Florida chorus frog calls with only its head above the surface, with all four feet holding onto nearby underwater grass blades for support. On rare occasions I have even seen these calling from dry land, and even then they're hidden deep beneath a thick tangle of dead grass. Also these seldom climb, but spend most of their time clambering through the low grasses and vegetation at or near ground level in constant search of the small insects, such as the tiny cricket nymphs they feed on. 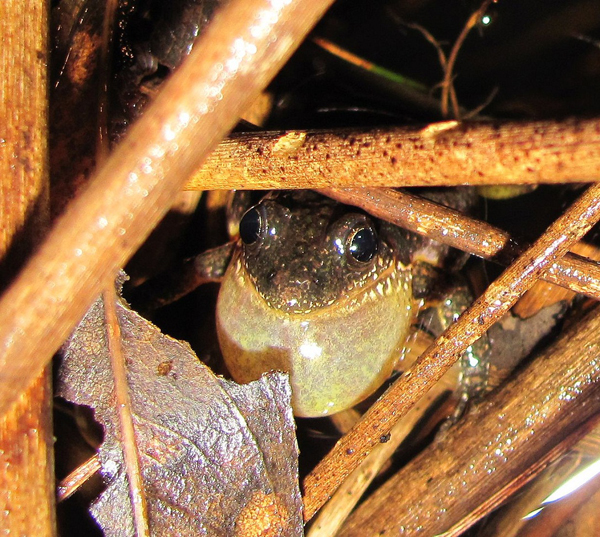 The Florida chorus frogs usually croak loudly while hidden beneath a clump of grass.

The only way to even spot these little guys is to sneak up on them in the ankle-deep water they breed in, and look for them actually croaking! If the vocal pouch isn't moving (such as if the frog stops calling as you approach it), you'll probably never spot that one – even though you're right over top of it. It's best to try for another frog at this point, and often like so many treefrogs and their relatives, the maddening chorus will all go silent the moment you step foot into the marsh, but within a few moments they will resume, and at this time you can make a hopefully-close approach! 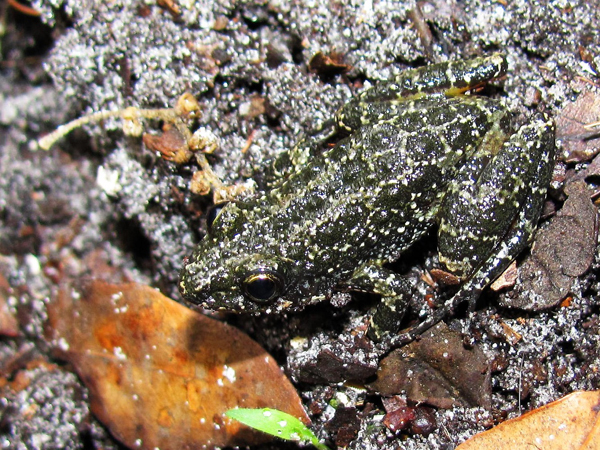 Chorus frogs blend in very well, and unless it's actually calling, you may never see it!

Don't be disappointed if you enter a large chorus and only spot two or three. Be thankful for those you DO see, as there's nothing to stop these shy little croaksters from slipping beneath the surface at the slightest alarm. When this happens they always rise to the surface to croak again, from beneath another little clump of grass nearby.

Concerning photography of this species, as always I like to get them in total habitat, untouched by me in any way. In some cases I will collect a few and place them in a setting where the whole frog will be visible. Of all the small species I have ever seen. I can hardly wait for the cooler weather to return to the area, which will once again bring forth these beautiful little frogs!

Concerning keeping them and captive care, these are so small and secretive they are of little value as pets. 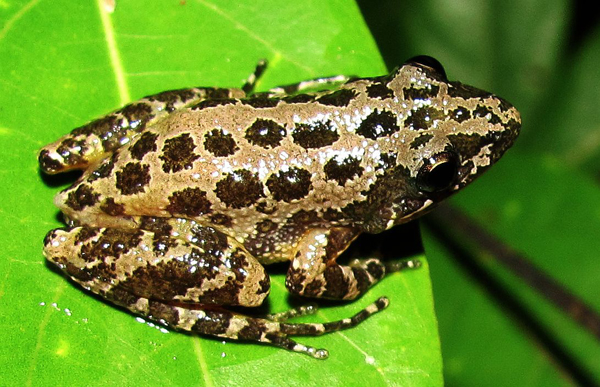 In some cases I will collect a few and place them in a setting where the whole frog will be visible.

"Nature" Joe (Myers) has been working with groups of people of all ages in an outdoor educational setting since 1986, and can be followed on Facebook, where his nature photography is displayed there publicly.