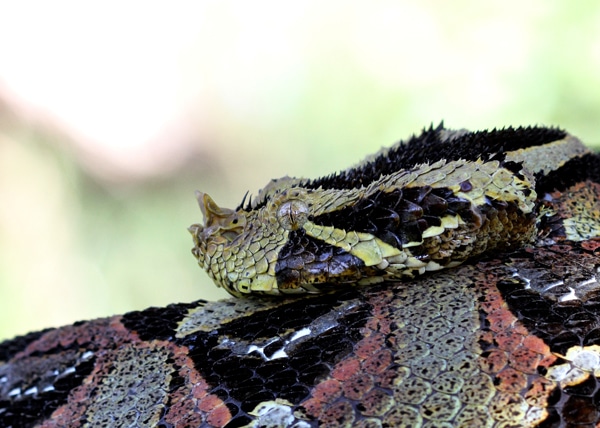 "After only a few minutes of searching, we found a Gaboon viper! The sheer joy of fulfilling one of my dreams was almost indescribable. I wa

"After only a few minutes of searching, we found a Gaboon viper! The sheer joy of fulfilling one of my dreams was almost indescribable. I wasn’t far from tears when I saw her. Emotion overwhelmed me, I had feelings which are so very difficult to describe."

My name is Jonas Arvidsson and I am a herpetologist from Sweden. My greatest interest is and has always been herpetology. Field work has become my great passion where I may photograph herptiles in their natural habitat. Over the years, I have had the pleasure of visiting lots of sites on several continents to try to find the snakes that I always wanted to see in their natural environment. 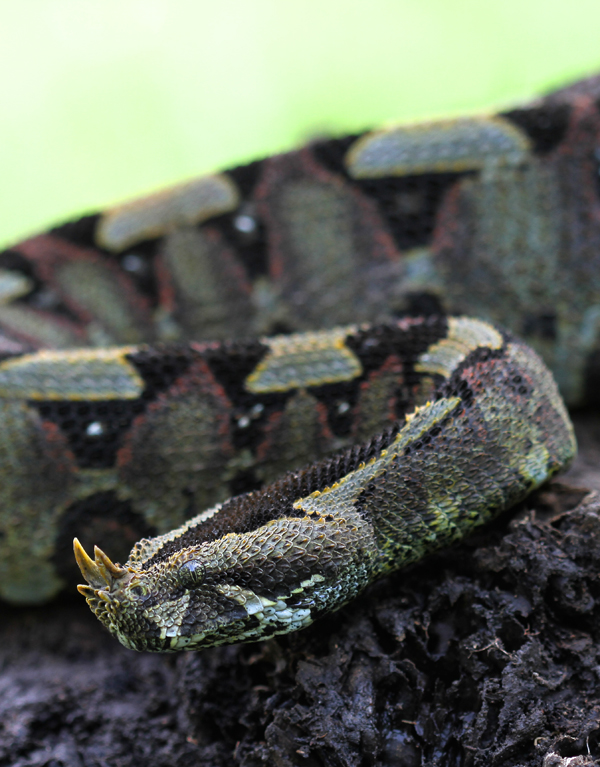 I realized quite early on that Uganda is a most appropriate place to begin to try to find them. There are three species of Bitis in Uganda, which are my favorites. I started off by searching on the Internet and looking on Youtube regarding Uganda. There I discovered the name of a man, Kazibwe Yasin who runs the reptile park, Uganda Reptile Village (URV). His work is dedicated to saving snakes from danger and educating the local people about the great importance of reptiles to the fauna. 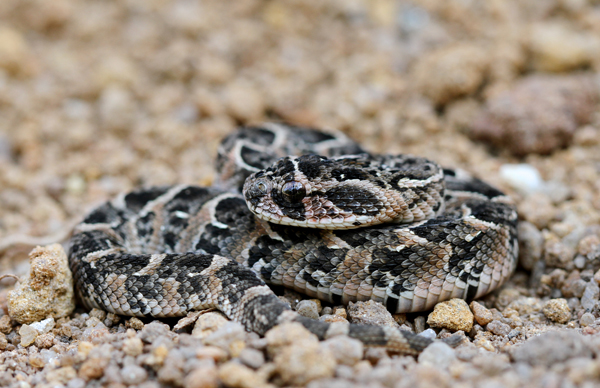 I decided to visit Yasin in January 2013 along with a couple of friends. Indeed he proved to be an incredibly nice person who is really passionate about herptiles.

During our first visit we mainly looked after ourselves as Kazibwe had injured one of his legs and was unable to be our guide. However we still managed to find a lot of interesting species, including Atheris hispida, Naja melanoleuca, Dispholidus typus and several of the chameleon species. 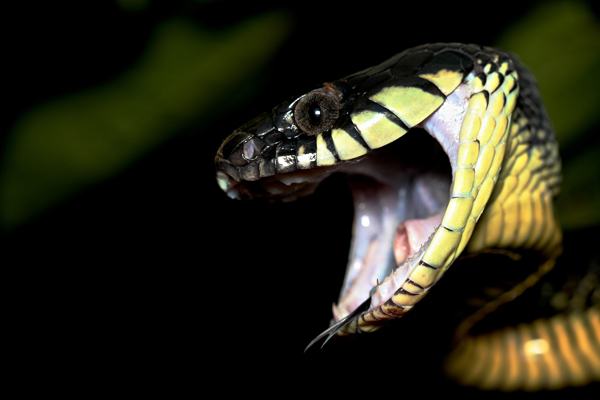 When I returned to Sweden, I wanted to help Kazibwe and the URV in some way, so I started to try to raise money through various activities. With the help of the Stockholm Herpetological Society (SHF) we succeeded in enabling Kazibwe to visit Sweden and hold lectures about his work and what is happening in Uganda. A number of people who heard the lectures were very troubled by the situation in the country with both deforestation and the collecting of reptiles to be sold to the pet trade. The situation is tragic with many species now on the verge of extinction due to this.

In 2014 I decided to make another trip to Uganda, because I did not see any of the Bitis species during my first visit. This time we chose to travel in the November/ December timeframe instead, when the first rainy season arrives. There quite clearly was a lot more activity regarding animals at this time of year. 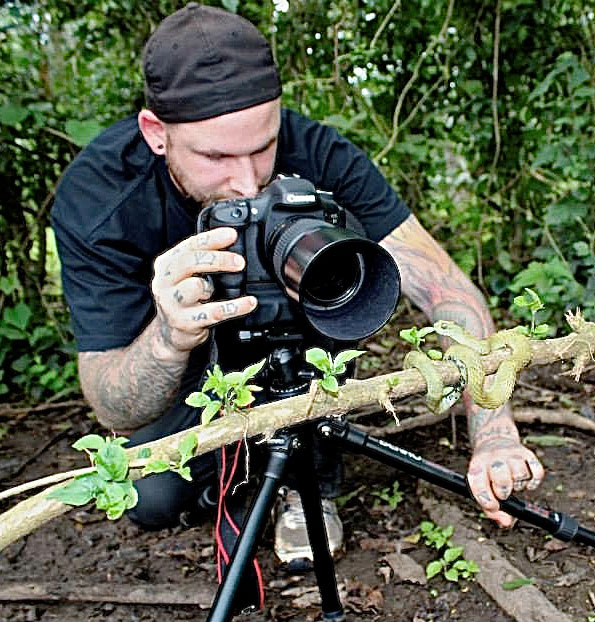 Shooting while keeping a safe distance.

Kazibwe promised to take us out to visit his special areas in order to get the opportunity to see the snakes that we came to see. He had arranged everything for us; a car, accommodations, and food for a field stay of 10 days.

On the very first day we found a spotted bush snake (Philothamnus semivariegatus). It was a pleasant and most unexpected species to find. On day two there was heavy rain and most of the group doubted that they would be able to see anything at all. However, stubborn as I am, I went out with Kazibwe anyway, and after only 15 minutes we found a green bush viper (Atheris squamigera). This is a species that was absolutely at the very top of my list of snakes that I was hoping to see. 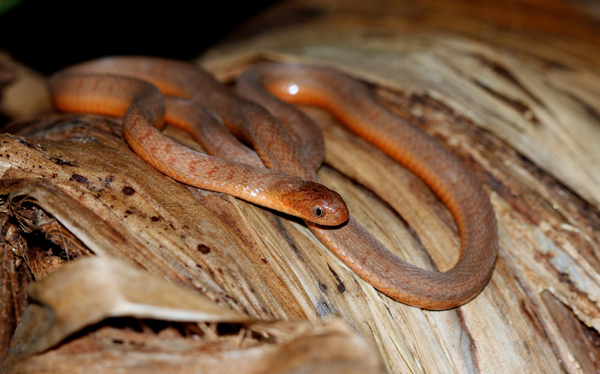 Kazibwe's friend received permission for us to be allowed to stay in a small village located in Mityana. In the surrounding areas there are plenty of small "pocket forests," small isolated forests located in the lower valleys. These forest pockets are ideal habitat for the Gaboon viper (Bitis gabonica) and Rhinoceros viper (Bitis nasicornis).

We found a female Gaboon viper which was 130 cm in length and weighed 4 kg. Only a few minutes after we had released that snake, Kazibwe's friend shouted “sangu” (snake) and proudly pointed to a green mamba (Dendroaspis jamesoni) just 100 m from where we stood. After several attempts we finally managed to get the mamba down from the tree, so that we could take some pictures. 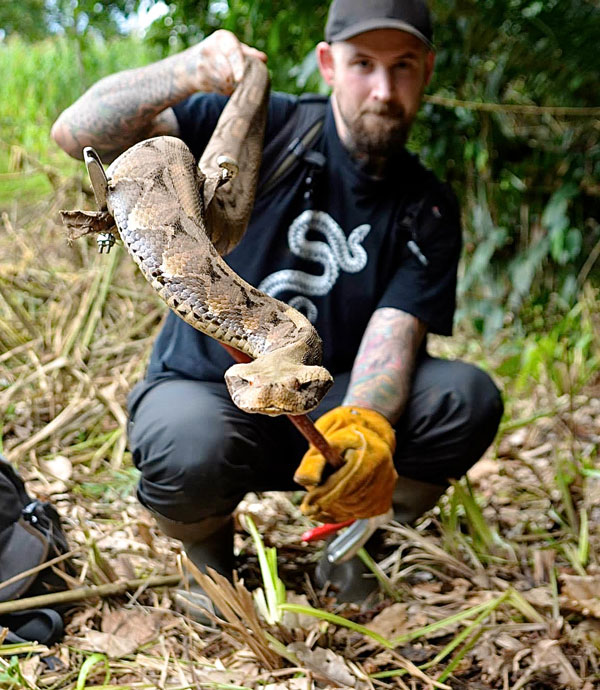 The author with a large gaboon viper.

The journey continued with the same good luck the whole time! We saw forest cobras, mambas, boigas and bush vipers just to mention a few. We made several new discoveries every day.

In the evenings we played billiards in the small village. It seems to be a major sport in Uganda. We were out in the forest between 8 a.m. until 2 p.m. In the evenings it was surprisingly difficult to find snakes. However, frogs and other animals were plentiful.

As the end of our 10 day field trip was approaching we decided to try to find the nasicornis again. We found a valley with a small stream that flowed through it and there was an abundance of roots covering the ground. This looked optimal for nasicornis.

Around 10 a.m. we finally found a really nice female lying on a branch about a meter above ground. We all jumped for joy at the discovery of the second dream species we wanted to see. The result at the end of the day became two nasicornis females.

On our very last field day we went out to the same place to see if we could find more of them. Then I heard Kazibwe and my friend Peter shout out that they had found a large male. When I eventually arrived at the discovery site, I was completely shocked. I saw immediately that it was not a large nasicornis. Instead it was a large hybrid between a gabonica and nasicornis (130 cm) and with the temperament of a puff adder! Eventually we managed to move the snake to a more open area so we could take pictures of it. 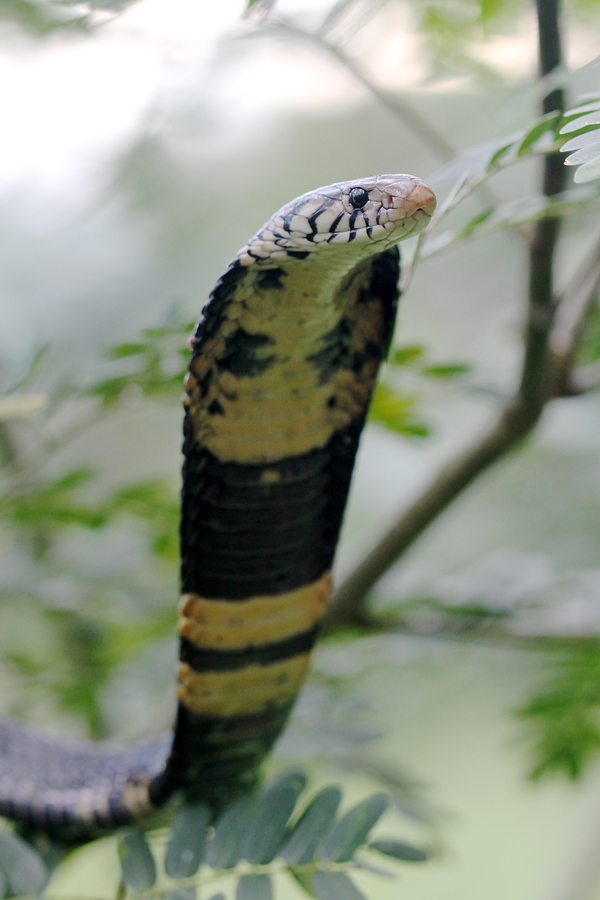 We felt that this was incredible; almost as if the trip was getting a little too good to be true considering all the things that we had been given the privilege of seeing on this journey.

We stayed at the URV for our last week. We still wanted to have a last chance of finding Bitis arietans. Kazibwe took us to an area in Entebbe, where he knew puff adders had been found previously. When we got to the place it indeed looked like a really promising area. It was dry and at a higher altitude with lots of burrows in the ground all over the forest. After only an hour in the forest, we saw 12 newborns. It was absolutely incredible to see them. The third species of Bitis that Uganda has to offer.

Having our local guide Kazibwe with us on this trip was invaluable. He has really set an exceedingly high standard, on this memorable herptile trip.

Uganda is a very safe country and there wasn’t any problem walking around and looking for snakes. However, one should be sure to have permission from landowners before you venture out. Generally, they're just happy that people are interested in their countryside. 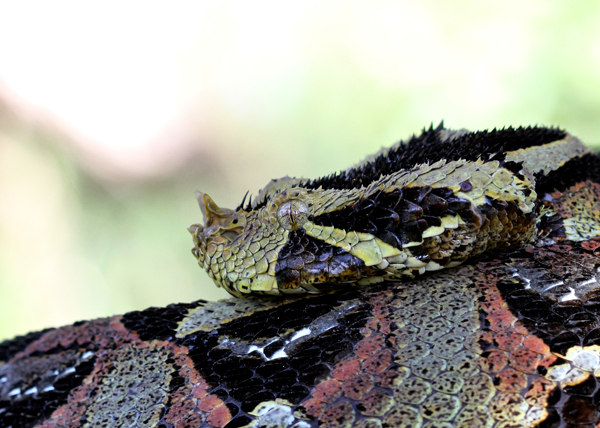 Uganda is a fantastic country in which to search for herptiles. It has incredible scenery and has really interesting species. So I can highly recommend a visit to the URV and do take advantage of the skills of Kazibwe and his assistants if you want a great field experience.

The final result of the number of snakes species we saw was almost 20 during those three weeks.

It is my aim to continue to support Kazibwe economically, so that he can continue his work with reptiles in Uganda. His sole income is from the visitors.