Emoia impar hasn't been documented in Hawaii since the 1960s.

Hawaii is home to several invasive species of lizards, including the Jackson's chameleon and the giant day gecko, among others. While these species have thrived in the islands, a native species has just been declared extinct by the United States Geological Survey. The copper striped blue-tailed skink (Emoia impar) was last seen on Kauai's Na'Pali coast more than 40 years ago. Field surveys conducted for 20 years from 1988 to 2008 on Kauai, O'ahu, Maui, and Hawai'i yielded no sightings of the lizard, which is described as a thin and streamlined lizard with a sky-blue tail. 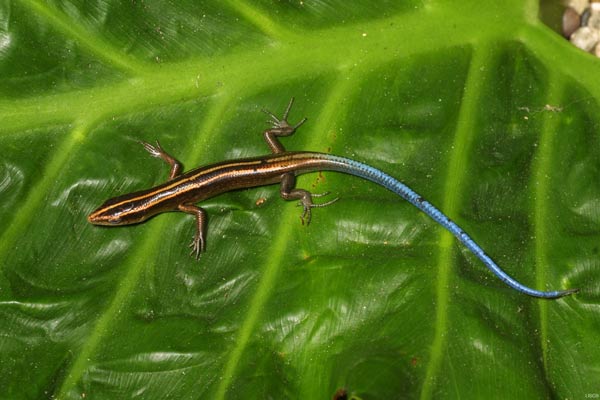 The copper striped blue-tailed skink, above, photographed in Samoa, is now extinct on the Hawaiian Islands.

"No other landscape in these United States has been more impacted by extinction events and species invasions in historic times than the Hawaiian Islands, with as yet unknown long-term cascading consequences to the ecosystem," Marcia McNutt, a U.S. Geological Survey director said in a prepared statement released by the USGS. "Today, we close the book on one more animal that is unlikely to ever be re-established in this fragile island home."

The skink was once a common sight throughout the Hawaiian Islands, and can in fact be found on other islands in the tropical Pacific. USGS Biologist Robert Fisher, co-author of the study "Cryptic extinction of a common Pacific lizard Emoia impar (Squamata, Scincidae) from the Hawaiian Islands" published in Oryx, the International Journal of Conservation, believes that Emoia impar may have become extinct due to the introduction of Pheidole megacephala, the big-headed ant. "There's some evidence that an invasive ant was preying on these skinks," Fisher said. "That's a new factor we'll need to examine as we look out for other at-risk species in the Pacific islands."

While Fisher and Ivan Ineich, co-author of the study, don't know exactly why the lizard became extinct, they believe that the extinction of island dwelling animals throughout the world share similar factors, including loss of habitat due to unchecked human development and the intentional or accidental introduction of invasive species.

Fisher and his colleague says that Emoia impar may have been a victim of what is called "cryptic extinction," whereby a species is confused with another similar species and that their extinction can occur decades before it is noted by scientists.

Reference to the study can be found at Oryx