Grand Cayman Blue Iguana Comes Back From The Brink Of Extinction

The Grand Cayman blue iguana, one of the largest iguanas, at around five feet and weighing 30 pounds, has come back from the brink of extinction, according to a July 18 report in USA Today. The fruit and vegetable eating reptile was apparently down to less than a dozen animals in 2002 on the island, the only place in the world that it calls home. Biologists in 2002 were at the island to discuss iguana conservation issues for all species in the Caribbean when they were asked by conservation biologist Fred Burton, head of the Blue Iguana Recovery Program, to craft a conservation plan for the blue iguana. 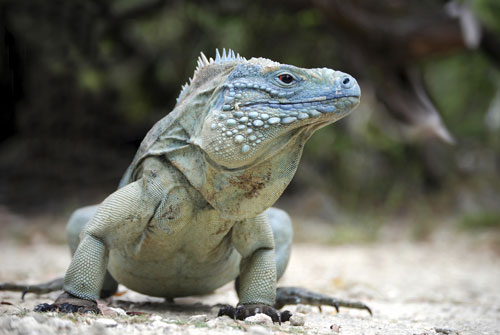 The blue iguana population now numbers around 500 animals and the project says that number should double to around 1,000 in the next two years.

The program has met with success. The biologists started a captive breeding program and were able to study how the animal lived and what they ate. One major obstacle to the survival of the species were the expanded roadways on the island, where the iguanas would sun, and get run over, and the large number of feral cats that preyed on the young reptiles. Feral cats were really the problem, Burton said in the report. They are found throughout the island and made the iguana part of their diet, Burton said. At the outset, the project knew nothing about the animals and the breeding program helped them garner the knowledge necessary to cement a successful endeavor.

The biologists initially were feeding the animals the wrong food, rabbit food, and housing them in enclosures that were too small. They realized the animals dined on fruits and vegetables, which was part of their downfall as the animals tended to live near fruit orchards on the islands, where many were killed and eaten by feral cats. The biologists learned to release the captive bred iguanas at 2 years old, big enough to fend off the cats.

With thanks to the captive breeding program, the blue iguana population now numbers around 500 animals and the project says that number should double to around 1,000 in the next two years.