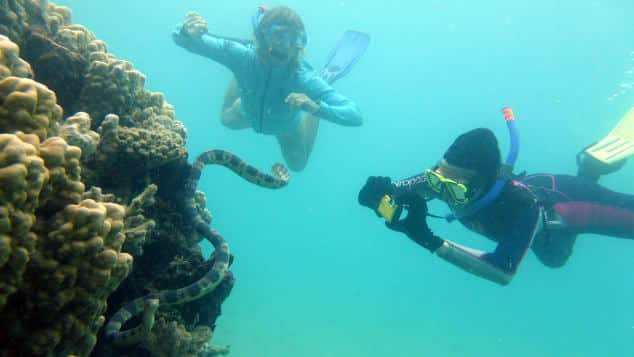 The population of greater sea snakes  (Hydrophis major) in Noumea, New Caledonia are much larger than previously thought, thanks to a group of snorkeling grandmothers known as “the Fantastic Grandmothers”  who worked with Dr. Claire Goiran from the University of New Caledonia and Professor Rick Shine from Australia's Macquarie University, to document them when they snorkeled. 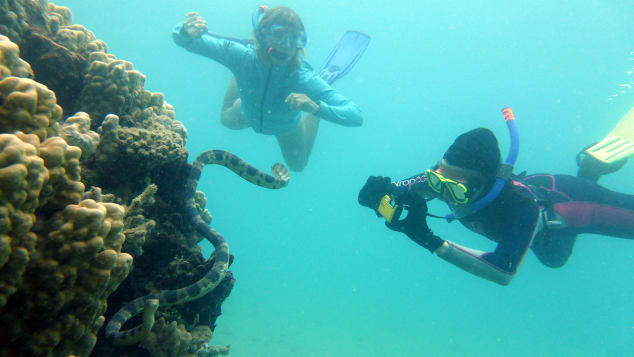 For 15 years, Goiran and Shine have been studying the presence of the turtle-headed sea snake (Emydocephalus annulatus) in New Caledonia, but during the first eight years of their study, they encountered the greater sea snake just six times. In 2013, they decided to study the 1.5 meter long venomous snake as well, but only saw 10 individuals on the reefs each year.

This is when the snorkeling grandmothers came in to help as citizen scientists. The seven women, who range in age from the 60s to 70s, went to work with cameras, offering to document what they saw when they snorkeled in a popular swimming area called Baie des Citrons. And what the grandmothers discovered was very promising.

"The results have been astonishing," Dr. Goiran said in a statement released by Macquarie university. "As soon as the grandmothers set to work, we realised that we had massively underestimated the abundance of greater sea snakes in the bay."

The citizen scientists have so far documented more than 249 of the reptiles in the bay alone. The photographs captured by the grandmothers have also revealed details about breeding patterns of the venomous reptiles as well as numbers of young, a trove of new information on these reptiles.

"I have been studying sea snakes in the Baie des Citrons for 20 years, and thought I understood them very well – but the Fantastic Grandmothers have shown me just how wrong I was," Dr. Goiran said.

"The incredible energy of the grandmothers, and their intimate familiarity with 'my' study area, have transformed our understanding of the abundance and ecology of marine snakes in this system. It's a great pleasure and privilege to work with them."