Woman calls 911 to break up fight between gopher snake and squirrel.

Pet snake owners are almost always encouraged to feed their snakes with frozen thawed or fresh killed feeders when at all possible due to the fact that live prey can fight back and sometimes even become the predator. The video of a ground squirrel attacking a gopher snake (Pituophis catenifer sayi) by a Gold Canyon, Ariz. firefighter further drives home that recommendation. 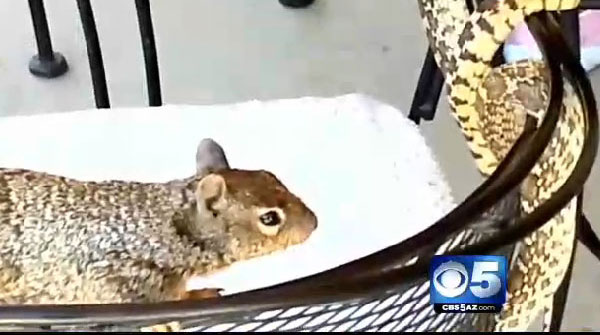 Gopher snake and ground squirrel go at it.

A woman in the city called 911 to report a fight between a ground squirrel and a gopher snake, according to a CBS 5 AZ news report. When firefighter Ryan Philips arrived at the scene, before breaking up the fight, he took a video of the two arch enemies going at. The squirrel, which the snake probably thought would have made an excellent meal, decided that it was not ready to go down without a fight, and from the looks of the video, it won. According to Philips the squirrel was clearly the aggressor in this brawl and when the snake was released back into the wild, in had a few cuts on it from the fight with the squirrel.