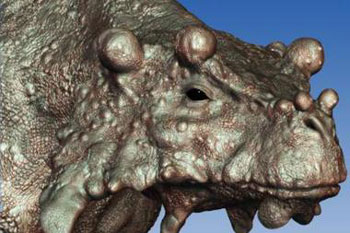 Bunostegos had knobby-like growths on its head and lived in semi-arid and arid regions of Pangea.

A knob-headed reptile that probably looked like a cow, was a vegetarian, and roamed the earth when the earth was a single supercontinent called Pangea supports the notion that in the middle of Pangea lied an isolated desert with fauna not found in other regions of the supercontinent.

The reptile, known as Bunostegos was a Pareisaur, a family of reptiles that lived 266-252 million years ago. As with all Pareisaurs, Bunostegos was a vegetarian and had bony knobs on its head and face. In fact, according to a recently released paper published in the Journal of Vertebrate Paleontology, Bunostegos'knobs were the largest of any Pareisaurs discovered. The researchers speculate that the knobs were covered horns like that of the modern day giraffe.

"Imagine a cow-sized, plant-eating reptile with a knobby skull and bony armor down its back," said lead author Linda Tsuji.  The genus Bunostegos means "knobby roof." While these characteristics first seem to show that the reptile was an evolutionarily advanced animal, it also had primitive characteristics. Tsuji concludes that the Bunostegos' primitive characteristics are the result of convergent evolution and that its genealogical lineage was isolated for millions of years. Tsuji and her colleagues suggest that the reptile was isolated by climatic conditions that kept them as well as other reptiles, amphibians and other flora and fauna isolated in the central region of the supercontinent. This long isolation gave Bunostegos time to evolve its anatomically odd features.

Based on geological data, the central Pangea where Bunostegos lived (in what is now Niger) was extremely dry or hyperarid, which kept other animals from thriving or even passing through the area and kept those animals who lived in the area from leaving. The area, which is lesser studied, provides an important and meaningful contribution to the interpretation of the Permian Fossil record, scientists said.