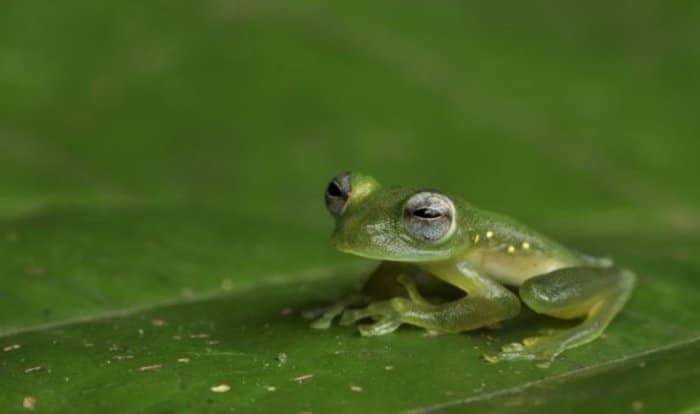 Glass Frogs Are Translucent As A Form Of Camouflage, Study Says

Their bodies are translucent to fool predators.

Glass frogs, those small arboreal frogs of the family Centrolenidae, are called glass frogs due to their translucent underbellies. And the reason why they have bellies that are almost see through is due to camouflage. That's right, their bodies are translucent to fool predators into thinking that they are just a tree leaf rather than a tasty morsel, according to the study "Imperfect transparency and camouflage in glass frogs" which was just published in PNAS.

“The frogs are always green but appear to brighten and darken depending on the background," Dr. James Barnett, a behavioural ecologist at McMaster University and lead author said in a press release put out by the University of Bristol. "This change in brightness makes the frogs a closer match to their immediate surroundings, which are predominantly made up of green leaves. We also found that the legs are more translucent than the body and so when the legs are held tucked to the frog’s sides at rest, this creates a diffuse gradient from leaf colour to frog colour rather than a more salient sharp edge. This suggests a novel form of camouflage: ‘edge diffusion’.”

Barnett noted that glass frogs are almost always green, though they lighten and darken depending on the background area in which they are surrounded. Others also have debated whether these amphibians can be called translucent at all.

Transparency is, at face value, the perfect camouflage. It is relatively common in aquatic species where animal tissue shares a similar refractive index to the surrounding water," Barnett said. "However, air and tissue are quite different in their refractive indices, so transparency is predicted to be less effective in terrestrial species. Indeed, terrestrial examples are rare. Although glass frogs are one commonly cited example of terrestrial transparency, their sparse green pigmentation means they are better described as translucent,” he said.

The paper noted that the study details very good evidence that the glass-liken appearance of these frogs are indeed transparent.

An abstract of the paper can be reviewed on the PNAS website.