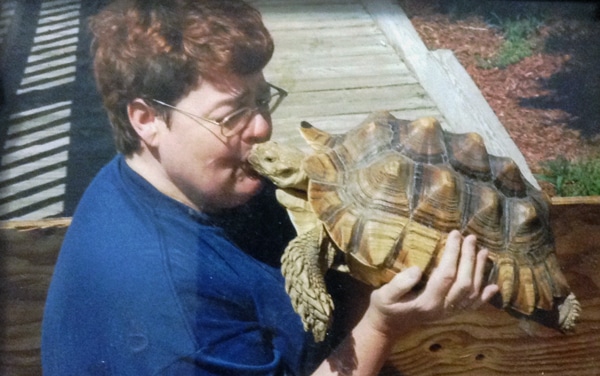 A woman has cared for more than 100 reptiles over the years.

I have been rescuing and rehabing and occasionaly re-homing reptiles since 2000. I am not an expert or have any degree. . . I treat my reptiles as if they were "special needs" kids. . . I refer to them as my kids. I have a blue rhino iguana "rescued at the tune of $1,000 from a pet store that was "shady" to say the least and finally went out of business, but not before i got her. I named her Lola and  she is currently 4.5 feet in length, weighs 20.9 lbs and has some mental baggage that came with her as she was bought and brought back three times before i brought her home nine years ago. 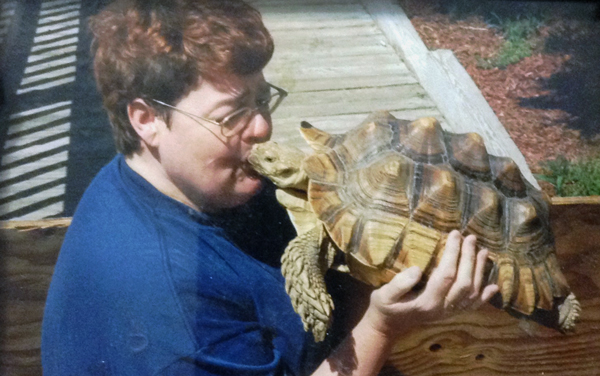 Erin Grady has been rescuing reptiles for years.

She was in a 5 x5 foot plexiglas enclosure along with two 40 lb. sulcata tortoises. Her basking spot consisted of a cement brick with a BBQ grill on it to sit on underneath a lamp. She still after all these years has the bite marks of the sulcata tortoises' mouths on each knee where they bit her.

Lola has two best friends, my 15-year-old cat Baby and Max my male Russian tortoise that was given to me after a mom bought him for her son but he got bored because Max didn't do anything to entertain him. Max has more personality than most people I know, which is the same with the rest of my kids over the past 15 years I have had them. I have rescued more than 100 reptiles over the years. Some only lasted a day and died, some a few months and the kids I have now. . . Max and his "girl friend" Air-ee, a female Russian tortoise I got a year before Max 8 yrs ago who just "hooked up", as did my two northeastern three-toed box turtles my sister-in-law brought home after a day of hiking. She did not know that was a big no-no. She did this 35 years ago and they just happened to be a pair. I have had them 10 years next month.

Max will go lie down when Lola is sleeping under her light and rest his head on her stomach.  It is so cute. The turtles and tortoises all eat and sleep together they have a room of their own where they are not in cages or tanks. They free roam.  I also have had rescued bearded dragons, green iguanas, and uromastxy over the years . Most of my rescues were bought from pet stores. I quarrantine them and introduce the new ones and everyone lives happily ever after, well except for Sheldon my veiled chameleon. He stays up in his fig tree(fake) that is attached to a curtain rod about 10 feet off the ground.  He doesn't want anything to do with Baby and Lola.

I have been told for years I need to write a book about my kids and being just 61 yrs old maybe I should. All my kids are in my will. Yes I made provisions for them.

I have a phenomenal vet who I have worked very close with over the years and I also have had a subscription to REPTILES magazine for the last nine years.

I call it my gift from St. Francis of Assisi, who I pray to for my kids all the time. That magazine has helped me in more situations with my "kids" than I can count. I tell everyone who has a reptile that after they get their pet and complete set up, Get a subscription to REPTILES magazine. I just can't imagine not having it in my life with my kids.