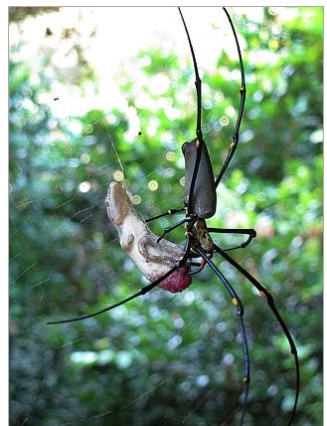 Golden orb spiders are known to eat small reptiles and even birds that become entangled in their webs.

Two-headed Monocled Cobra Found In India
Researchers Discover Ancient Lizard With Four Eyes, But They're Not What You Think
What Aquatic Turtle Can Live In A Tropical Fish Aquarium?

An Australian golden silk orb spider (Nephilia edulis)  was photographed in Kamerunga, Australia making a meal of what looks to be a common house gecko. The photo, which has gone somewhat viral was taken by Linden Woodward, media adviser at Australia's James Cook University. Woodward was sitting in her kitchen when she noticed the spider eating something that she couldn't immediately identify. She told the Cairns Post that the coloration of the prey item, pinkish gray is what first caught her attention.

Upon further inspection, she noticed that the spider was feasting on a gecko that was trapped in the web. The day after the spider consumed the gecko, a grasshopper got entangled in its web and it too was eaten, Woodward said.

The Australian golden silk orb spider is a large spider (females grow to 23mm) that is known for the fantastical webs that they weave, and for the prey in which get entangled in those webs. In addition to Australia, they are common in New Guinea and New Caledonia. They spin webs that are about one meter in diameter and are protected by barrier webs on each side of the main web. In addition to lizards, the golden silk orb spider is known to eat snakes and small birds that their webs capture.