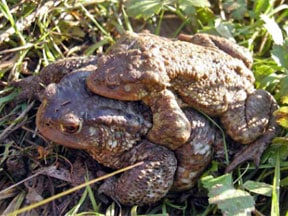 Female toads are larger than males. They also have a more contrasting coloration and sharper tubercles than males. Males have longer and stockier forelimbs, with nuptial pads on the first two or three fingers.

Males attain sexual maturity in three to four years; females in four to five years. Wild toads at low altitudes usually start breeding in February or March, but they have been known to begin as early as December during mild winters. In colder habitats they breed in April or May. The breeding period lasts from a week to a month. 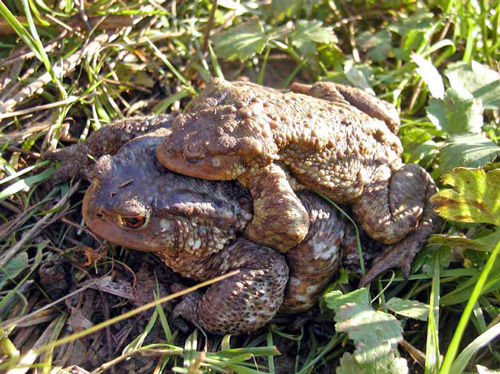 Bufo bufo is hardy and easy to breed.

Amplexus is axillary, and it may sometimes occur on land. In such cases, females will transport males on their shoulders to the water. More frequently, amplexus takes place in the water. Males arrive at breeding ponds and streams about 20 days before the females and start calling. Their call is the lowest among all European anurans.

During egg deposition, a male will help extract the eggs from the female’s cloaca. Up to 10,000 eggs, each measuring less than 2 mm in diameter, are laid in two mucilaginous strings, 0.40 to 0.80 inches thick and up to 16 feet long. These are sometimes attached to aquatic plants. The male covers the eggs with sperm as the female lays them, and fertile eggs usually hatch in a couple of weeks.

Wild European toad populations suffer big losses each year during breeding migrations, when many hundreds are killed by cars. To avoid this carnage, some European communities have predisposed special canals under the streets, and fences have been erected along both sides of roads the toads would otherwise attempt to cross. Numerous volunteers help toads cross the streets safely during the crucial breeding period.

I recommend hibernating captive toads if you want to breed them. You can achieve this by placing two individuals in a plastic container measuring 12 inches long, 12 inches wide and 5 inches tall, and then placing the container in a refrigerator set at 39 to 41 degrees for two months. Before doing so, make sure to stop feeding them a week prior so that their guts are empty. During their hibernation, you should check on them as often as you are able, and sprinkle water on them once a week. Once the two-month period is over, you can place them in a breeding enclosure and simulate rain. Temperatures can be increased to normal almost right away. In general, toads and amphibians don’t tolerate high temperatures, so even for reproduction, the temperature must be maintained between 50 and 65 degrees.

Keeping a few males with a single female will increase the chances of successful reproduction; four or more, however, could be dangerous for the female. Captive toads will not produce the number of eggs wild toads do, probably because they have less room and fewer males are copulating with a single female. In any case, it would be very wise to keep only a low number of eggs to increase your successful raising of toadlets. You should have an idea about what you plan to do with the toadlets even before you attempt to breed the adults.

Your breeding enclosure must be large. When the males begin calling to the females and also grasping them, it is time to place them in a large plastic basin filled with 2 to 3 inches of water. The basins must be as big as the usual terrestrial containers the frogs are kept in or even bigger. Be careful with this, because the amount of water during breeding time is very important. If there’s not enough space, they cannot breed! Provide a rock and a branch or a strong plant. The rock is a place to let the toads rest a bit, and the branch or plant is to give the female somewhere to attach the tip of the string of eggs.

The dorsal and caudal skin of a European toad tadpole is black and very smooth. The belly is grayish, the mouth is as wide as the distance between the eyes, and the spiracle is on the left side and facing backward. The tail is long, with a rounded tip.

In the first days of life, tadpoles remain attached to the birth strings with their mouths. Larval development lasts two to three months. Tadpoles can be kept in groups; provide a gallon for every four tadpoles. Use fresh, dechlorinated water. Bufo bufo tadpoles are very sensitive to metals and pollutants, so change their water every day.

Feed tadpoles small quantities of food daily. If the food is not totally consumed in a couple of hours, change the water immediately – they are extremely delicate! Initially, tadpoles are herbivorous, and you can offer tablets, herbivorous fish flake food and algae. You can also offer pieces of boiled vegetables, such as zucchini and lettuce. From the middle of the stage, when the hind legs have come out and the fore legs have started to, and onward, offer tablets and flakes for omnivorous or carnivorous fish, as well as Chironomus, Daphnia, Tubifex, small pieces of earthworms, etc.

The hind legs will appear first, followed by the forelimbs. When tadpoles are about to metamorphose into toadlets they will stop eating. Over approximately two days of metamorphosis they lose the tail and start using their lungs, and their gastric system changes from omnivorous to insectivorous.

As soon as you see an individual with four limbs and a reduced tail, prepare a small tank with less than 1 centimeter of water in the bottom. A rock that breaks the surface should also be provided. Add water as necessary.

Even tough Bufo bufo is the largest anuran in Europe, its toadlet is the smallest, measuring 7 to 12 mm. They have tubercles and orange-red parotoid glands, while the back is uniformly olive-gray. Feed them daily (though they typically won’t eat until three or four days after metamorphosis) with Drosophila melanogaster, Enchytraeus, newly born crickets and mealworms. Later you can offer small flies, mosquitoes and pieces of worms.

A group of a dozen toadlets can be kept together in a 10-gallon aquarium, with a substrate of wet paper towel that should be changed every day, and a very shallow water container (such as a jar lid) and a piece of cork bark for shelter. If fed and cleaned regularly, the toadlets will grow quickly into hardy toads that can be fun to observe.