How to breed Chinese fire-bellied newts 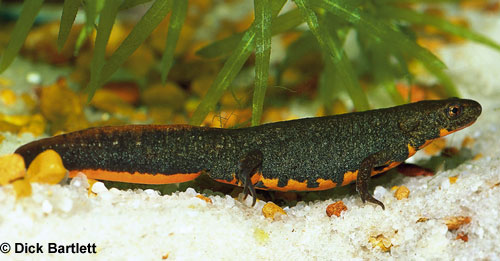 Sexing ready-to-breed adult Chinese fire-bellied newts is not difficult, but juveniles and newts not ready for breeding may be impossible to sex. The tissues at the sides of the vent (cloaca) greatly swell in males as special glands needed for breeding develop. In female newts the sides of the vent do not become swollen. Males usually have higher tail fins than females and exhibit an iridescent, pale blue wash on the sides of the tail that is absent in females. When ready to breed, females swell with eggs and look distinctly inflated.

Newts of both sexes should be separated and cooled before breeding. Put males and females in plastic containers with an inch or so of clean water. Over the period of a few days, drop the temperature from the normal 70 to 75 degrees to 40 to 50 degrees. Stop feeding or restrict the food to living items that will not spoil quickly, such as blood worms and small crustaceans. Hold the newts under these conditions, which simulate cool natural winter conditions in China, for four to six weeks. Replace the water each week. You may have to place the newts’ containers in a refrigerator during the cooling period. Watch the temperature carefully, and do not freeze the newts.

Bring your newts back to 60 degrees over a period of a week, and return them to their aquarium. Feed the newts heavily on tubifex, blood worms and earthworms to revitalize the newts and brighten their colors. A male newt should display his blue tail color and actively hunt for females, rubbing his head and body on females and fanning them with his tail, which releases sex pheromones. He deposits several spermatophores, jelly bases with sperm caps at the top, on a hard surface in the aquarium. Then he guides a female over the spermatophores, and she takes a sperm cap into her cloaca. Fertilization is internal.

A few days later, the female newt lays 50 to 200 small eggs that often are wrapped in the leaves of elodea and other aquatic plants. The parents may eat the eggs, so move the eggs to a new aquarium. They hatch in about three weeks, producing tiny black larvae with yolk sacs that feed them for a few days. Then they start feeding on daphnia, crushed fish food flakes and finely chopped worms. If you see cannibalism, separate the larvae into several smaller groups.

Expect them to start looking like the adults in three or four months. They will want to leave the water as the gills disappear. At this point, each baby newt should be placed in a small container with a gravel or moss island that lets it leave the water. Feed them larger foods as they grow, and hold them in a wet terrarium with moss on the bottom. The young newts are terrestrial until they reach sexual maturity in about two years and then return to the water permanently.