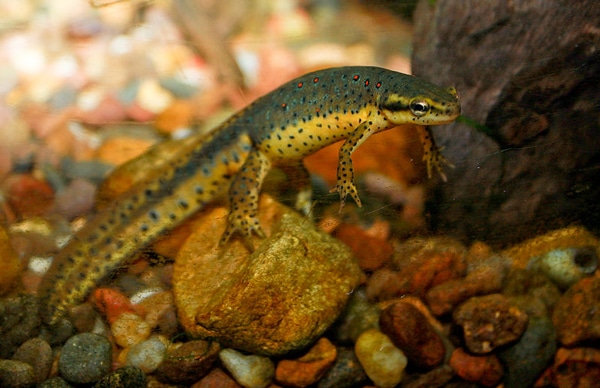 Life Span: About 12 to 15 years. Most eastern newts have lives divided into three distinct life stages. The first stage is the larval stage where the newt has gills and lives much like a tadpole. Although it is unclear how long this stage lasts, it finishes for most subspecies once the gills, shrinking as they become less functional, are absorbed back into the body. At this point the newt transforms into the eft stage, which is its land-dwelling stage. Totally terrestrial, an eft is bright orange with darker red spots outlined in black. After two or three years the eft finds a pond and transforms into the aquatic adult stage, which it retains for the rest of its life. At this point it becomes an olive green.

Range: This newt ranges throughout most of eastern North America from the Canadian Maritime Provinces west to the Great Lakes and south to Texas, Alabama, Georgia and Florida.

Natural Habitat: Deciduous and coniferous forests. Immature larvae and adult newts live in small bodies of fresh water usually with mud bottoms. Adults can survive on land if their aquatic habitat becomes unsuitable, such as during dry periods when water is low. The juvenile eft stage lives in lakeshore and woodland habitats, and it is often seen in forest litter on rainy nights.

Captive Housing: Up to three adults can be housed in a 10-gallon aquarium. Fill it halfway with dechlorinated water, and cover it with a screen lid to offer adequate ventilation. Water quality is important, and a filter is essential. Replace about 20 percent of the water weekly. Water temperatures should stay between 60 and 70 degrees Fahrenheit. A haul-out area is also required. Make one using driftwood, cork bark or basking platforms, such as those used for turtles. Plastic or live plants can provide aquatic hiding places in addition to a submerged cave, such as a clay pot or other heavy hiding spot.

Three efts can be housed in a 10-gallon terrarium. Use soil or coconut fiber for bedding, and include a few hiding places. Provide a water bowl about 2 inches deep and about 6 inches in diameter along with daily light misting. A full-spectrum fluorescent lamp with a low UVB output suitable for amphibians can be provided for simulated sunlight, and it enhances the look of both habitats.

Diet: Mainly carnivorous. Regardless of their life stage, they can be fed red worms, live or frozen brine shrimp, earthworms, and commercial amphibian diets. Remove any uneaten food to keep their habitats clean.

What’s Available: Commonly found throughout most of their range, wild-caught newts comprise the majority of pet trade offerings. Red-spotted newts (N. v. viridescens) are the most common subspecies in the pet trade. Some are captive bred, but numbers are still too low to provide a viable alternative to field-collected newts.  REPTILES

This newt is capable of locating its home pond through true navigation using its sense of smell and a light-dependent magnetic compass built into its body.