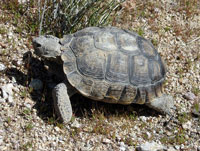 Desert tortoises in a stretch of the Mojave Desert in Southern California are being moved to make way for a solar thermal power plant.

Desert tortoises (Gopherus agassizii) in Ivanpah Valley in the Mojave Desert are being relocated to make way for a solar thermal power plant in Southern California. Dozens of biologists and contract workers participated in a search for the desert tortoises, which will be kept in quarantine pens with artifical burrows, possibly for several months, until they are released elsewhere in the region in an area that is deemed disease- and predator-free, according to news sources.

In September, the California Energy Commission approved BrightSource Energy's plan to build the 370-megawatt facility on public land. According to news sources, environmental groups are opposed to the construction, citing the negative impact it could have on native plants and the desert tortoise, which is protected under the Endangered Species Act.

There is no way to tell whether some of the desert tortoises, which spend much of their time in burrows, have been left behind at the Ivanpah Valley solar thermal power plant construction site. According to news sources, there is concern that the desert tortoises that are relocated may have difficulty adjusting to an unfamiliar landscape and could be more vulnerable to predators, disease, dehydration and even passing vehicles.

Supporters of BrightSource's project, the Ivanpah Solar Energy Generating System, say the benefits of the project outweigh the potential negative environmental impact. According to BrightSource's website, the solar thermal power plant will generate 1,000 jobs at the peak of construction and prevent 450,000 tons of carbon dioxide emissions per year.