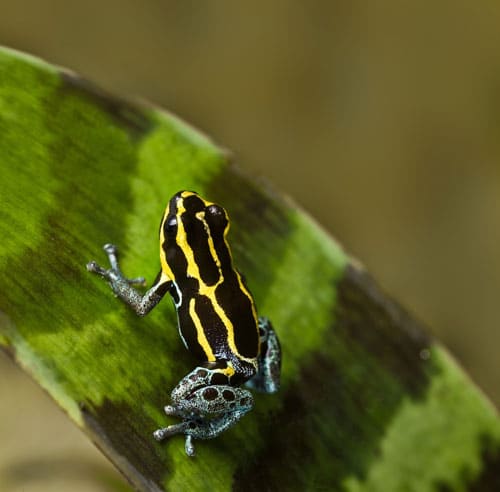 Natural selection has played a key role in the development of the many skins patterns associated with the tiny Ranitomeya imitator poison dart frog, according to a new study by University of Montreal biologist Mathieu Chouteau. His methodology in reaching this conclusion was rather unusual.

On three occasions over three days, at two different sites, Chouteau investigated the number of attacks that had been made on fake frogs, by counting how many times they had been pecked. It soon became apparent that those that were attacked the least looked like local frogs, while others modeled on frogs that came from another area had obviously been targeted.

The brightly colored dart frogs that are found in tropical forests are in fact sending a clear message to predators: "don't come near me, I'm poisonous!" But why would a single species need multiple patterns when one would do? It appears that when predators do not recognize a poisonous frog as being a member of the local group, they attack in the hope of having found edible prey.

"When predators see that their targets are of a different species, they will seize them. Over the long term, this then explains how patterns and colors become uniform in an area," said Bernard Angers, who directed Chouteau's doctoral research.

A total of 3,600 life-size plasticine models, each less than 0.4in (1cm) long, corresponding to the size of the frogs, were used in the study. The group was divided between two carefully identified sites in the Amazon forest. "The trickiest part was transporting my models without arousing suspicion at the airport and customs controls!" Chouteau said.

He chose plasticine following a review of scientific literature. "Many scientists have successfully used plasticine to create models of snakes, salamanders and poison dart frogs." The Peruvian part of the forest proved to be ideal for this study, as two radically different looking groups of frogs are found there: one, living on a plain, has yellow stripes, and the other, living on a mountain, has green patches.

The two colonies are just over 6 miles (10km) apart. Nine hundred fake frogs were placed in each area in carefully targeted positions, with various combinations of colors and patterns being used.

Chouteau was particularly surprised by the "very small spatial scale at which the evolutionary process has taken place." A distance of just a few miles had allowed for sufficient separation to allow a clearly different adaptation to take place. "A second surprise was the learning abilities of the predator community, especially the speed at which the learning process takes place when a new and exotic defensive signal is introduced on a massive scale," Chouteau said.

This process could be at origin of the wide range of color patterns that are observed not only in frogs but also in many species of butterflies, bees, and other animals. Mathieu Chouteau is now pursuing this line of investigation, and currently undertaking post-doctoral research into Heliconius butterflies. "Since this kind of project requires regular field work, I have taken up residence in the small Peruvian town of Tarapoto, where I am responsible for the opening of a research center that will facilitate the study of neotropical butterfly mimicry," he added.