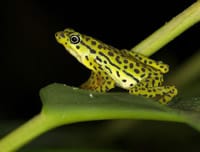 Researchers are searching for "lost" amphibians around the world.

Teams of scientists around the world have been searching over the course of five months for “lost” amphibians, representing species considered to be potentially extinct but which may be holding on in a few remote places. This quest, based on a list of 100 species, was coordinated by Conservation International and the IUCN Amphibian Specialist Group.

The amphibian search took place across 14 countries on five continents, and is the first ever coordinated effort to find such a large number of "lost" creatures. It comes as global amphibian populations are suffering a shocking decline – with more than 30 percent of all species threatened with extinction.

Many of the amphibians that the scientists were looking for have not been seen in several decades or even longer, and establishing whether populations have survived is vital to give more insight into the recent amphibian extinction crisis.

Vital Roles
"Amphibians are particularly sensitive to changes in the environment, so they are often an indicator of damage that is being done to ecosystems," said Conservation International's Dr. Robin Moore, who has organized the search for IUCN's Amphibian Specialist Group. “They also provide many important services to humans such as controlling insects that spread disease and damage crops, and helping to maintain healthy freshwater systems. The chemicals in amphibian skins have also been important in helping to create new drugs with the potential to save lives, including a painkiller 200 times more potent than morphine.”

The problems amphibians face from habitat loss have been massively exacerbated by a pathogenic fungus, which is the cause of chytridiomycosis, a disease that has wiped-out entire populations of amphibians and even whole species.

Disappointing Results
Moore and his team drew up a list of the Top 10 species out of the 100 that they determined would be particularly exciting to find. Moore said, "While it's very challenging to rate the importance of one species against another, we created this top 10 list because we felt that these particular animals had a particular scientific or aesthetic value."

Unfortunately, in spite of extensive searches, only one of these amphibians was rediscovered. It was the Rio Pescado stubfoot toad (Atelopus balios), which lives in Ecuador. It had not been seen since April 1995, but has managed to survive in at least one locality. Members of this genus have been particularly badly-affected by chytridiomycosis.

The results were even more disappointing overall, in the sense that only four out of the 100 target species were rediscovered, although several previously unrecorded species of amphibian have been documented as a result of this search.