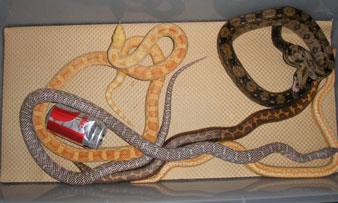 The Minnesota Supreme Court will not hear snake breeder Scott Nellis' appeal to overturn two citations he received by the city of Coon Rapids for breeding and selling snakes out of his home. Without commenting, the court denied a petition for review of Nellis' case that was filed October 30 by his attorney following the state's court of appeals decision that affirmed the actions of the city's board of adjustment and appeals. 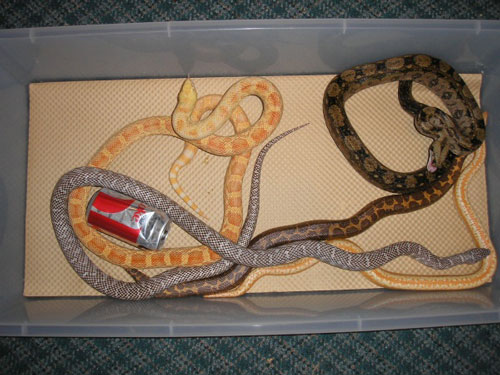 Some of the snakes in this box are illegal to keep in Coon Rapids, Mich. while others are not.

The city's board rejected Nellis' appeal of the citations issued by the city in 2012 that accused Nellis of violating the city code of maintaining an illegal home business and keeping "non-domestic" animals, his collection of certain species of boas and pythons. The citations ordered Nellis to remove all the snakes that are prohibited under the city code, reduce the square footage of his home that was used for his home occupation to no more than 25 percent of the habitable square footage of the home and reduce the ammonia levels in his home to less than one part per million. No ammonia can be detected outside his home.

In 2010, the city passed an ordinance banning the possession of pythons and boa constrictors, and introduced another that limits the number of domestic animals to 12, which Nellis said was targeted directly at him and his business.

Nellis believed that the Coon Rapids Home occupation ordinance was unconstitutional. He thought that it was vague and the non-domestic animal clause did not have a grandfather clause, which he thought was a violation of his equal protection rights under the 14th amendment of the Constitution.  Nellis has been keeping and breeding snakes in his home since 1996.